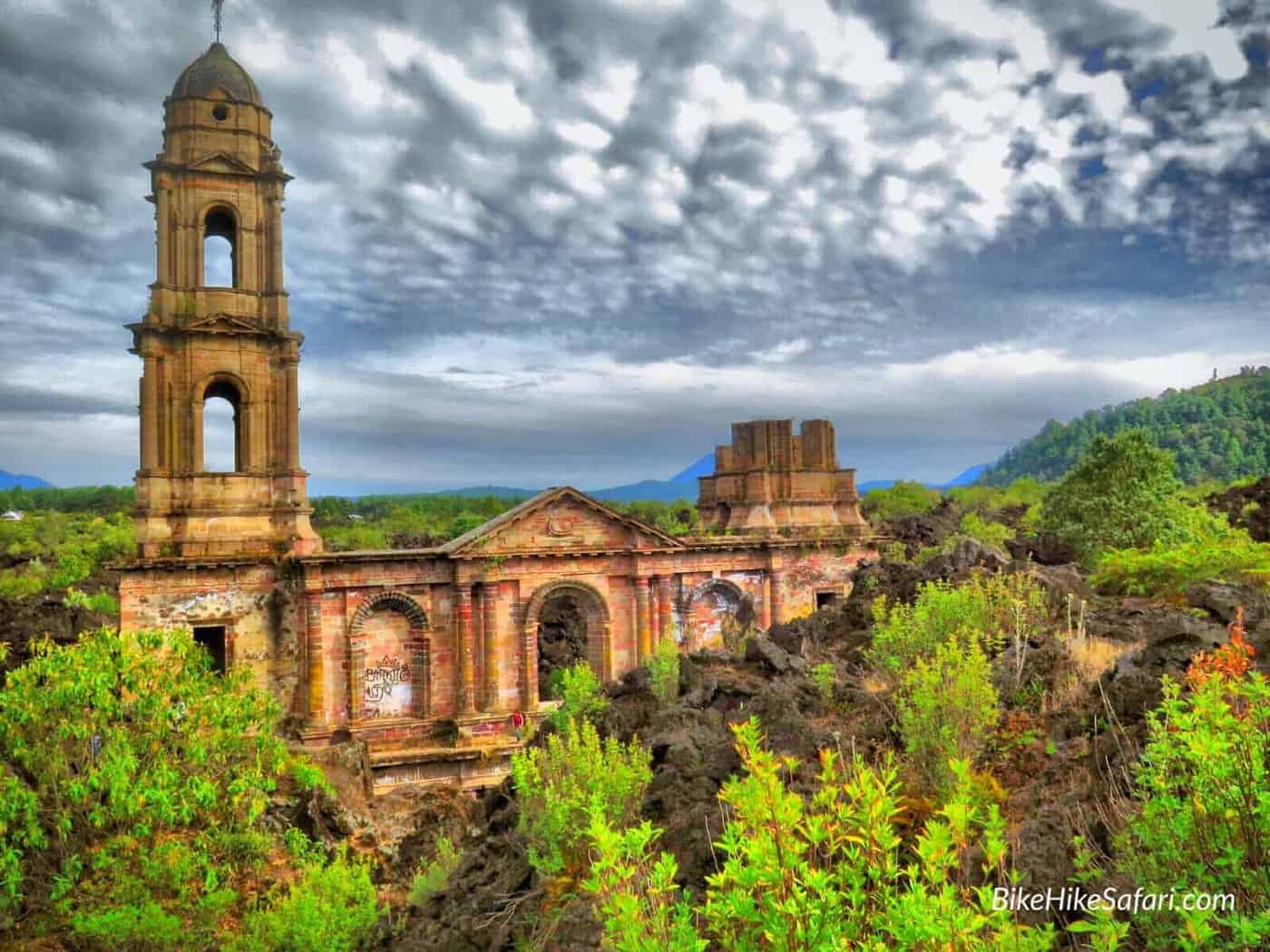 On 20th February, 1943, near the town of San Juan Parangaricutiro in the Mexican State of Michuacán, Dionisio Pulido and his family were preparing the field on his farm. Spring planting season was approaching. By 4pm the ground near him opened up. Ash and smoke bellowed from the crack.

A volcano was born called Parícutin. It rose to a height of 50 meters in the first 24 hours and between 100-150 meters by the end of the week. After 9 years the volcano grew 424 meters above the valley before it stopped erupting.

During its period of activity lava and ash buried several towns including the town of San Juan Parangaricutiro. People were evacuated and all houses were destroyed with the exception of one. San Juan Parangaricutiro Church miraculously survived the flows of lava that consumed the town. It now makes one of Mexico’s most unique places to visit.

It was late in the afternoon when I arrived at the nearby town of Angahuan. A dusty rural town trying to make its way in the tourist world. Loudspeakers blared from several unknown locations. They appeared to be a competition to see who could annoy me the most with some sort of unknown message.

I quickly checked into a very cheap family run hotel and walked several kilometers to the lava fields and church. It was late. The guides attempting to convince me that I needed their service were left disappointed.

The walk was easy enough. I enjoyed being back on my feet hiking again, even if it only was for a couple of kilometers. I hiked around the remains of the church, peering down into the depths. I’m not sure how tall the church was, I suggest it would have been the largest building in town at the time of it’s demise. As it was late in the afternoon there were few people there, which suited me just fine.

As the sun was getting low I returned to my accommodation which was across the road from the alcoholics anonymous meeting place. The store 20 meters away sold beer so I bought one and sat outside with several of the tour guides. Like many tour guides I know (I used to be one) they enjoy a beer and conversation at the end of the day. I was at 2400m and the cold temperatures sent me to my room before I had a chance to learn much from these characters.

A couple of days earlier I left a rain soaked tent in a family field on route to the town of Mazamitlan. Soaked to the bone from cycling through rain all day I stayed 2 nights in this Pueblo Mágico. A stunning church and plaza had me staring for hours as I ate local food from a nearby street stall. I like the street food in Mexico. It was a weekday and there were no tourists at all in town. The weekend, it is said, can be overwhelming as tourists descend on the town and crowd the restaurants and hotels to overflowing.

When I cycled out of town a red utility vehicle pulled up next to me. Martha started speaking to me in perfect English. She was born in the area but spent all her life in USA. She returned to start an organic farm. She offered me the opportunity to inspect her farm and join her for lunch. Chili Rellenos was my treat for lunch, cooked by her Aunty who is also her neighbour. She still has a lot of work to do as evidenced by several unfinished projects but I suspect that a year from now the place will be amazing. It’s not everyday I accept a ride from a total stranger to visit an unknown place. Such is the serendipity of my journey.

Upon leaving the organic farm I rolled into the town of Los Reyes. It was late in the evening and the sun had set. Riding after sunset is never ever my plan. It had been a big day on the bicycle. The first hotel I stopped at rented rooms by the hour, the strip club next door ensured I didn’t stay there. The next hotel had the grand illusion that it was the Hilton Hotel as judged by it’s ridiculously high price.

Finally, I saw a sign for a hotel on a side street. Several Police cars were parked out front. The entrance to the hotel was blocked by a military style bunker made from sandbags. I asked the Police guarding the building if it was open. I entered either the safest or most dangerous hotel in Mexico.

It turns out the hotel was housing several Police as they patrolled the nearby towns. The state of Michoacán is known to be among the most dangerous in Mexico. I spoke with several Police Officers from their elite unit for many hours. As I am an Ex-Police Officer we instantly had a common bond and many stories to share. I was told of the areas to avoid and areas that were safe in Mexico. Turns out there are only very small pockets of Mexico that the Police consider dangerous. I enjoyed my time with them.

The Mexican State of Michoacán has been amazing so far and not the dangerous place I had been warned about. Again, Mexico continues to surprise me with how amazing it is.

4 thoughts on “The Lost City of San Juan Parangaricutiro.”