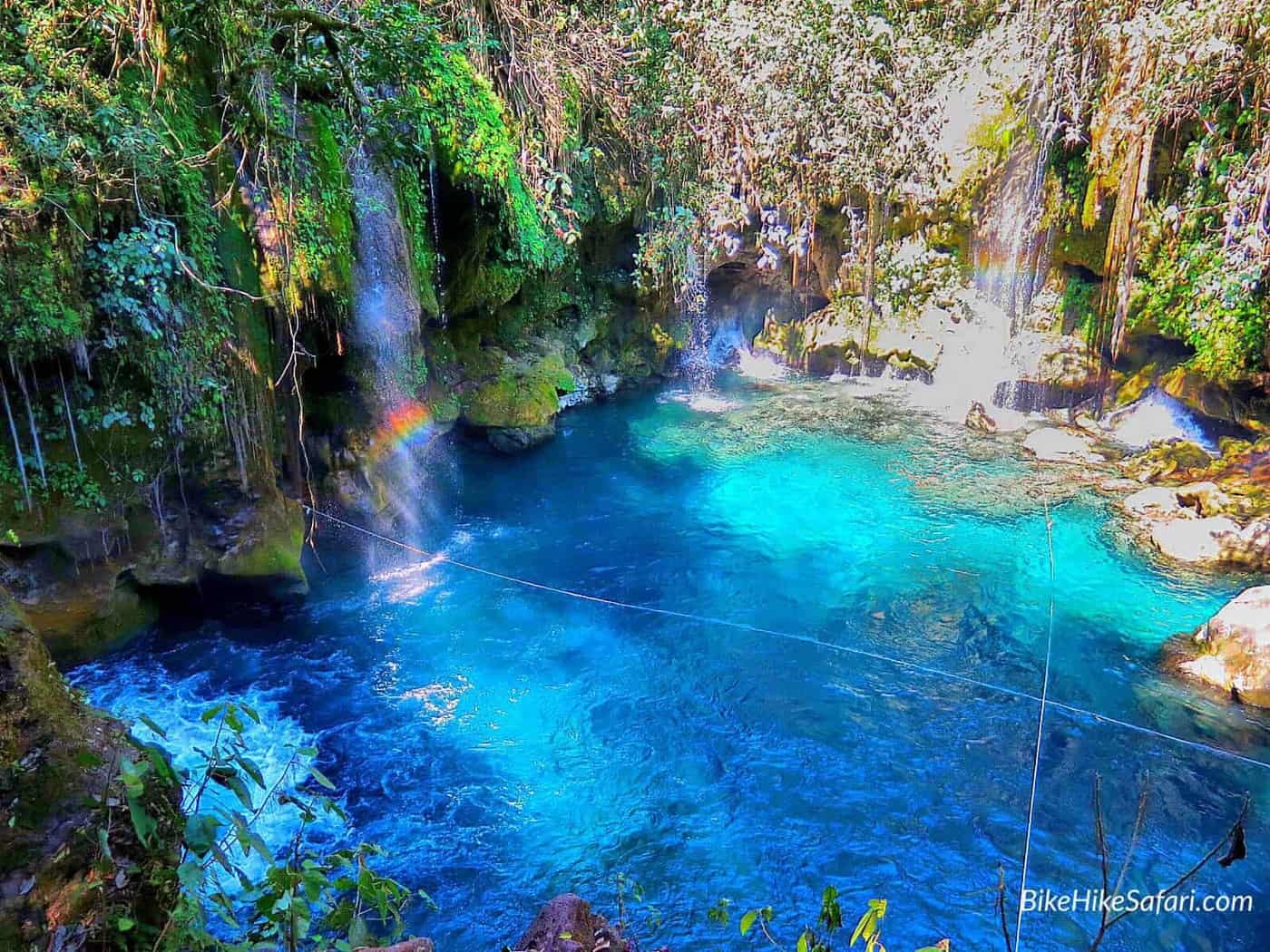 The waterfalls of the Huesteca are numerous. Places like Tamul falls, Puente de Dios, Tamasopo falls and more. I was faced with the hard decision of which waterfalls not to visit.

A look at the map revealed that I could visit several waterfalls and make a nice little loop that would take me back to the Sierra Gorda. There are just too many places to explore, sometimes I have to cut some places out of my itinerary or I may never leave Mexico.

I arrived at the entry gate to Tamul waterfalls at midday. They tried to charge me 600 pesos for a private trip. I already knew this would happen, I’d already been pre-warned. No thanks, I told the gatekeepers I’d wait for a group. I found a tree to rest against.

It seems to be a well known scam that the guides and locals try to extort as much money out of tourists as possible. I’d heard of other cyclists having this problem. It’s not that I’m against that cost if I wanted a private trip, but I knew that I could join in with others to form a larger group.

They wouldn’t let me into the area to find another group to join up with. I knew there were other individuals in the area that could form a larger group, I saw them enter. Having spent half my working life in the tourism industry I dislike this selfish side of it. I chose to wait.

I must of fallen asleep. I woke to the sounds, ‘señor, señor, there is a group waiting for you‘. Seems a group magically appeared and they had room for more people. I was told I was very lucky. I went downhill to the canoe. Emilio and his son were there, I’d met them at the Cave of the Swallows the previous day.

It was a cold day. The water was warm but I was wrapped up in jeans, a long sleeved shirt and down jacket. This is supposed to be the tropics. So I didn’t go for a swim. I spent the next 4 hours paddling up the blue river to the stunning Tamul Falls. Turns out there is also a free option to get to the falls. It involves hiking in from the top on another road. When I found out about this option it was too late.

It was late when I returned from the canoe trip. I camped next to the river with Emilio and his son. We cooked up a communal meal and I set about repairing a flat tyre. It rained during the night.

It set off to explore more waterfalls of the Huesteca at the town of Tamasopo. I made my home in a cheap hotel. It would be my base for a couple of days. I planned to get off the bike and take a couple of short hikes to the nearby waterfalls. I also knew that Gareth and Jean were somewhere in the area and I hoped to meet up with them again.

I set off quite late to a place called Puente de Dios. It was about a 3km walk on the outskirts of town. At the entrance there was nobody to collect my entrance fee, so I just walked right in. I spied a couple of touring bikes that I recognised as belonging to fellow adventure cyclists, Gareth and Jean.

I arrived at this bright blue waterhole. I sighted Gareth and let out a bit of a yell of excitement. He reciprocated the excitement. Jean was also there. For the next couple of hours we swam and photographed the area. We had the place to ourselves. We also compared notes on our journey in recent weeks. We’ve both had quite the adventure.

The following day Gareth and Jean set off. I made my way to Tamasopo Falls. I was alone. Not a tourist in sight. Again nobody wanted to collect my entry fee. Clouds and cool weather failed to excite me to enter the water. I took my photos, enjoyed the peace then returned to rest in my hotel. A few days later I was back in Jalpan, thus completing my Huesteca circuit. I have loved the waterfalls of the Huesteca.

I’ve had many requests in the last couple of years for maps and routes of my journey. I plot a lot of my travels into my phone via the Pocket Earth App. I also record every section of my journey on my Garmin Edge GPS.

A combination of lack of knowledge and laziness prevented me from sharing the routes. Well, I have changed all that. Over the coming weeks I’ll be updating all of my cycling on an easy to read Google Map.

Zoom in and zoom out as you like and even change the view to show different terrains, not just the satellite views. I’ve even plotted my campsites or hotels each night. A close look will reveal all my failed attempts at getting off the road looking for campsites! It is a work in progress, let me know what you all think.

8 thoughts on “Waterfalls of the Huesteca”