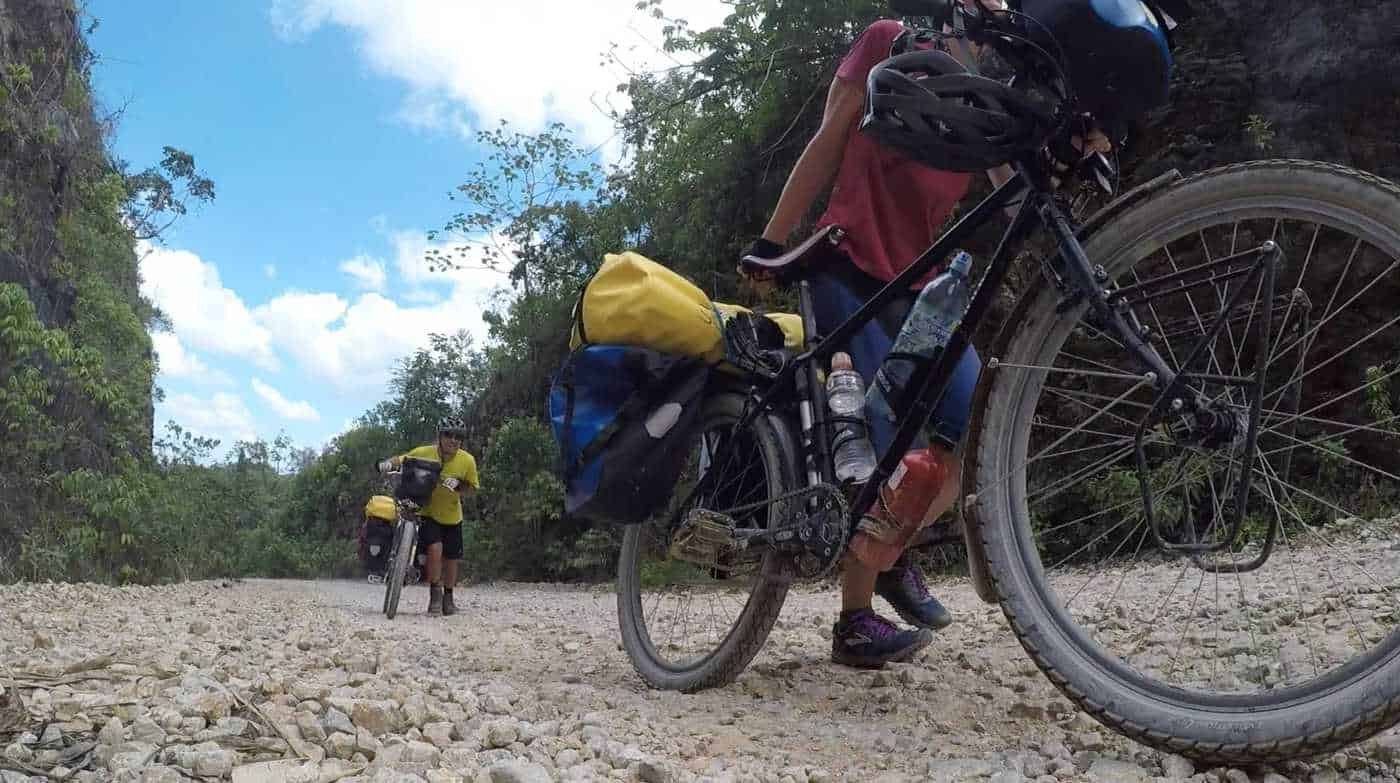 The thought of bicycle touring in the Guatemala highlands fills even the strongest touring cyclist with a combination or fear and excitement. This place has humbled the strongest of cyclists. The steep, remote and rough roads are no joke. National highway 6 is nothing more than a one lane dirt road with 1000m vertical climbs at ridiculously steep grades.

Leaving Belize and the steamy jungles of northern Guatemala it was time to seek the cooler weather of the Guatemalan highlands. Cattle ranching and the cowboy culture is alive and well in northern Guatemala. But it made way for remote Mayan villages, wildlife reserves and waterfalls.

Small Mayan villages are also super friendly. Late one evening after climbing, or should I say pushing our bicycles up 1000 vertical meters of rough dirt road, we asked to camp next to a family house on the local football field. We shared the site with leaf cutter ants and several curious children.

It was not long before one of the kids returned with what appeared to be her school homework. She was learning English and took the opportunity to have us either help her or do it for her. All the while her curious but shy parents were off in the distance looking on.

After dinner and after the sun had set we still had several teenaged boys hanging around our tent. Our life on the road revolves around going to bed at sunset and rising at sunrise. Several goodbyes did not seem to pass on the message that we were in the tent and about to read a book before going to sleep.

In other areas it is easy to be the centre of attention. It is not often a couple of gringos on bicycles pass through town. On one occasion, I stopped under a tree to consult the map I had on my phone. A curious man and his family came out of their house with a couple of bananas for us. There people had nothing but was generous with no thought of wanting anything in return. We learned that only one other cyclist had passed through this area, almost a year ago.

We had heard of an extortion gig that some locals had set up on highway 5 near the popular Semuc Champay. They block the road and demand money from people passing through. They fake doing road repairs, and ask to be compensated for their work. Often they use intimidation, machetes and more to get money. It could be called robbery.

We arrived at the first of these roadblocks in the early morning. They wanted $20 to let us past which is a lot of money in remote Guatemala. I refused. Then $10. Then $2. Being on a bicycle I am very vulnerable to being robbed. I carry no weapons to defend myself. But I have an advantage over other tourists. Bicycles are for poor people, so it is easy for me to convince people that I am poor.  Specially when they have a motorcycle and I tell them they are richer than me because I can’t afford one.

We got through the first roadblock without paying but we had heard that further up there was another roadblock and one of the guys there was a bit crazy. This roadblock was near some houses. As we passed I could not only hear the usual calls of ‘Gringo Gringo‘ but everyone started to move to the front of their houses to look at us. We approached the roadblock and stopped about 50 meters away. They were waiting for us. We approached the rope across the road. As expected they demanded money. From $20 down to $2. I firmly refused at every offer. If they wanted, they could have robbed us and taken everything. But they didn’t.

They were petty criminals and not very good at their jobs. Maybe they actually believed that I was poor. I argued strongly about my lack of wealth. Eventually they asked for my water bottle, an old Gatorade bottle I used to drink from as I cycle. I thought they wanted water which I offered them but insisted that I wanted the bottle back as I needed it. When I asked for the bottle back he looked at his friend. I could tell they were both surprised. It was a look that told me they believed I was poor. The reality is, I have no time for criminals or dishonesty. They were getting nothing from me today!

Semuc Champey is a small slice of paradise set in a remote valley far from anything. Recent years has seen a slew of eco resorts and cheap backpacker digs to satisfy the traveler who wants to feel like they are lost in the jungle. The crazy steep 1000 meter vertical descent was more like entering the lost world.

Rather than ride across more steep hills we caught local transport to Semuc Champey. For a modest entry fee we spent the majority of the day hiking and chillaxing in the pools. I can only imagine what this place must have been like 20 years ago. Before the crowds. Having said that, it wasn’t really that crowded.

After a couple of nights in a cheap bungalow it was hard to leave. Easy access to nice meals and friendly people often make it hard to leave. Although the thought of cycling up the impossible hill was in the back of my mind. It simply would be painful. The easy option was to contact a local bus company to drop us off at the top of the hill

The national bird of Guatemala is the Quetzal. It is also the name of the currency, The Quetzal! Nowadays it is rare to see these birds in the wild, however, several reserves have sprung up over the years to protect them. One such place is the Quetzal Biosphere Reserve.

Situated next to Highway 14 is a small cloud forest with camping, hiking trails and the chance to see the Quetzal. We set up camp next to a private stream for a few days to relax, hike and hopefully see a Quetzal.

Taking advice from the people in the reserve we went to the place where it is most common to see the rare birds. That place was in a tree right next to the busy highway, in the parking lot. After several attempts we got to see the bird that is sacred to the Mayan people. It’s bright green and red feathers  were worth the wait.

From the Biosphere reserve it was a series of long descents and ascents through the capital, Guatemala City. From there it was onwards to Antigua where we planned to chill out and climb a volcano or two.

Next : Acatenango Volcano without a Guide