Acatenango Volcano Guatemala without a Guide 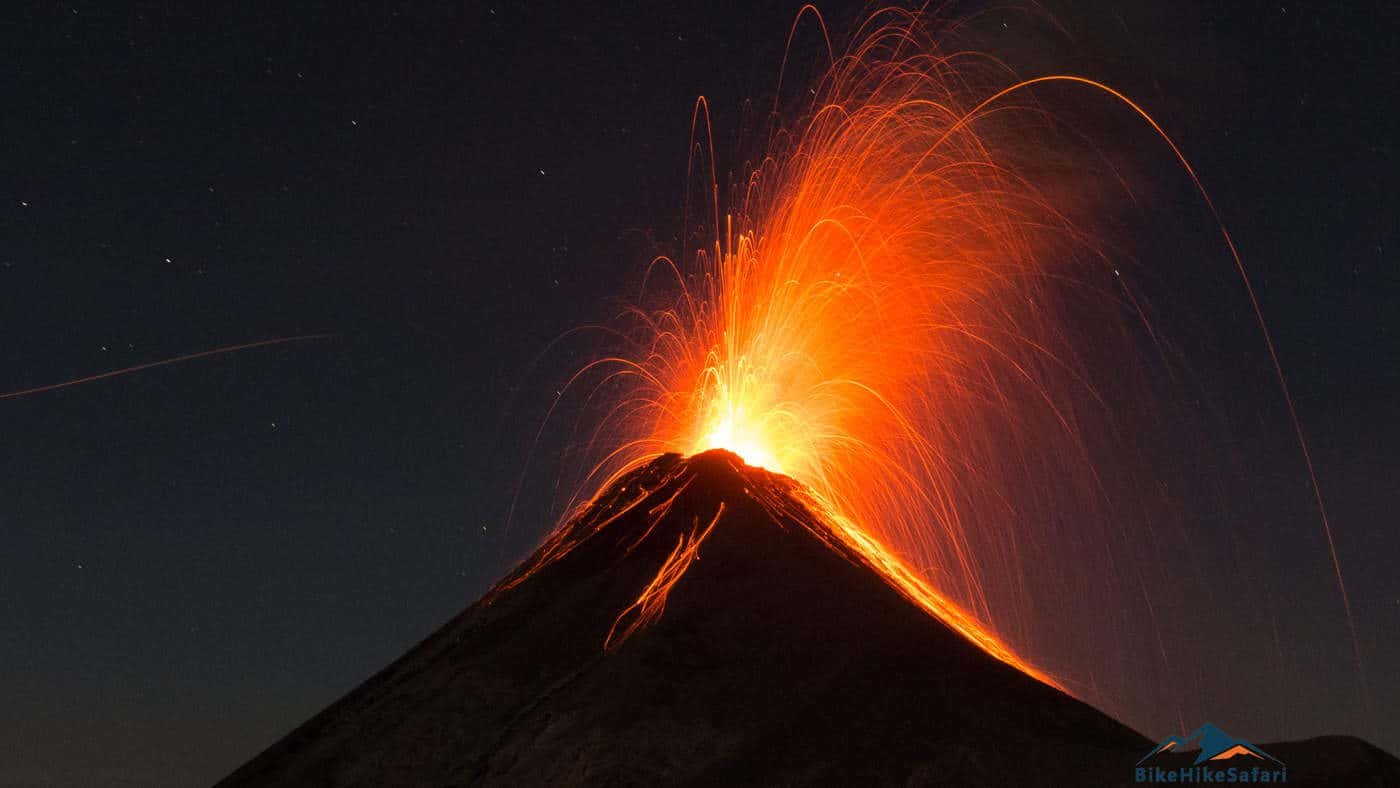 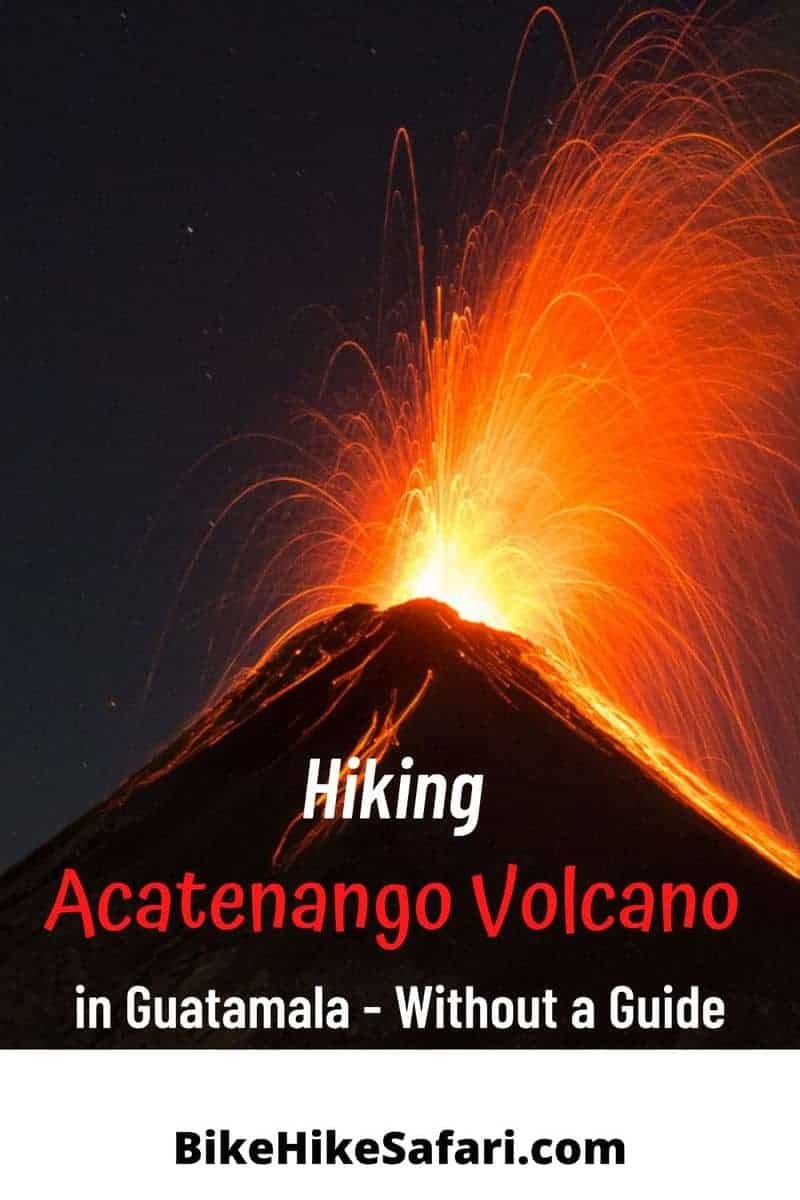 One of the most active volcanoes in the world is Fuego Volcano, just outside of Antigua, Guatemala. A popular way to experience the area is to climb and camp on the nearby Acatenango Volcano. Most people do the Acatenango Hike on one of the many an organised tours from Antigua. But there is another way. It is possible to Climb Acatenango Volcano Guatemala without a guide.

The Acatenango Volcano Trek is one of the best overnight hiking trips in Central America.

Acatenango Volcano in Guatemala was once very active, but not anymore. Despite a few steaming vents near the summit is currently not active. Only a couple of kilometers away is Fuego Volcano, one of the most active volcanoes in the world.

When I mention active, I mean, really active. This place erupts a couple of times per hours sending plumbs of volcanic ash and rock high up into the sky. When explodes, it sounds like a jet plane during take off.

The trail started climbing right from the road on soft volcanic soil. Two steps forward, one step back. Although it was not to steep the lose volcanic soil made for slower than normal travel. Also, the start of the hiking trail was at 2450 meters so the air was already a little thinner.

After about an hour or so we reached a small family owned restaurant by the side of the trail, however, we overpacked with food so kept going. We would return to this place on our descent to enjoy their reasonably priced meals.

After maybe another hour we reached the park entrance and paid the $7 entry fee. There was also a dude selling snacks, fruit and drinks. Once agin we were tempted but as we were carrying so much of our own food it didn’t make sense to buy anything.

There is a large network of hiking trails in this area. Despite having a plan on where we wanted to camp we had no idea just how many trails were in the area. Luckily, we a met a guide from one of the highly recommended companies, GT Adventures. He filled me with lots of very useful information.

The Green and Red Trail

There are two main trails on Acatenango Volcano. The green trail and the red trail. The green trail is longer, less steep and goes to the best campground. The one that overlooks Fuego volcano. Any hiker going to this trail should take this trail for reasons I will reveal later.

The other trail, the red trail is steeper but more direct. All the campsites on this trail are very nice but have no views of Fuego Volcano. So, if you are planning on hiking Acatenango, be sure to take the Green trail.

In Fact, if you are not hiking independently, be sure that your tour company hikes and camps on the Green Trail. If they do not, then choose another company. The photos below will be enough to convince you.

Back to the hiking. We had a quick snack at the park entry station and we set off for our campsite following the green trail. It is marked with occasional splashes of green paint on the trees at trail intersections. Again, if you plan to hike this trail. Follow the Green Trail!!

The trail continued ever upwards. The soft volcanic soil of of the lower elevations gave way to a mostly hard packed trail. On the Green trail we made good time. It took around 5-6 hours of hiking from the start of the trail to make it to the campsite. Low cloud and cold weather greeted us as we set up our tent.

On the side of Acatenango there were a series of flat sections big enough to pitch a tent. These have been carved out of the side of the volcano and there is enough space for hundreds of tents. Our friendly guide said it was no problem to camp there. In fact, he offered us water, which we refused because we packed so much of it.

This flat campground was only a couple of kilometers from the explosive Fuego volcano. The view from the tent when the clouds cleared was nothing short of spectacular. I will let the photos a little further below do all the talking.

There are several places to camp on Acatenango Volcano Guatemala. But really, the only choice is on the south side of the volcano facing Fuego Volcano. The campsite is about 3 kilometers from Fuego which erupts a couple of times per hour why would you consider camping anywhere else. This campsite is at 3550m and is very cold.

There are other official campsite on the Red route but there are no views from these camps. Take my advice, camp on the sites on the south face. And if you choose to take a tour be very certain that they camp here. I’d be pissed off if they didn’t! Remember, take the green route!

From the front door of our tent the weather cleared as the darkness approached. The temperature was now below freezing at 3550 meters. A couple of times per hour Fuego volcano exploded in a shower or red molten rocks. Natures version of a fireworks display. Seconds after the explosion came the sound. Kinda like a jet plane at take off.

For several hours we sat and watched nature display to us that we are not in complete control of the environment. It was not only an awesome display but something will not quickly forget. In all my life and in all my travels this is one of the most powerful displays of nature I have ever witnessed. I felt very small. Just a small dot on this world that could be wiped out if nature so chose.

The climb to the summit of Acatenango Volcano Guatemala

All the guided tours wake up at silly o’clock to reach the summit of Acatenango Volcano for sunrise. The result is summit crowded with people trying to take selfies when Fuego erupts. We chose to enjoy sunrise from our campsite. We would head up to the summit later in the morning.  At 3976m it was still a little bit of a climb.

This later start made for warmer weather. The pace was very slow. A combination of high altitude and very soft volcanic soil. Again, it was very much two steps forward and one step back.

The wind at the summit was relentless but manageable. It wasn’t long before the clouds started to roll in. Anyone heading up there after midday would be heading into the white soup of clouds. I pity their lack of views.

We took enough time at the summit to chill out and take in the views before slipping and sliding our way back down. The route we chose to take us back to the road was via the Red route. I can attest that it is steeper but shorter and a good alternative for the descent.

Getting to the start of Acatenango Volcano

We set of from Antigua on a local bus to the town of Parramos. Any bus heading to the town of Chimaltenango will drop you off there. We walked across the plaza then take another bus to the start the trail near La Solidad. Any gringos in this part of the world are going to climb Acatenango volcano so the drivers will know exactly where to take you.

Camping and permits for Acantenango

There are a couple of campsite on Acantenango. Make sure you follow the green trail and camp with a view of Fuego. The campsites on the red trail do not have a view. This is really important. In fact, if you are taking a guided tour ask which trail they take and where they camp, only a couple of guided companies take the green trail. Companies like Ox and GT. I met and spoke with their guides so if you are not confident to go alone use one of these tour companies. They seemed very professional.

Permit cost are 50Q (around $7)  and can be purchased at the entry booth about 1 hour walk from the road on the hike.

There is a restaurant about an hour from the road with reasonably prices meals. We stopped there for lunch on the descent. We carried all our water for the 2 days, however, we could have bought water at the restaurant and we could have got some water at the campsite from the guided companies. But best not rely on this and be self sufficient. There are no water natural sources on the hike.

We used an offline maps from Pocket earth Pro App, my go to hiking, bicycle touring and travel map. It showed the campsites and most but not all of the trails. Maps.me or Gaia would also work well offline.

The campsite is at 3550m and the summit of Acatenango is at 3976m. I suffered from minor altitude sickness at camp. Just enough to feel minor tingling in my fingers and lethargy. Luckily it did not stop me from enjoying and climbing the volcano.

It is damn cold. The campsite was at 3550 m and the temps were around freezing overnight. After an extended period in the tropics this cold weather was quite the shock. So make sure you take enough clothing to stay warm and make sure you have gear to protect from rain and strong wind.

In 2017 cold weather gripped the volcano and several people died. This is not a place to be taken lightly.

Would you like to climb Acatenango Volcano Guatemala? Need me to answer a question? Let me know in the comments below.

11 thoughts on “Acatenango Volcano Guatemala without a Guide”