Cycling across the Sonoran Desert 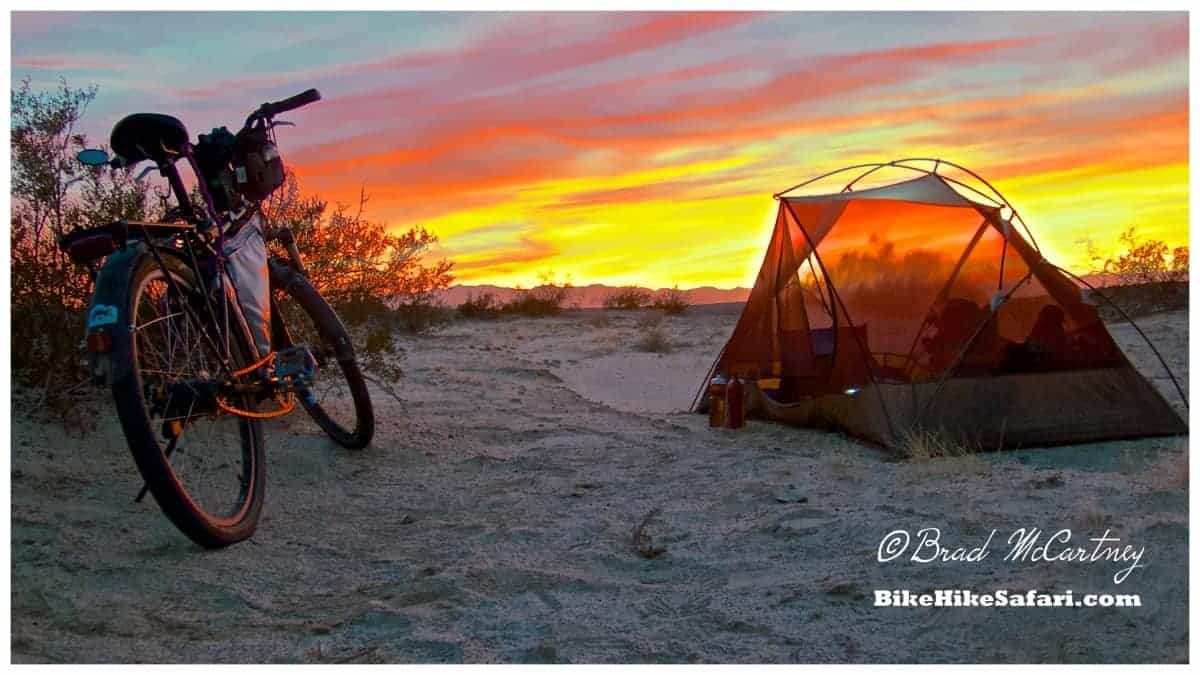 Despite the threat of rain in Arizona, the driest state in USA, I set off cycling into the Sonoran Desert. Large Saguaro Cactus were for the most part my only companions. Listening to music as I cycled a song came on that seemed somewhat fitting.

I replayed it many times over the journey. ‘Horse with no name’ by America. As I took my steel horse across the desert and after nine days the desert had turned to sea. I arrived in San Diego.

Normally I try to avoid the busy interstate highways and freeways but for some parts of Arizona I had little choice. The shoulders on the interstate highway afforded me ample room away from the trucks, RVs and cars but it presented another problem. My worn out tyres kept running over broken glass and worse the thin bits of steel that were once part of a truck tyre before it exploded and dumped its cycle unfriendly steel belts onto the shoulder of the road.

As my tyres are getting thinner the amount of flats seem to proportionally increase. My front tyre has served me through 3 tours and almost 20000km to date, the rear was added in Alaska and completed about 8000km.

I arrived late in the afternoon at a gas station at the small town of Gila Bend, in the middle of the desert. I’d had 2 flats that day. Each time I removed small pieces of wire from the tyre. Like all gas stations in the desert they have rest rooms, sell junk food and lots and lots of beer which can take up more room in the fridges than carbonated sugary drinks.

This gas station had a laundry which I used and with ‘no shame’. I set up my tent behind the gas station next to the gate that said, ‘RV Campground’. The word Campground takes on a different meaning in USA. Usually its not a campground for camping but a parking area for large Greyhound Bus style RVs. I would deal with the flat tyre in the morning I thought.

Despite being a 24hour gas station I slept very well even if there was a constant stream of truck drivers that would have been coming and going all night, although I wouldn’t have known it. I set about fixing my 2 tubes and discovered another flat tyre. Frustrated. I had only 3 patches left and the first tube I set about repairing had 3 holes in it.

I went to the Gas Station to inquire about any patches. None. But they did have ‘Slime’. A green goo that attracts itself to the hole in the tube and sets to produce a repair. I bought some and put it into the flat front tyre and slowly leaking rear tyre. I repairing the 2 other tubes with conventional patches in the hope that I wouldn’t need them. I hope this ‘Slime’ stuff works I thought.

I decamped from the Gas Station late and put in some kilometers before I found a farmers field to hide in and set up camp. I very close to the Mexican border. There were lots of footprints in the field which made me think it could be from one of million people per year that jump the fence to enter USA. I had seen countless Border Patrol vehicles in the last day or so. So many in fact that I think the vehicle manufacturer Chevrolet is doing very well.

It was dark and I was too tired to care or move anywhere else. Despite being in a field with no sign of a house or people I put a stealthy, so I thought, cable round the bike and strapped it to the tent in case anybody stumbled into me during the night thinking the bike would be better than walking. My bike was still there in the morning.

I left Arizona and arrived into California on a warm day that had me in shorts and a singlet. It was great to be hot and sweaty again. Unfortunately the interstate freeway had a sign prohibiting bicycles. That caught me by surprise. I thought for a minute what I should do. The detour would add an extra 130km to my journey with no chance of resupply.

I considered my meager supplies of food and water and set off the the freeway. It must have been ok because I was passed by several California Highway Patrol. I stopped at a rest stop with a Police patrol car there. I thought I would wander over to say hello. In the process of cycling over he put on the lights and he was off.

Turns out its a great place to wait for somebody to drive past not wearing a seatbelt. Easy work. Sit at the side of the road with binoculars looking at oncoming traffic. He returned many times and was never there longer than 2 minutes. Wear your seatbelt me thinks.

Further into the desert I camped within sight of the Mexican border. I stealth camped off the road several hundred meters out of sight. During the night I was not only kept company by the Coyotes but people. The desert was full of them. Cars on the side of the road stopping with doors opening and closing at all hours of the night. It could have been the Border Patrol but I’m not sure they use Spanish as their first language like everybody else in this part of the world. The desert seemed to be very active at night.

My penultimate day was spent leaving the low desert and heading to the hills surrounding the small town of Campo. The town that is the start of the PCT, Pacific Crest Trail, that runs all the way to Canada. 4286km in length. I just had to pass by the start of the trail as I was in the area. Departing Campo I made tracks for San Diego.

I decided to try and cycle the whole way without either a rest break or food stop and I did so quite easily. So now I sit bathed in the warmth of San Diego that reminds of my hometown of Darwin in winter.

In recent days and months I’ve tempered my distances or I would run the risk of having to choose between taking a more indirect route or hitting the coast with lots of time to spare as I need to leave the country in early January. Amazing that 100km a day in only 4-5 hours seems easy. Many months ago that was not the case.

Since leaving San Francisco 2 months ago I’ve only seen 3 groups of cyclists. Its been a rather long and lonely stretch. I’m ready to be social at the moment, so many days and nights alone with only my music and audiobooks for company, hopefully San Diego and LA can remedy that.

4 thoughts on “Cycling across the Sonoran Desert”