Cycling from Meteorite Craters to the Apache Trail 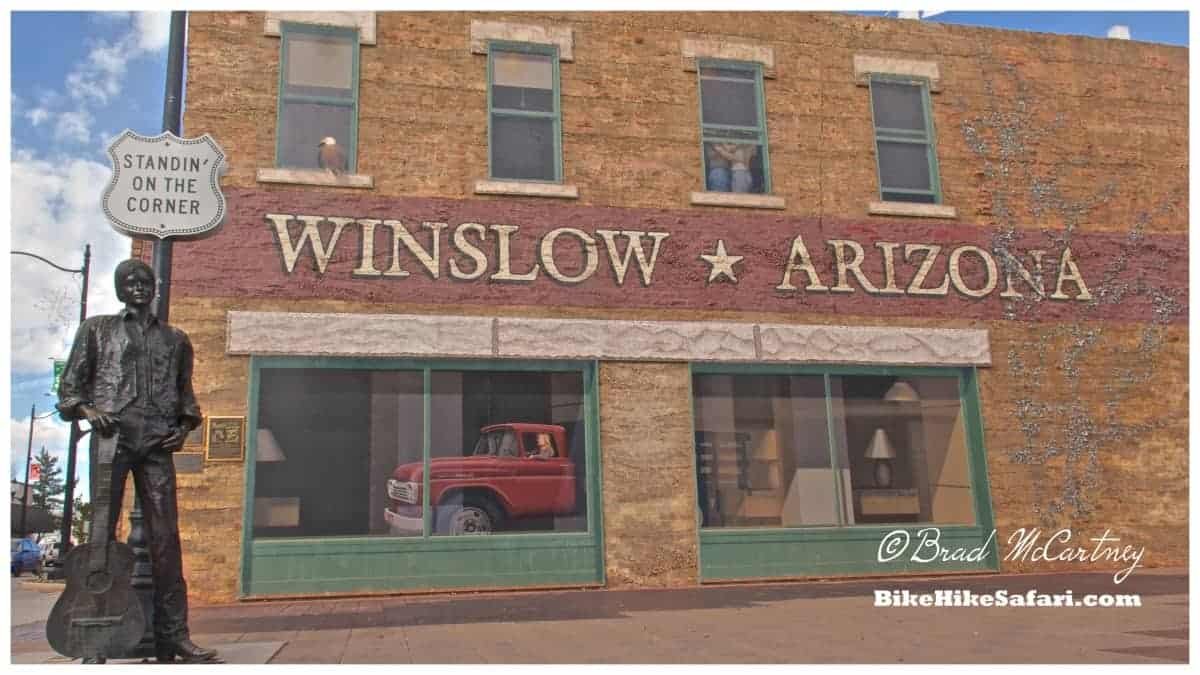 I found myself standing on a corner in Winslow, Arizona on part of Route 66 which like most things historic in USA is quickly discarded in favour of the newer, bigger and better. In this case, freeways, chain restaurants and strip malls. Winslow has seen better days with its main claim to fame being it featured in the song ‘Take it easy’ by The Eagles. The last few days saw me gazing into meteorite craters, eating in classic Route 66 diners and cycling the Apache Trail.

I took a couple of days off the bike in Winslow to rest, read, watch some movies and eat. I think I was the only tourist in town which suited me just fine. As it turned out it was a prudent choice. Another winter storm hit the area dumping snow in the mountains just outside of Winslow. Also, I was planning on taking some backroads which would have become impassable in the snow and rain. A cheap hotel with movie channels became my home for a couple of days.

Before arriving in Winslow I made the very small detour to the Arizona Meteorite Crater. Around 50000 years ago a meteoroid about 50 meters across and traveling at about 42000km/h crashed into Arizona causing a crater over 200 meters deep and 1200 meters wide.

I was at the Arizona Meteorite Crater between Flagstaff and Winslow. I paid the $18 dollars entry fee which allowed me access to a gift shop full of trinkets, a documentary video on the crater and the opportunity to see the crater. As this impact occurred only 50000 years ago erosion hasn’t had a chance to do its job. I lingered at the crater, visited the gift shop and read books in the gift shop until it was near closing time.

My departure from Winslow was under cold but blue skies. I hoped to cycle over the mountains that separated me from the cold high desert to the warm low desert. It would be a mainly uphill day and I would need to cycle about 130km. I wasn’t sure if I would make it and the later than normal start in the morning didn’t help. It was a slow uphill all day. In the distance maybe 80km away I could see the snow covered peaks of the extinct San Francisco peaks volcano.

By lunch time the snow from the last couple of days storms still lay on the ground. I new it would come at some point as almost every car I spotted coming towards me was covered in unmelted snow. At the top of the Mogollan Rim I could go no further. It was now dark and I opened a side gate on one of the small forestry roads and hasty set up my tent. My thermometer told me -3 degrees Celsius. Surrounded by snow I spent the night and slept surprisingly well.

The following morning when I set off back down the frozen dirt road that joined onto the highway I wondered how far it would be before I would start to descend into the valley. Turns out the descent started within about 500 meters of my camp. I camped at the highest point of the road.

Within a short time I descended to the town of Payson then downwards into increasingly warmer weather, oh how I needed it. As usual campgrounds are closed when I arrive so I stealth camped on a side road surrounded by the largest of all cactus, the Saguaro Cactus and for the first time in a long time, calls of birds. I really can’t remember how long it’s been since I’ve heard birds around sunset.

I had purposely gone out of my way to cycle ‘The Apache Trail’.An old historic old stagecoach road that travels through the traditional lands of the Apache peoples and provides unrivalled scenery. I was not disappointed.

There were some steep climbs and descents on the unpaved sections of roads which were made slower by a combination of the light overnight rain and freshly graded roads that hadn’t had time to compact and harden the ground. From the high point of Tonto Pass I descended to the town of Tortilla Flat.

The 10km descent took me less than 5 minutes longer than the cars as I kept up with them for the majority. The bar in town was as touristy as they come, dressed up to look old wild west, complete with horse saddles at the bar.

I ordered a ‘Chimichanga’ for no other reason that I liked the name. It just rolled off the tongue. Turned out to be a deep fried borrito and in combination with a couple of Pale Ales it went down very well. A short distance after Tortilla Flats I hit civilisation. From here its highways for the most part as I make my way west.

Next : Cycling across the Sonoran Desert

2 thoughts on “Cycling from Meteorite Craters to the Apache Trail”