Cycling From San Miguel to Xichu 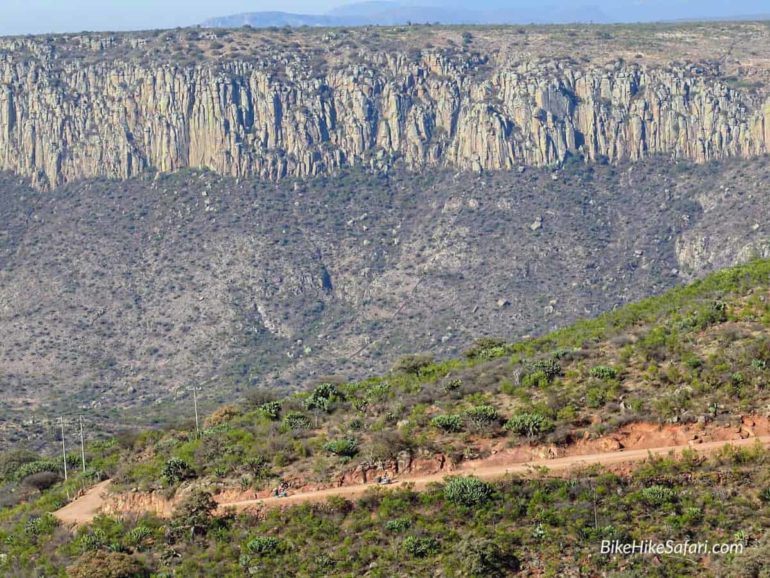 Xichu, a remote pueblo in the heart of the Sierra Gorda is the destination. Cycling from San Miguel to Xichu I was joined by Gareth and Jean from ElPedalero. We all have a similar route we want to take through the Sierra Gorda and Huesteca regions of Mexico.

For many weeks we have been dreaming and planning this ride. It promises to be extreme. High mountains, deep canyons, steep rough roads and few people. It’s exactly what we are looking for.

It was afternoon when we left San Miguel. A steep cobble stone road took us out of town. Once we were on the plateau it was mostly flat riding. A lack of shoulder and lots of traffic made for uncomfortable riding.

About 20km from San Miguel we stopped at the pueblo of Los Rodríguez for a late lunch / early dinner. We found one of my favourite cheap and easy street foods, Carnitas. A serving of meat that can be wrapped in tortillas or bread (tortas).

Late afternoon and we pulled off the main road into a farmers field and slept in relative comfort. It was great to be out camping again after so many nights sleeping in a real bed. I sleep better in the outdoors when the stars are my blankets.

We set off towards the mountain town of Xichu. Some large mountains stood in our way. Gareth was not feeling the best and we slept in a farmers field part way up a long mountain road near the village of Higueras.

The family that lived nearby allowed us to stay on some flat ground near the road. We all devoured dinner. Just as we were finished and the light of day was disappearing we were invited to join the family for dinner. That was such a sweet offer but we were full and had to decline. It was a shame. I would have loved to dine with the locals. Mexicans are a friendly bunch of people.

There was only about 1km of sealed road the next morning. So began the start of many days of dirt roads. I do prefer to be off the beaten track. Sometimes the journey is the destination and the destination is the whole region of the Sierra Gorda.

I struggled up the sometimes steep road for many hours until I reached the top. I stopped for lunch and waited for Gareth and Jean. For the first time in many months I enjoyed the heat of the day. It was much warmer here than I’ve experienced in many months.

The descent was long. Sometimes steep, sometimes rough but always scenic. It was mid afternoon when we arrived the the pueblo of Xichu. The pronunciation of the town very like the sound of a sneeze. I called it Arrrrchooo. I devoured 5 tacos and a beer in Xichu before we retired to the cheapest hotel in town.

Two hours later I returned to the same street taco stand and filled up on another 4 tacos. Not much happens here. It seems people just hang around the main plaza to people watch and chat. I stayed for the people watching.

We are now in the remote and wild Sierra Gorda, an area with the highest biodiversity in all of North America. The roads ahead promise to be difficult. Tomorrow we head off into the unknown. I have no idea where the next town is nor where I will find water or food. This is my version of adventure cycling, stay tuned.

Next : Cycling the Sierra Gorda from Xichu to Pinal