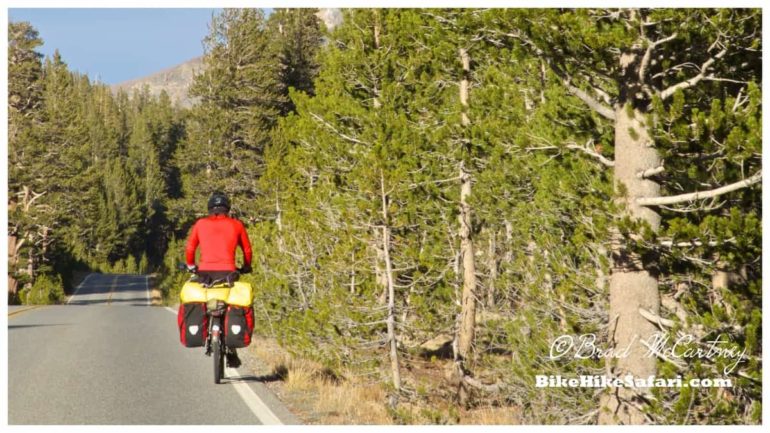 Cycling Tioga Pass California. A great 9943ft / 3031m climb from Yosemite Valley to Tioga Pass and to Lee Vinning. At 9943 feet / 3031 meters in elevation it is difficult cycling Tioga Pass. It was my route to take me out of Yosemite National Park and into the Eastern Sierras and desert beyond. I had only one problem, the first large Winter Storm was predicted to hit and close the pass, so I had to hustle and make it out of Yosemite and over the pass quicker than I would have liked.

It was a pre dawn start from the Climbers camp in the Yosemite Valley and before long I started on the 118km long climb to the pass and to the town of Lee Vining. I was under no illusion that it would be a hard day but I figured I’d give it a crack to get over the pass in one long day. The day before the climb I felt a bit average but just kept eating as much as I could to fill the tank and luckily I was fine by the morning.

By 10am I was at the junction of the Tioga Pass road and stopped for a coffee at the gas station. I spoke with a park ranger who advised that they would be closing the pass the next day due to the first winter storm of the year. It was expected to dump about 30cm of snow and have winds up to 80km/h. That increased my resolve to continue with the climb which continued steadily upwards to about 2500m at which point it went up and down in places for the next 20km.

The granite mountains came in every shape size. Some were pointed spires, some rounded domes and some were carved by long gone glaciers, some of the rocks were polished so smooth from glaciation that they were as smooth as a kitchen granite bench top. By 3pm I reached Tuolumne Meadows. My last chance to fill with water from the river and make it to the pass or hide out in one of the closed campgrounds and make the pass early the following day. I chose to go for it.

I saw something that excited me, it was only a signpost. It was the Pacific Crest Trail. I want to walk it one day soon, I feel ready. The pass was only about 10km from the meadows but it was all uphill. To my surprise I met Lucile and Loic again. Awesome to see them again. I was close to the summit of the pass. We organised to meet at the top.

As I got closer I was still surprisingly full of energy and somewhat emotional at cycling Tioga Pass in one day. My GPS told me it was 99km and 2541m of elevation gain in one day, I’ve never climbed that much in one day and was buzzing as a result. Lucile was at the top to take photos and we made a plan to meet at the bottom of the hill at the famous Mobile Gas station for dinner. I had this place recommended to me by Miles and Megan in San Francisco as the place to eat with huge portions of quality food.

The descent from the 3031m Tioga Pass was over in no time. It was a steep descent. The scenery changed to a more desert like, dominated by small shrubs and multi coloured rocks with deep canyons. Not the place to run off the road.

I met 3 touring cyclists on their way up at one of the steepest parts of their climb. We didn’t chat long and I continued downhill. I was being propelled downhill very past and as it was now quite cold I was rugged up in all my winter clothing including down jackets and gloves. The cold was made worse by my speed which at one point hit 90km/h. That’s the fastest I’ve ever traveled on a bike and a testament to the tailwind and steepness of the hill.

18km later I was at the Mobile Gas station and ordering a beer while watching the sunset over nearby Mono Lake. My upcoming problem was where to hide out for the upcoming winter storm!

Next : Snow in the High Desert