Snow in the High Desert 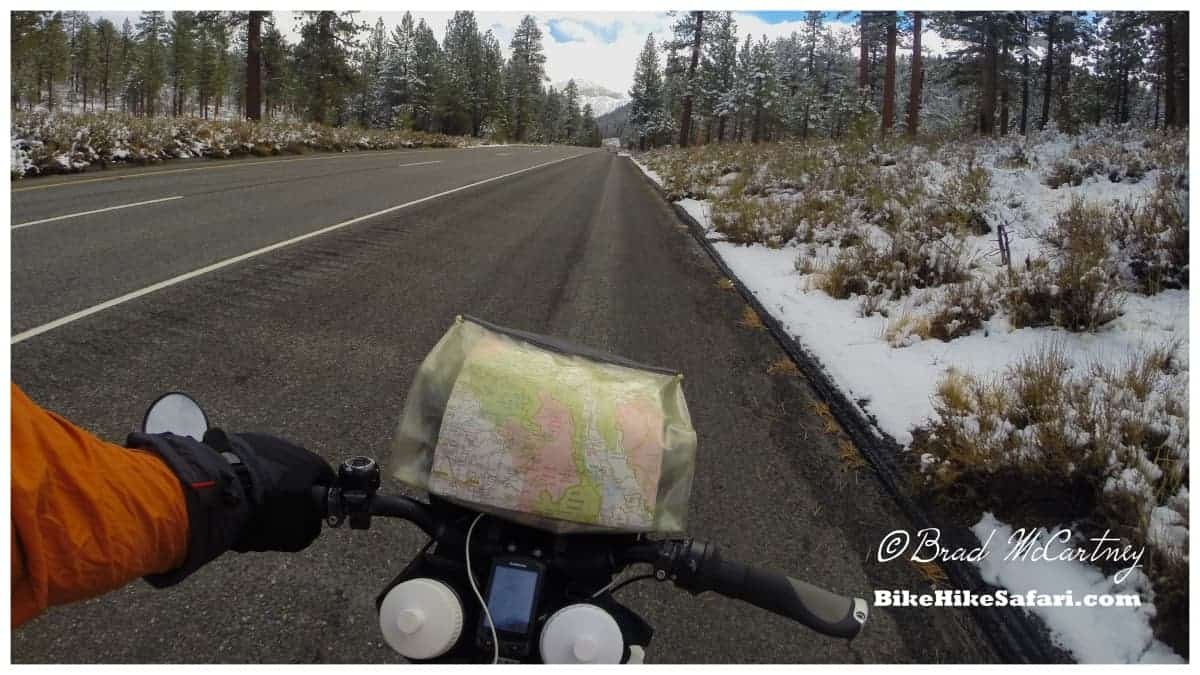 Snow in the desert, temperatures well below freezing. That was the weather forecast. It just doesn’t seem right. Deserts are supposed to be hot right? Wrong! The high deserts of western United States are a bit different from my expectations.

I woke to clear skies and set about finding WiFi in the nearby town Lee Vining. I wanted to inform myself as best I could on the approaching Winter Storm. Locals and travelers alike showed concern for me being on a bike and exposed to the weather. I considered a cheap hotel in town but was satisfied I could find shelter enough to ride it out, how bad could it be, right!

I had several hours before the arrival of the storm so I made my way down a corrugated dirt road to nearby Mono Lake for a short walk around a place described by Mark Twain as ‘ the Dead Sea of California’. A lake more than twice the saltiness of the ocean and very alkaline. While there are no fish in the lake there are lots of migrating birds that head to the area. I didn’t see one bird. It is said that birds in particular have a great sense of the arrival of impending bad weather or other acts of nature. Maybe that’s why I didn’t see any! They knew what was coming!

It was midday and the storm was said to hit the area around sunset so I made my way to some nearby campsites to find shelter. The nearby campsites were not so nearby when I cycling into a vicious 50km/h headwind while traveling uphill at around 2600m above sea level. Travel was slow. I considered myself lucky when I could reach a top speed of 8km/h!

I calculated the distance to the campsites and the speed I was traveling at and I concluded that I would be setting up as the storm would hit. The was nowhere else to hide as the roads I was traveling on were fringed with small desert shrubs that would not be sufficient to protect the tent from the winds. I just had to make it to the foothills to find some tree cover.

An hour before sunset the temperature dropped dramatically, from about 15 degrees Celsius to just above freezing. My body was struggling as I made it to a campsite that was closed for the season. I wheeled my bike under the closed barriers and found a convenient wooden structure that would shelter me from the wind.

The nearby High Sierra mountains looked angry. Dark clouds hung over the now covered peaks. I struggled to put up the tent and cook food in the strong wind. I was ravenously hungry as I usually am when its cold and I’m either hiking or cycling. I ate about the same amount of food that would be served to four people and crawled into the tent.

The wind battered the tent making it hard to sleep so I sat up and read my long neglected ebook. At 10pm it started to snow. Not too heavy just light wind blown snow. I was so tired I slept till I was woken by the first light of the day.

In the morning I woke to find it was 25 Fahrenheit inside the tent which was somewhat warm in comparison to outside, or maybe  it was just the wind that made it seem colder. The tent was covered with a hard crust of frozen snow which made opening the frozen zip a chore.

There was only a couple of centimetres of snow in the area but the nearby mountains when they were visible looked to have been covered with much more. I can count on two fingers the amount of times I’ve camped in snowstorms, both while on this current trip!

The wind was slowing down by now in comparison to last night but light  snow continued to fall for most of the morning. I consumed many cups of coffee and waited for the weather to turn which started to happen around 11am.

The sun came out, the wind stopped and I thought it had passed enough for me to keep going. I had no sooner packed up the tent and jumped on the bike to cycle away and it started to snow again. I continued for about 15 minutes till I arrived at a roadside cafe. As soon as I walked inside the snow stopped. 40 minutes later after I ate lunch I decided it was time to start cycling again.

As soon as I started to cycle it snowed again. Enough of this trying to wait out the snow I just set off. At first I was quite warm but slowly I needed to add layers until I had no more layers to put on. I was cold. I was heading south. The further I went the more snow I was seeing.

Near Mammoth Lake which has a nearby ski field the snow was covering more and more of the surrounds. I had planned to head into the Lake to stay for the night but as I looked further down the valley I could see the snow seemed to disappear. As if Mammoth Lakes was the furthest extent of the snow.

A strong tailwind propelled me to a campsite near the town of Bishop. While struggling up a steep dirt hill to the campsite I was met by the caretaker, Chris, a keen cyclist. He invited me to stay at his site for the night.

He had a touring bike and a Surly Pugsley fatbike so I joined him. He made a trip into nearby Bishop for beers. We chatted for several hours until another brief shower passed through the camp. I think I drank a little too much that night!

The high desert of this area is surrounded by 3000 – 4000 meter mountains. There are lava fields and what looks like small volcanic vents in the area that I can only think are long since extinct. There are also many hot springs in the area. I only visited one of them for a warming bath to soak my weary bones.

Earthquakes also seem to ravage this part of the world as evidenced by memorials to past victims. By late afternoon I pulled off the road to try and find some shelter for the night. The 40km/h tailwinds I had during the day had me further down the road than I thought. I found myself camped near the base of California’s highest mountain, Mt Whitney, at 4421m. Could I climb it this late in the year, specially after such a dump of snow.

I visited the Information / Permit Centre at Lone Pine where I met several people who just returned after attempting to climb the mountain yesterday. They spoke of lots of snow and the difficulty of breaking trail through the snow while climbing some steep switchbacks. They only made it part way up and turned around, others they met had done the same. It looked unlikely to get up without time and specialised gear. As a result I rather reluctantly chose to give it a miss. I shall return.

June Lake to near Bishop = 82km

Bishop to near Lone Pine = 97km