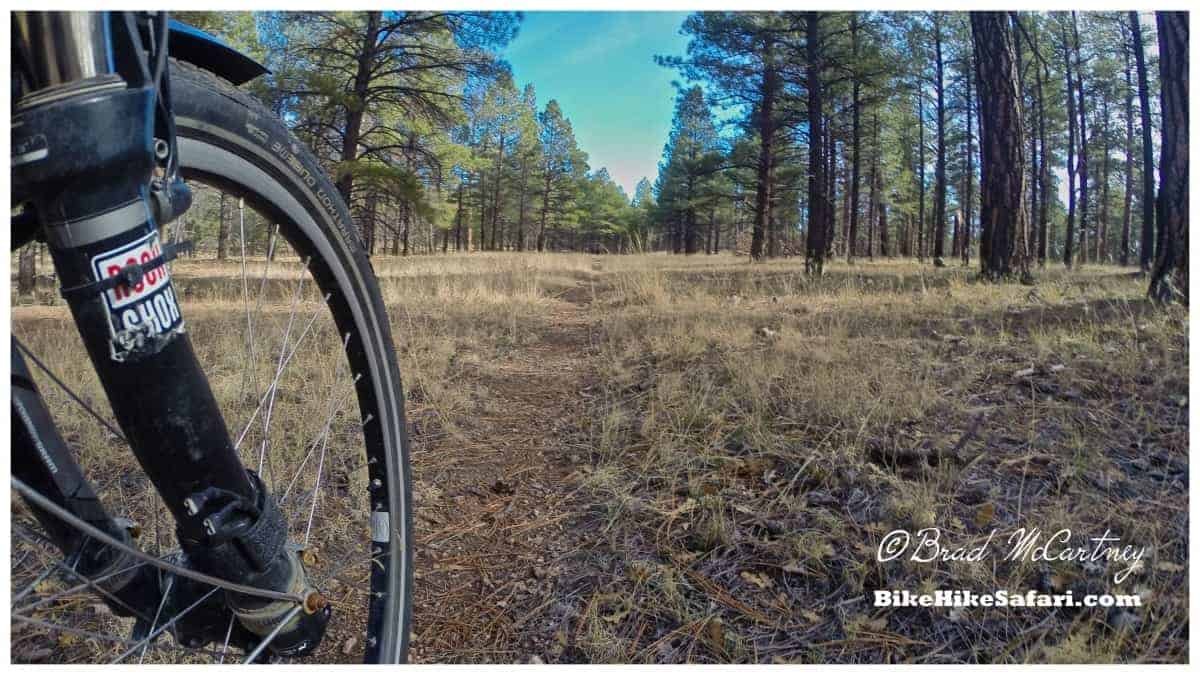 I found it hard to leave the Grand Canyon, after such an amazing hike that affected me in such a way that I will reveal in time. All the hiking and cycling over recent months has worn me down, mentally and physically. I’m ready for a break.

Not that I’m running out of energy, quite the opposite, I’m bounding full of it. Not that I’m jaded or not excited about all the amazing places I’ll visit in the future, I’m full of enthusiasm to visit these places. It’s more that I’m tired of the cold, the rain, the snow and the many days and nights alone. But onwards to the Arizona Trail I go.

The last couple of days I was glad to hear stories from fellow hiker Murray, a long distance hiker extraordinaire and a couple of other late season cyclists, Paul and Froukje (I hope that’s spelled correct) from Holland. But with so many amazing places on my agenda in coming weeks I chose to pack up camp with the knowledge that soon enough I’ll be in the warmth of the Senoran Desert and meeting new people.

It was near midday when I left the Grand Canyon Village to cycle a small section of the Arizona Trail, The AZT. The warmth of the cafe at Grand Canyon Village with it’s free WiFi and bottomless cups of coffee made it hard to leave in a hurry. The AZT runs from the Utah border to Mexico, an 800 mile long trail for hikers and mountain bikers. For the most part its a narrow, wild hiking trail. For the first 20 minutes or so I rode along sealed bike paths that linked the Grand Canyon Village and Tusayan. Then the real trail began.

Narrow and steep in some parts, technical in others but rideable, and more fun than zipping down the busy highway. After what seemed like hours but was in truth was much less I ended up at Grandview Fire Tower. It’s very close to the highway that I cycled on a week earlier and I could have taken the easy option of retracing my steps but I chose the harder, slower, more challenging option. I tried to climb to the top of the 24 meter high Tower but my old fear of heights kicked in. What a wuss. I thought I overcame it many years ago while rockclimbing, abseiling and canyoning but it re-appeared. Damn it was only 24 meters high.

With my tail between my legs I continued mostly downhill on some great flowing single trail for many kilometers until I set up camp around sunset under a large tree near the trail that I thought would shelter me from the frost. As darkness came, so did the cold and thick fog. The tree I camped under became a collection point for the moisture as it condensed during the night. Drip, drip, drip, onto the tent all night.

The following morning thick fog engulfed my camp then would disappeared and return again in a continuous cycle. As the temperature was below freezing the inside of the tent was covered in frost from my breath and the outside was frozen in all the places not hit by the condensed fog.

When I used my stove to cook breakfast it melted ice on the tent which promptly froze again. The early morning Backpacking AZT was characterised by flowing singletrail riding among the fog shrouded forest.

I noticed a single set of fresh footprints on the trail and hoped to catch up with owner that made them, but I never did. Within about an hour I made it to a place where cyclists make a detour around a steep canyon.

I followed a series of forestry roads until I rejoined the trail at a place called Russell Tank, a place to get water. There was no water, just a dried section of mud with hoof prints around it. Luckily I knew about the lack of water from Scott whom I met in Alaska while on the Dalton Hwy at the all you can eat buffet at Coldfoot.

I’ve been reading his great blog ever since. He advised in his blog of the lack of water on this section of the AZT and I paid attention. As a result I carried as much water as I could carry, 15 litres in total. Enough for several days in this cold weather, but damn heavy on the bike!

When it came time to head off on the AZT from Russell Tank I cycled into soft, sticky mud. In seconds my wheels would not turn. Mud had glued itself to the wheels and stuck to the mudguards. I had several choices. Take off the mudguards, they aren’t a good idea off road anyway and while cycling the Dalton Hwy in Alaska I had a similar problem. Or I could take the nearby forestry roads and link back up with the trail several kilometers further along. I chose the later.

I enjoyed the forestry roads. I cycled past many hunters that set up their comfortable campsite that contained every toy that a hunter could accumulate and fit into their monster trucks and trailers. In fact I liked the forestry roads so much I decided not to get back on the AZT but followed a network of forestry roads and Ranch roads through the Arizona wilds.

All went well until the roads got smaller and smaller with so many forks in the road that most were not visible on my GPS and certainly not on my paper maps. Still I continued, navigating towards a larger road further to the south. Visually things were not that easy to navigate as the low cloud had settled in for the day. Working out where I was from nearby mountains was not possible.

Sure I had lots of water, a GPS with maps, a smartphone with offline maps, a paper map and a ebook of the Arizona Trail that contained maps but navigating was at times a bit dodgy, specially when what appeared to be the most used road when I came to a fork in the road was not on any map!

Late in the afternoon I saw a grader on a road of in the distance. Must be the main road I thought, and it was. I casually cycled past the grader driver and within the next couple of minutes a couple of other vehicles with drivers wearing oversized cowboy hats.

The clouds were still very low as I cycled past what appeared to be an obvious lava field, I could see what might resemble a volcanoes which was confirmed by my paper maps. Several recently extinct volcanoes where in the area. As the sun was getting close to setting I reached the main highway 89. I stopped at a Gas station to rest and plan where to camp. While sitting on the bench outside the store a local Navajo guy approached me and gave some money in the form of spare change.

I didn’t want or need his money and politely decline. He insisted I take it. I took the spare change and he told me that I probably needed it more than him. As he walked away I observed him put his hand in his pocket and pull out more change. He stopped, turned to face me and returned to give me yet more change. ‘God Bless You’, he said. I started to think that my beard and long hair gave the impression that I was homeless!

Before Europeans arrived there were people living in parts of modern day, Utah, Colorado, Arizona and New Mexico in what has been termed Pueblos. Structures that vary from basic stone buildings to cliff dwellings to large villages. Some time around 900 years ago the Puebloans peoples abandoned them. There are many theories why they abandoned them such as climate change, drought, war, failed crops or they just assimilated into other tribes.

I cycled into Wupatki National Monument north of Flagstaff and visited all the sites open to the public. First I visited sites at Box Canyon and Lomaki Pueblo then onto Nalakihu and Citadel Pueblos and finished up at Wupatki and Wukaku Pueblos. The structures are mostly made of sandstone held together with some form of mortar. In some places the structures are built on dark volcanic rock mounds and the materials must have been carried quite a ways for the construction.

While visiting the sites I spied other Pueblo sites on both distant and nearby hillsides, it was apparent that there were many other sites not open to the public. The whole area must have been like a small country village with scattered farming peoples living in houses, part of a greater community of people not unlike some modern farming villages.

My introduction to Ancient Pueblos wet the appetite to seek out and visit more sites. In consultation with maps, rangers and Mr Google I planned a couple of slight detours from my planned routes in Arizona to visit a couple more sites in the future.

Several kilometers from Wupatki National Monument was Sunset Crater National Monument. My $5 entry fee at Wupatki also included Sunset Crater so I set off towards the extinct Volcanoes which I couldn’t see due to the continuing low cloud. It was still cold, I was cycling in thermals, fleece and a down jacket. Looking more like the Michelin Man than a touring cyclist.

The low cloud that started with me yesterday was still with me today. A side affect of cycling in fog or low cloud is the moisture seeps into clothing and facial hair over a period of time. So when I stopped to have a look at some lava flows my body cooled very quickly and I got a chill. I set off on the bike, shivering, which makes steering the bike a lot of fun, not. I must have looked like a kid jumping on a bike for the first time since removing the training wheels. This was made worse by the wind chill factor as I went downhill.

The hills arrived soon enough and I was able to pedal hard to generate body heat. I stopped at the visitors centre long enough to enjoy the central heating and watch a video. I learned of many volcanoes in the area, some of which erupted only a couple of hundred years ago. It was hard to leave but my maps showed another place nearby with Pueblos nearby so off I set.

Walnut Canyon National Monument is just outside of Flagstaff. I didn’t stop at Flagstaff but passed through on yet another foggy morning. The fog hung around as I visited the cliff dwelling of the Walnut Canyon. There are several hundred structures in this area and like the Pueblos of Wupatki they also abandoned their structures at about the same time and for the same unknown reasons. The fog added to the mystery of the area.

Wupatki to camp near Flagstaff = 79km

Next : Cycling from Meteorite Craters to the Apache Trail