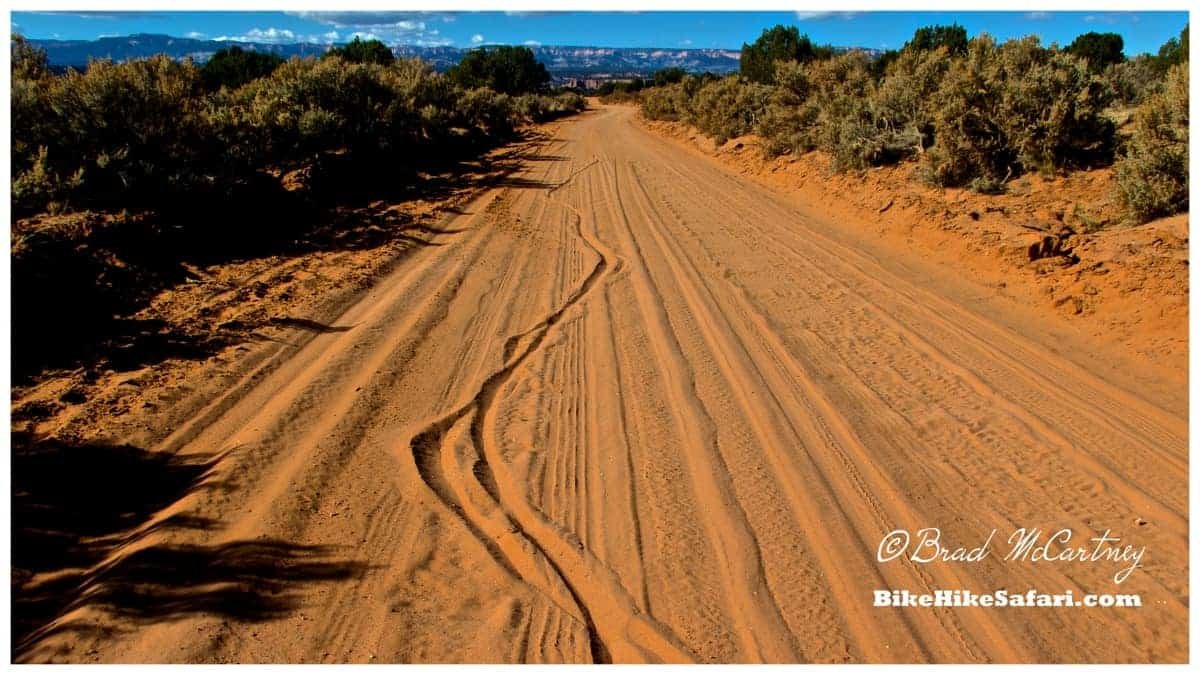 Cycling Cottonwood Canyon road is the short cut from Bryce Canyon to southern Utah and later onwards to Arizona. Initially the road is sealed and in perfect condition up to Kodachrome Basin State Park.

I made this my destination for the night and was pleasantly surprised to find it still open. A lot of campgrounds are ‘closed for the season‘. This one had hot showers and power points near the bathrooms to charge my electronics.

Kodachrome State Park was named after the film made by Kodak that had rich reds and enhanced the colours of the desert. Most GenY or younger if there is such a group wouldn’t have heard of it unless they’re interested in photography but I certainly used my fair share of it in my non-digital days.

In the morning I hiked several of the trails, the Angels Palace trail that afforded views over the campground and surrounding cliffs, the nature trail near the campground and the Panorama trail which at 10km is the longest marked track in the park. I hadn’t banked on spending so much time here, had I known of the beauty of the place I would have spent 2 nights here to enjoy and explore the area and take pleasure in watching the sunset over the desert.

It was afternoon when I set off from Kodachrome Basin State Park and started cycling Cottonwood Canyon Road. Initially the soft sand and gentle uphill grade made for slow cycling with occasional pushing. But it wasn’t long before I took the side trip to Grosvener Arch, one of the many natural arches in this part of the world. It’s also the place that the road improved and turned downhill following for the most part the Cottonwood River and the canyons that it produced, when it was flowing that is.

At a place called the Cottonwood Narrows I found what appeared to be a car park area and a hiking trail. I parked the bicycle and followed the trail, not knowing what to expect. It entered a narrow slot canyon, not visible from the road despite only being 50 meters away. I followed it downstream for about 400 meters before turning around. I didn’t know how far it went, whether I had seen the best of it or not. I later found out it was called ‘Cottonwood Narrows’.

A 2.5km long slot canyon that can be hiked fairly easily with a return trip to the start along the road. If only I had known that at the time I would have continued. In fact a Google search revealed that there are countless slot canyons in this area and the nearby area of Paria River, which starts its journey at Bryce NP. I wish I had known that earlier. Mental note to self, maybe, if possible do some quick research on the area you are traveling first!!!

By late afternoon and while nearing the end of the canyon section of the road before it opens up into a wider valley I was stopped by a man in a large pickup truck. He asked what on earth I was doing there. Satisfied with the answer he offered me a beer from his obviously ample supplies. This turned into another beer, followed by another and when that was finished he gave me more ‘to drink at camp’, he said.

Despite his views and opinions being so very different to mine I enjoyed hearing his differing views on the world and how USA was being screwed by politicians. He also offered me boiled eggs, cheese, Doritos.  I wobbled my way downhill after our conversation and found a sheltered place for the tent before consuming all the food and beer he gave me. I was not prepared to carry the food or beer the next day.

I was slow to rise the following morning. I planned to be in the town of Page, Arizona around lunch time, if possible and planned to stay there for a couple of days, if the town and campground had the right vibe! My body needed to warm up a bit and I needed to plan what to do and where to go over the next coming weeks. There is so much I want to see and experience in this area, avoiding the very worst of the cold weather being my main concern.

At the campground in Page I was surprised to meet a French / Canadian couple , Karl and Marie cycling with a young child, Kayla, not yet 2 years old. They too had cycled from Alaska, starting their journey only one week before me.

The cycle touring world is small but considering I cycled the more remote options on many occasions I have met much less cyclists than if I had taken the major roads. We chatted, had communal dinners together, which included cyclist sized portions and shared stories of the road and life in general. Makes me think that there is no reason or excuse that people can use for not following their dreams. We all agreed that Kayla would learn more and develop much quicker on the road than at home. Inspirational, very inspirational to meet them and share in their adventures.