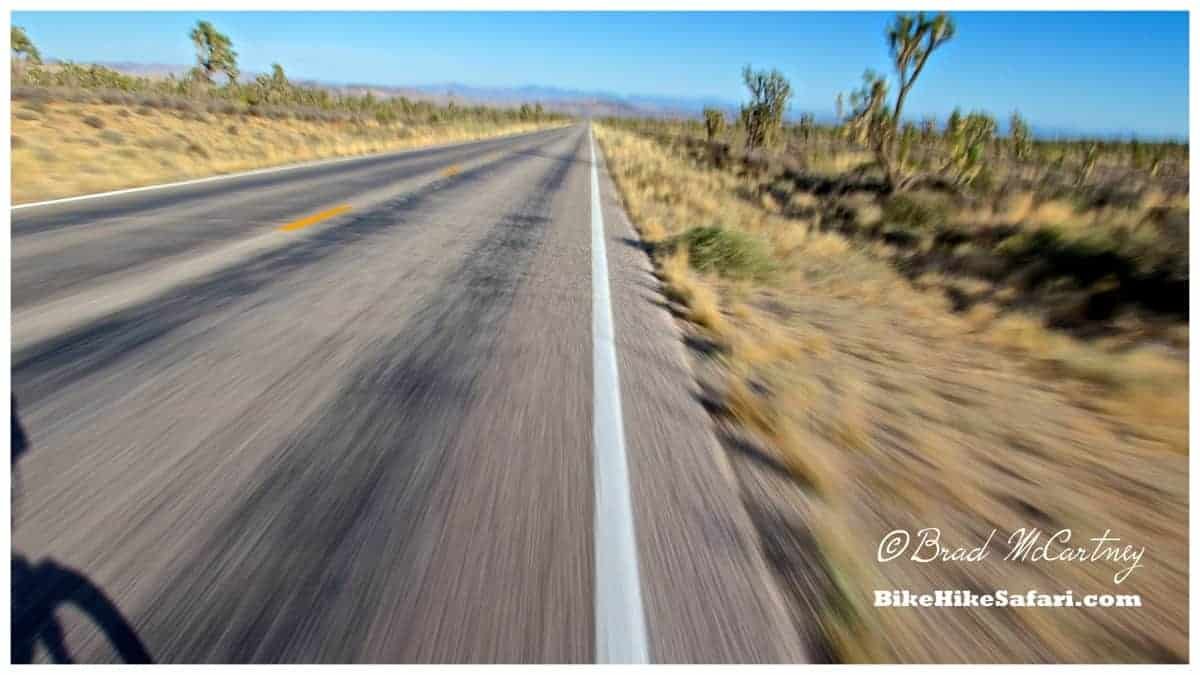 I saw a place on my map called Mojave National Preserve. I thought cycling the Mojave Desert would be a good idea. Unfortunately the town of Baker on the outskirts of the park was so hopelessly lacking in food for a resupply that I would be surviving on a diet of junk food. My plan of spending several days exploring the place was never going to happen as I might have envisioned it.

I set off as the sun was low into the sky and I had loading my belly full of as many calories as I could fit in. My aim was to see how far I could make it up the hill and find a secluded camp near the lava fields left over from the long extinct volcanoes that dotted the area. In fact the old volcanoes of the area are known as Cinder Cones. Looking at the area on a satellite picture is quite cool! And so my camp for the night was next to an old lava flow.

The following morning, not long after I set off I sighted another touring cyclist not far in front of me. I caught up and met Julien from France. We had met briefly in Yosemite National Park. I thought I was well ahead of him but he had mechanical problems and had to hitch hike from Yosemite to Mammoth Lakes to effect repairs. When I was snowed on near June Lakes in the Eastern Sierras he was several hundred kilometers further south near Bishop with not much more than some strong wind. We continued to the Visitors Centre in the Ghost town of Kelso.

After consulting the maps, speaking with the Rangers and taking a stock take of my woeful food supplies I decided that I would only be able to see one or two areas of the park. I really wanted to be cycling the Mojave Desert via some of the remote tracks that criss cross the park but my lack of food prevented me form achieving such a trip.

I decided that it would be best to head to the Kelso Sand dunes that contain sand dunes that tower some 200 meters above the surrounding desert. I thought it would be cool to be standing on top of the tallest dune to watch the sunset. Julien was of the same opinion so we made our way to the dunes.

200 meter high dunes don’t look so big when you are several kilometers away. It took about an hour for us to make our way to the top of the dune. It was longer and higher than I thought, not to mention all the stops to view the many animal tracks and take photos on route.

As we arrived at the top, everybody else started to head down, or should I say run down the dune. It had been a week since I had a shower at this point. Sure I washed myself regularly and tried as best I could to look after my personal hygiene but I didn’t think it was enough to make everybody leave! Did I smell that bad! Their decent caused the dune to make a booming sound that is described by many as being similar to the sound of a low flying aircraft.

This place is known for the sound that sand makes as it moves when descending down the dunes. I enjoyed the vistas very much and if the amount of photos taken are a direct correlation as to how amazing the place is then I was amazed x 129. Yes, I took 129 photos! Before long the sun set and we both made our way back to our bikes under the twilight. We both set up our tents next to the no camping sign, it was now dark and there was nobody around. The stars that night put on a magical display which I tried to capture on my small Canon G16 camera.

Early the next morning I still contemplated making a go of crossing the remote dirt tracks but my lack of food and now water at this point left me making the wise choice to follow the main roads via a water top up at Kelso and onto the roads that would take me to Las Vegas.

The hill climb that morning out of Kelso towards the town of Nipton caught me by surprise, it just kept going and going. Most of the time I have little idea how smooth, hilly or otherwise the roads are, I like the discovery of traveling by bicycle.

The road followed the railway line for the most part. When a freight train started its way up the climb I wondered how long I could stay ahead of it. I was traveling at about 15km/h up the 3%-5% grade which was much faster than I can normally climb, specially considering the water weight I was carrying, but eventually the train went past me at not much more than 20km/h. As it went past I slowed and cruised up the rest of the hill, stopping only to take photos and pump up my now slowly deflating rear tyre.

By mid afternoon I made it to the town of Nipton to indulge on a generous servings of Mexican food when around 100 or more bikers arrived. My tyre by now was now flat and in need of a new tube which I fitted while chatting with the bikers. They were social and many wanted to know about my trip. None of them were wearing any outlaw gang patches but many seemed to belong to some sort of club or another. All riding as a memorial to some biker who recently passed.

As the sun was getting low in the sky yet again I set off with the bikers not far behind me. With 95km to Las Vegas I made camp. To my surprise I made it to Las Vegas the next morning before midday. I’ve never covered that kind of distance in half a day, must be getting fit or something! I found a cheap hotel in Las Vegas that was even cheaper than most of the campgrounds that I’ve stayed at from time to time. Rooms are very cheap when staying mid week. So ends over 1000km of cycling the Mojave Desert. Time to hit the buffets of Las Vegas.