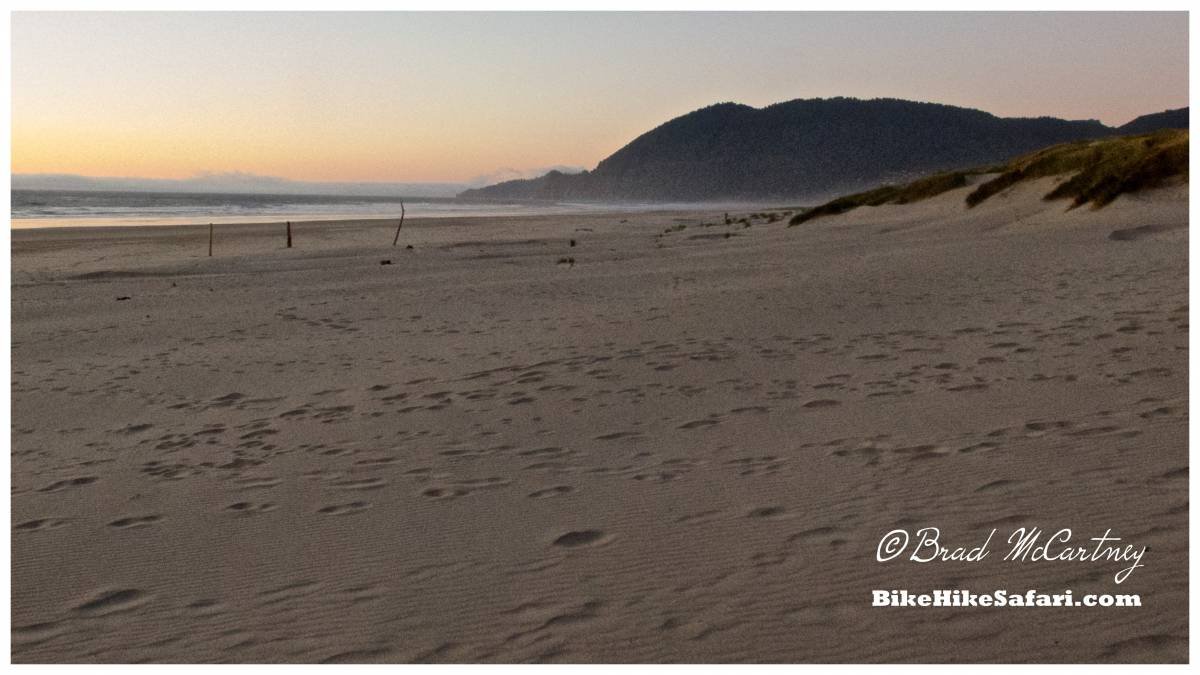 Oregon has these Hiker / Biker campsites that are set aside for people like me. They can’t be reserved, they are cheap, have flushing toilets and hot showers. My plan was take full advantage of these all the way down the Oregon coast. I would set off each morning not really knowing how far I would get and or how often I would stop along the way. Serendipitous cycle touring.

I started the journey south along the Oregon Coast from the Hiker / Biker campsite at Fort Stevens State Park about 10km from Astoria. There were several other cyclists there for the night. I spent much of my time working on my bike. I’ve had a rather bad run with flat tyres lately. 5 flats in 5 days. On each occasion I have pulled out a small piece of wire from the tyre which punctured the tube. I had run out of tyre puncture glue and had to borrow some from from other bikers at the site.

I set off to the first available bike shop at the town appropriately called Seaside to stock up on more glue before continuing to Ecola State Park which has some super steep climbs to a lookout over Cannon Beach.

I stopped just short enough to catch my breath before heading for fish and chips at the resort town of Cannon Beach. I spent some time people watching until I received a phone call from Melissa another cyclist I met several months ago while cycling in Australia.

We met up at the same campsite later that night at Nehalem State Park. Shortly after calling it a night I discovered a new animal of the night that loves human food, Racoons. They tried to get into our panniers looking for food, unlike Bears, they are easily chased away!

Cycling the Oregon coast seems to be such a well traveled route that I met some of the same cyclist that were at Fort Stevens the day before, the Bellingham group. Considering the rather remote areas I’ve previously been this is all very social.

The following day Melissa and I set off to Tillamook which is well known in the area for its cheese and Ice Cream factory. The Bellingham crew arrived not long after us. American cheese is crap. It tastes like plastic, but there was a cheese sampling area and I now know which cheese I need to choose.

As a hungry cyclist I samples more cheese than was possibly appropriate, but Melissa went back several times for samples. So is the veracious cyclist appetite. A triple scoop serving of ice cream served as first lunch or third breakfast until we made it to the coast to again eat. At this point Melissa headed inland as her 30000km journey around the world is into its last days.

I continued a short distance to Cape Lookout State Park for my beachside camp and hot shower. As the weather is still sensational I spend the last moments of the day watching the sun set over the Pacific Ocean. Well, not really sunset, more like coastal fog rolling in.

Next : Cycling the Central Oregon Coast