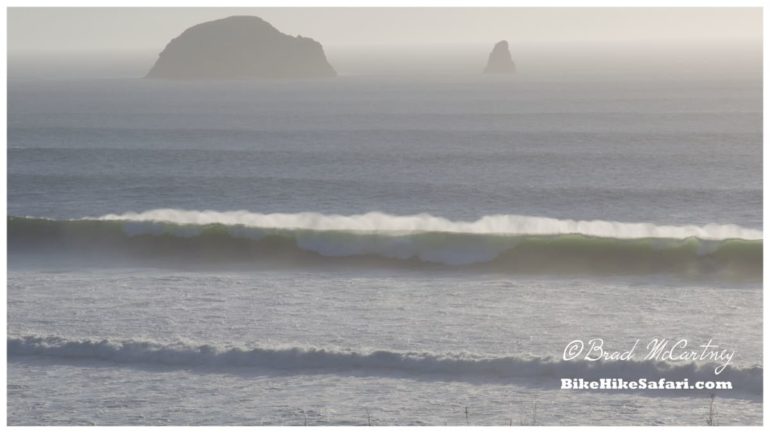 Camping in a thickly wooded environment meant that the sunlight failed to filter down through the tree canopy and thick fog onto my eyelids until much later than normal. Even as I departed later than I would have liked the shroud of fog made it all still rather dark. I turned on my rear flashing light to ensure that there was no excuse for the traffic not to see me as I meandered along the southern Oregon Coast.

The days ride was rather uninspiring, following ridge lines and lakes for the day. I didn’t stop at too many places but did find amusement by stopping at a weigh scale which indicated that my bike weighs 100 pounds! Later I arrived at the rather large town of North Bend to discover some free WiFi and power outlets. I have become good at sniffing out such modern necessities.

As the shadows appeared to be growing long I realised that it was about an hours ride to my Hiker / Biker campsite at Sunset Bay. The evening ride was the highlight of the day, the fog only burning off in the very late afternoon. I was gifted with views of the late evening sun lighting up the coastal inlets and bays. I was the only cyclist at the campsite that night.

In the early hours of the morning the lightest of rain began to fall. It was more like excess humidity than rain, it fell so light onto my tent and the surrounding foliage. I had only recently checked the weather forecast which did not speak of rain so I surmised that it was only a short morning drizzle so I sat in the tent reading about Captain Cooks exploration of the Pacific and drinking many more than one cup of caramel flavoured coffee. It was well after 10am when my feet hit the pedals.

The fog continued as I tried to keep things interesting by taking side roads rather than the main highway. It wasn’t until I stopped for an early dinner of fish and chips at the town of Port Orford that I was graced with spectacular coastal scenery. I lingered long staring at the ocean, the waves, the surfers and the setting sun before I needed to make it to may campsite. I arrived as it was getting dark and again was the only cyclist.

The night was calm and clear which dropped the temperatures into the single figures (Celsius). Today would be my last day in Oregon. The coastal scenery in the far southern region of Oregon is equal to or better than anywhere I’ve seen on this planet.

It was hard for me to travel more than 500 meters at times without having to stop and pull out my camera and take photos. All the while I was wondering why all the RVs just kept speeding past me. Were they even looking out the window. I was traveling slow but still had to stop to take it in.

As the shadows began to lengthened I found myself at the California border, it just appeared without me even seeing it. I was singing along to some random 80s song when there where 3 cyclist on the side of the road. So I stopped. One of them said, ‘you should really take a picture of the sign‘. I glanced up. ‘Welcome to California‘.

Next : Cycling the Redwoods of Northern California