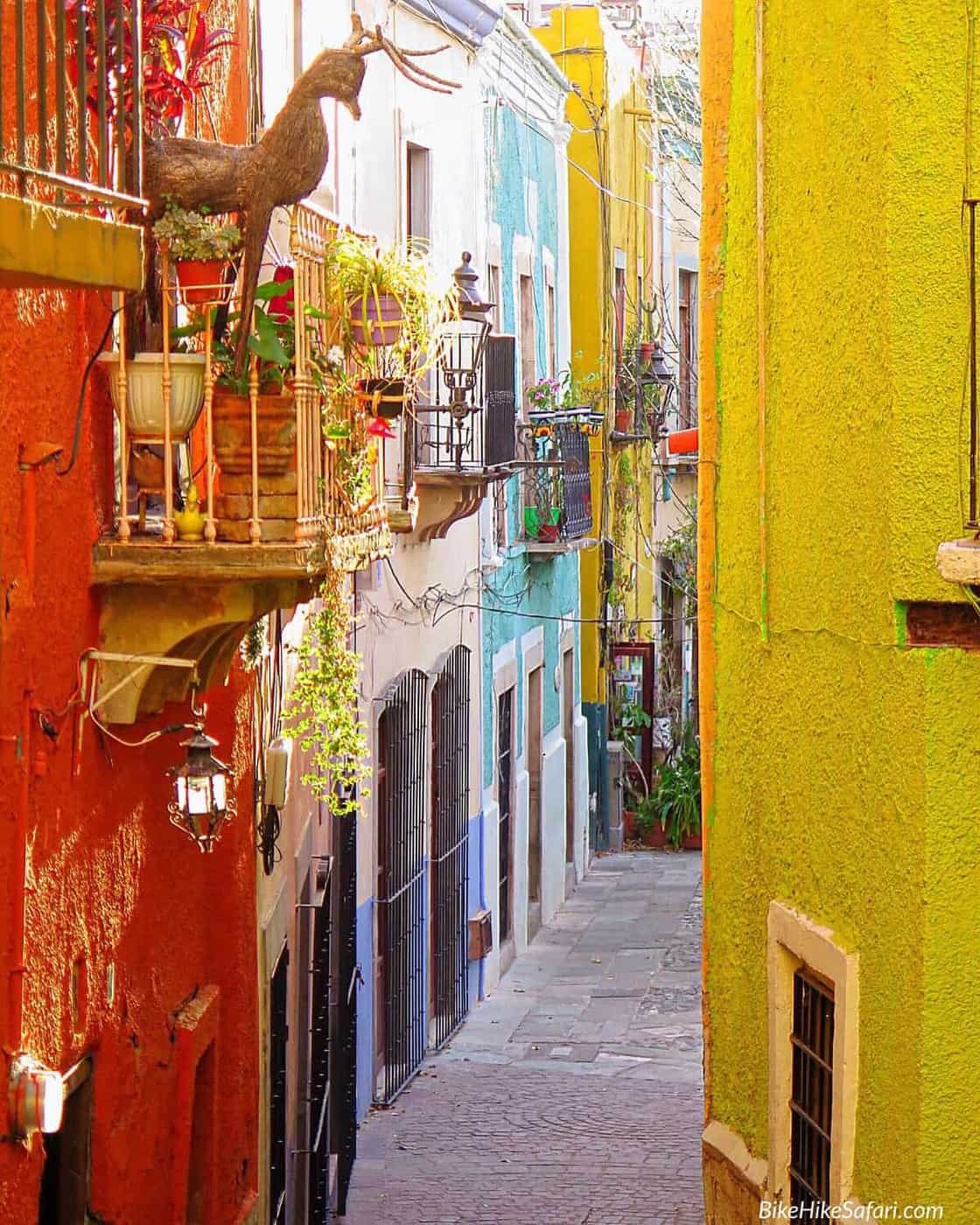 Guanajuato, in the colonial heartland of Mexico is a colourful city. It must be a citywide decree that all housing must be painted loud and bright. It’s a also a strong university town which might account for the unappealing amount of tagging graffiti that stain the walls of almost every building.

I’m supposed to be riding from Alaska to Argentina. So why am I heading north then west then east? Well, because Mexico is full of awesomeness and it’s a big country. Much bigger than most people, including Mexicans, realise. In recent weeks I’ve based myself in San Miguel de Allende. It makes a great central base to explore. Guanajuato was only a short bus ride away, so when my cycling friends Gareth and Jean were there I couldn’t resist the idea of catching up with them again.

The greatest pleasure in visiting a city like Colourful Guanajuato comes from aimlessly wandering the streets. Letting serendipity be the guide. We wandered for hours. Up steep streets, through narrow lanes, past local only areas that see little tourists and past countless colourful buildings laced with unappealing graffiti.

There are countless opportunities to chillout in one of the many open plazas. Our daily routine involved eating and sipping coffee in one such plaza while people watching.

Mexicans are much more outgoing and spontaneous than people of most other nations. On any random evening in Guanajuato (and many other towns in Mexico) there can be a traditional musical band wandering the streets singing traditional songs. All with an entourage of adoring fans singing and dancing.  Joining such a nightly chorus is one the many highlight of my travels.

Guanajuato has possibly one of the strangest museums in Mexico. Guanajuato Mummy Museum, or ‘Museo de los Momies de Guanajuato’. In the late 1800s the local cemetery was full. To make room for the growing dead population bodies were exhumed. Rather than decomposing they mummified. Much later they were put on display.

Many years ago it was fun for the local university students to visit the mummies and eat part of them, yes eat part of them. A University  prank that was taken to a whole new and disgusting level. Authorities placed the mummies inside climate controlled glass display cabinets. The Mummies of Guanajuato are safe now.

Unfortunately, my time in Guanajuato coincided with a bout of illness which floored both myself and Gareth. For 3-4 days our sneezing, running noses and general malaise had us unable or more correctly unwilling to leave our hotel rooms. Getting sick is no fun. Getting sick without the comforts of home is even less fun. Luckily it came and went and we were all in great shape to get back to the traveling life.

During my time with Gareth and Jean we planned a rather adventurous ‘off the beaten path‘ route through areas of Mexico that see little tourists. It is still in the early stages of planning and will be several weeks away from now, so stay tuned. In the meantime, I’m heading back to my new home base of San Miguel de Allende.