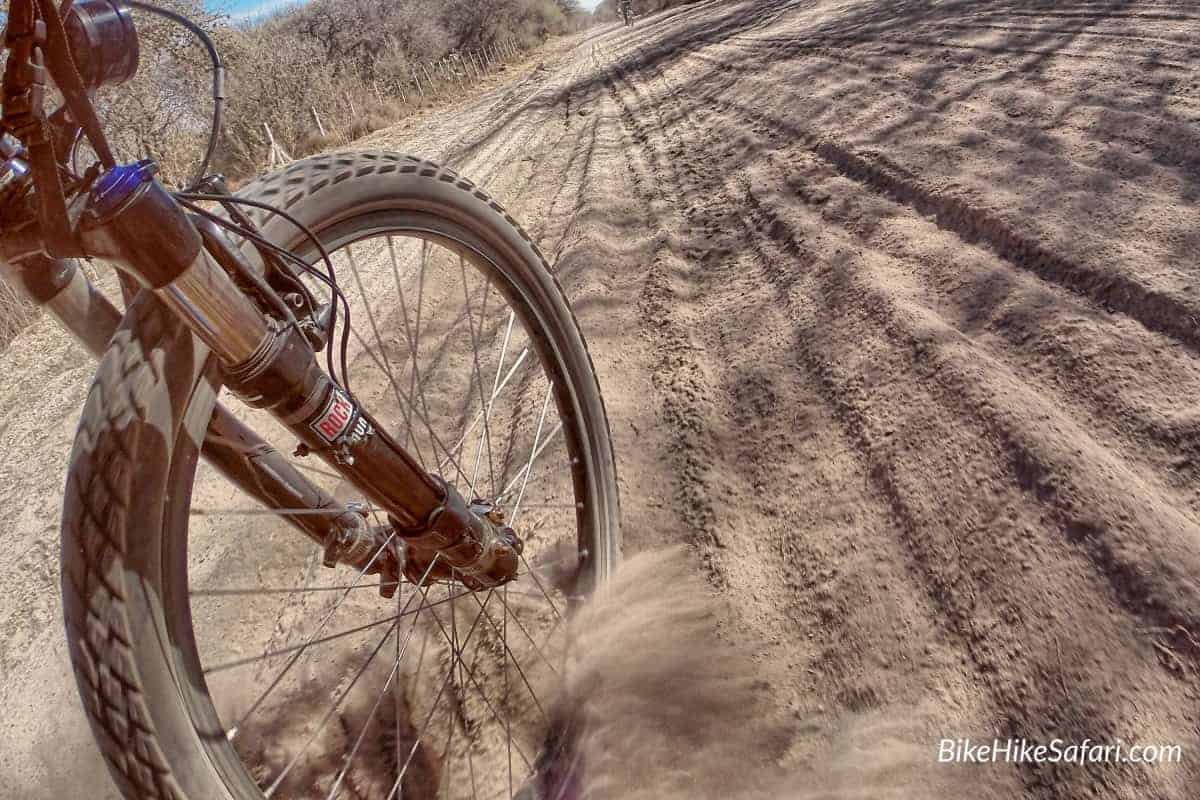 Given a choice I always prefer the opportunity to ride on back roads. Poor maps, an even poorer grasp of the Spanish language and a lack of local knowledge sometimes keep me on the busy roads. Today I had two lovely local girls as my guides, Edith and Regina. Their plan was to follow the network of back roads to the historic town of Dolores Hidalgo, a town that was instrumental in the struggle for Mexican independence.

It was a cold morning in San Miguel de Allende when Edith, Regina and I cycled out of town. We followed the railway line for only a short distance before peeling off onto even smaller trails. Our route for the day consisted of soft powdery dust, rough rocky trails, cobblestones, old bridges and minimal sealed roads which we shared with other road users.

This is the colonial heartland of Mexico. Every Hacienda appeared to have its own church, mostly in ruins.  Some are locked, some have trees growing through the floors and some are covered in either graffiti or artwork or both.

Some 20km from San Miguel we stopped at the pueblo of Atotonilco for a breakfast of Quesadillas and cinnamon coffee. Another 15km later we stopped in another small town called Rincon de las Adjunctas for Carnitas. Not long afterwards we were in Dolores Hidalgo, it was lunchtime. The ride from San Miguel de Allende to Dolores Hidalgo was 42km in total. I was still hungry.

We wandered around the centre of town. I learned that the first public cry for Mexican independence started in this town. In 1810 the priest Miguel Hidalgo proclaimed freedom from the steps of the church, thus commencing an 11 year battle for independence. This town is known as the birthplace of Mexican Independence.

Wandering around the plaza I enjoyed a tequila flavoured ice cream. Yes, a Tequila flavoured ice cream. It didn’t have the same kick that makes you shake your head after drinking a nip of tequila but it was a good experience. Nearby a local potter went about his business of making clay pots and cups. Dolores Hidalgo is a much more typical Mexican town. It has yet to cater to high end demanding tourists with over the top expensive shops and restaurants, unlike its nearby neighbours of Guanajuato and San Miguel de Allende. I liked Dolores Hidalgo.

All too soon we followed the same dirty, dusty trail back to San Miguel. If it were not for the local knowledge of Edith and Regina I would not have discovered the back roads and learned the history of the area. Muchas Gracias.

Next : Hanging out in San Miguel de Allende