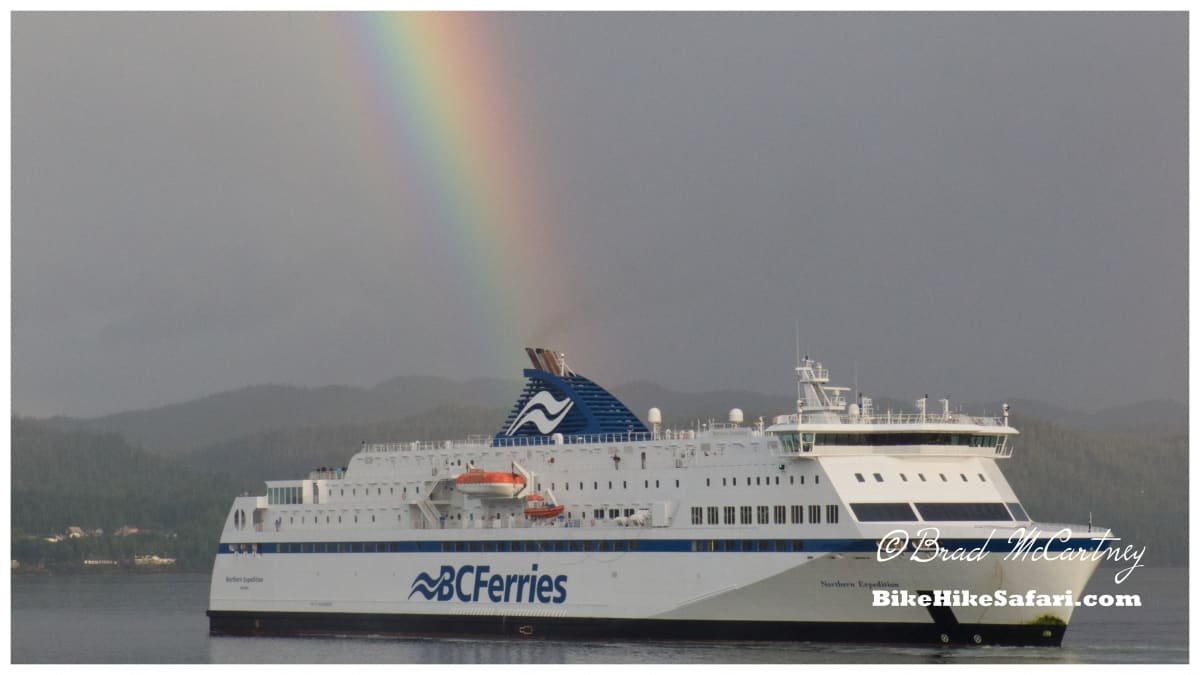 It’s been a while since I’ve updated anything on this site, my computer was taking issue at its harsh treatment over recent months and decided it needed a rest, the replacement parts are making it feel so much better now! Breakdown of electronics, the bike, camping equipment and the body are part of the journey, all of which are fixable, so far!

I left the coastal rainforest town of Stewart on the last push to make it off the Canadian mainland to Vancouver Island. It was raining as usual and I didn’t feel any need to cycle the 60 plus kilometers back to the road junction that I’d already cycled so I planned on hitch hiking. I’ve hitch hiked twice on this journey and in some sort of strange fate both occasions was with the same person, John from Oregon. Back in May he was traveling with his wife Annie and they gave me a lift through the Whittier tunnel in Alaska. This time he was traveling with his mother-in-law, Alice. They were returning from an aborted canoe trip on the Teslin river.

I bid farewell to John and Alice at the Junction of the Cassier Hwy and the Stewart turnoff. Within 3 kilometers I was pedaling past a small stream with some migrating Salmon when whoopsie, the left crank fell to the roadside. This was the culmination of a problem that started many weeks ago. The eccentric bottom bracket seized due to internal rust. A truck driver let me use some of his WD40 to spray into the frame tube to loosen the bracket. It needs to be loose for me to adjust the chain or remove the rear tyre when I have a flat.

Well, after only 15 minutes of spraying the WD40 I became impatient and started banging the crank to loosen the bracket. I succeeded in damaging the bolt holding the crank in place. At some stage it fell off while cycling. I didn’t think too much of it. I hoped I would make it to a larger town at some stage for repairs.

A passing motorist saw me scratching my head and offered a spare bolt to make a temporary repair, it worked. And so I made it another couple of days to the town of Terrace where a profession fix was done at McBikes next to McDonalds. My poor bike has coped a flogging lately and my preventative maintenance has been almost zero so I must accept that things like this will happen.

The season is changing quickly in the Northern latitudes. I love the yellow, reds and Oranges that mix with the green and grey of the rainy overcast skies. I seem to be seeing more beauty in the landscapes the worse the weather gets. It takes me a couple of days of cycling through consistently average weather to make it to my final destination on the Canadian mainland, Prince Rupert.

Met a couple of cyclist in the last couple of days, Andy from NZ and Michael from Denmark. Several days ago I was mistaken for Andy by some RVers who gave me some food and drinks thinking I was Andy, so I had heard about him and knew he was somewhere nearby on the road. We looked nothing alike.

He was skinny with dark haired mohawk. Maybe all cyclists look the same to RVers! On the last day into Prince Rupert I met more cyclists, Alexander and Marion from Switzerland, they mentioned many other cyclists at Prince Rupert. On this day it was the first time I had a tailwind since 11th July when I cycled into Inuvik in the Canadian Arctic! That’s a long time with headwinds!

The ferry took me to Port Hardy on the North of Vancouver Island. The journey on the ferry was made all the more pleasant by occasional sightings of Humpback Whales and Orcas. I’ve been traveling solo for quite a while and it was great to meet up with other cyclists and a lone motorbike rider, Jaimie from Oregon who kept the conversations going on the very long rainy journey.

The ferry arrived in Port Hardy close to midnight. Jaime and Hamish from NZ on a bicycle and myself camped about 200m from the ferry terminal next to the public boat ramp. We were all tired and couldn’t be bothered with looking for a campground which was located several kilometers away near town.

After several weeks of average weather I’m starting to get a bit tired of the rain and headwinds, hopefully they change soon! The average weather will make me appreciate the good weather when I finally start to see it again.