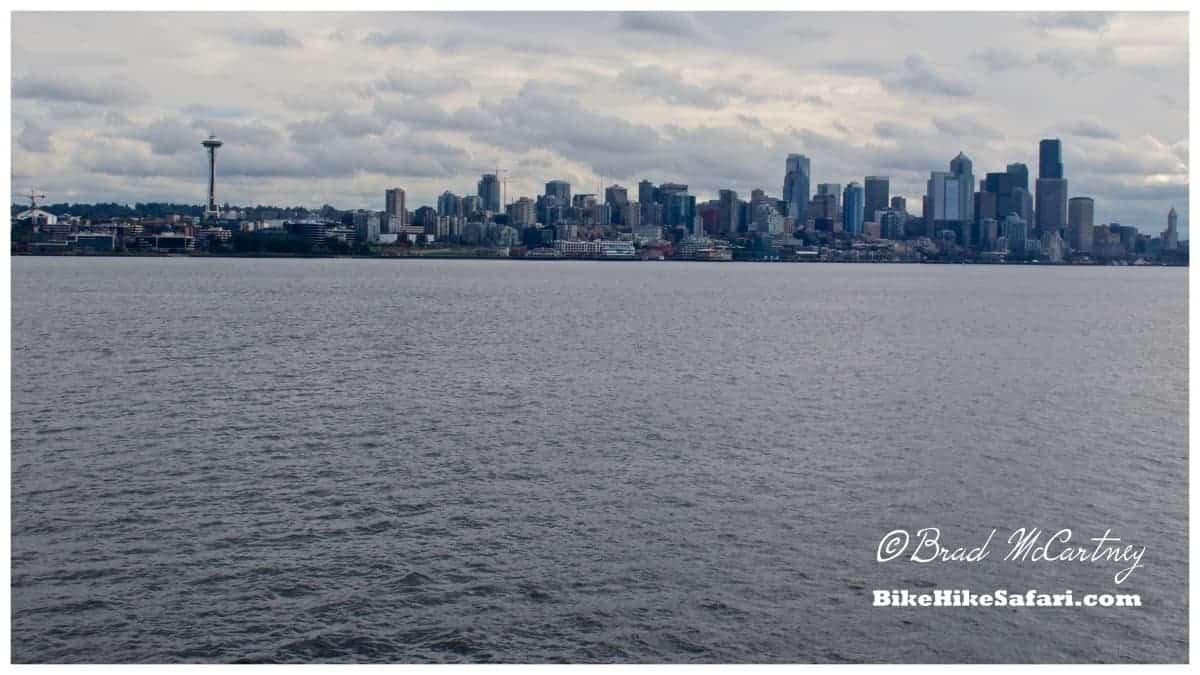 My departure from Canada and arrival in Washington bought a somewhat last minute change of plan. Initially I was going to cycle round the Olympic Peninsula and follow the coast all the way to California. Instead I went to Seattle for a short visit before taking on the Cascade Range, which is part of the Pacific ‘Ring of Fire’, to visit the iconic volcanic mountains of Rainier and St Helens.

My arrival at Port Angeles was greeted by the usual light rain that the Pacific Northwest is known for. I arrived late so set about riding to the nearest campground. I found support and conversation with local bike commuters on their way home from the daily grind. Rain eased by the following morning.

I set off on the Discovery Bike Trail about 30km before taking a rather random route across several Islands until I jumped on board the Bainbridge Island Ferry. It was an impressive way to arrive in downtown Seattle. I was not impressed by what happened next. I keyed in an address for the lovely suburb of Phinney Park where I was staying with Brittany for the next couple of days.

The staff at Garmin must have been highly intoxicated when they suggested that my route take me on route 99 instead of the cycle friendly paths and roads nearby. As I cycled hard trying not to be taken out by the passing cars a construction crew worker asked me if I was ‘F#kin Stupid‘ I should have replied’ I must be for following this F#kin Stupid Garmin GPS‘.

I should have known better than to follow the GPS path. At one time while cycling along the Dalton Hwy in Alaska it told me to take a right turn into a river! It mentioned the words turn left onto winter road! Enough said.

Within hours of my arrival in Seattle I found myself in a Malaysian Restaurant with Brittany eating my favourite food, Laksa. Oh how I have missed Laksa.

Seattle has influenced the world in many ways, as I learned. The grunge music scene developed here, among others. Microsoft and the Gates foundation are here. Starbucks and the worldwide love affair with coffee are somewhat blamed on Seattle and then there is Boeing.

The number one tourist attraction is without doubt the REI store. Multiple levels of outdoor gear and several hours of conversations with staff. I spent hours there and replaced my backpack which no longer fits my waist, I’m too skinny for it!

I visited the store after a trip to the Flight Museum to listen to an Astronaut talk about the replacement for the space shuttle. Not the usual way I would spend a Saturday afternoon but I was riveted to the talk and subsequent walk around the aircraft on display. Planes I’ve only ever heard about but not seen such as Concorde, F15 (the plane in Top Gun) and the Blackbird spy plane which could fly at over Mach 3 and above 25km in altitude!

The toured the Boeing factory north of town. I can’t quite answer why I went. Maybe I was inspired by my Uncle who spend a lot of time working there over the years. Suffice to say I found the sheer magnitude of production to be somewhat mind boggling. 747s, 787 Dreamliners and more being produced in front of me.

I enjoyed my time and awesome company in Seattle and with a very, very short weather window I set off into the Cascade Mountains.