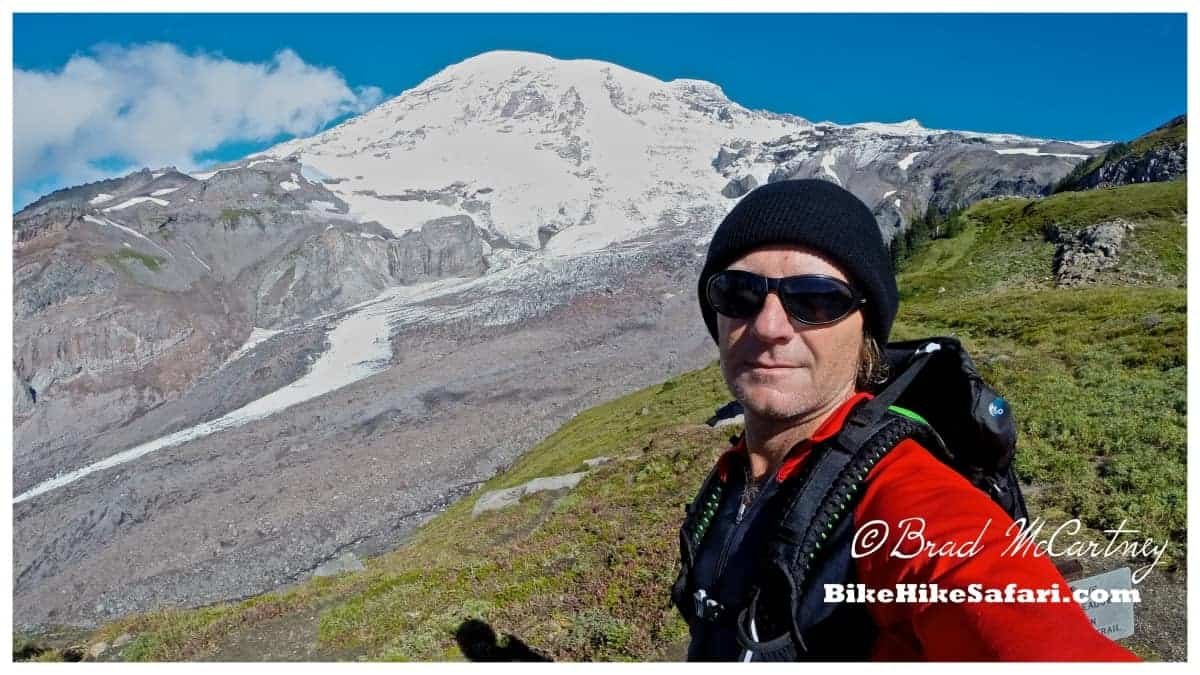 Mt Rainier is the highest mountain in Washington at 4392m. It’s a volcano and dominates the Cascade Mountain range where I planned to cycle and hike through.

Grey skies dominated the Seattle skyline as I cycled south on the network of bike trails to the township of Enumclaw. By 4pm it was pouring with rain. I was soaked and cold. I headed for the local camp ground and put the tent up in record time before slowly but surely drifting off to sleep.

It rained all night. At least it was raining every time I woke up during the night. I knew there was a fair chance of rain from the weather forecast, but as I left town I was hoping that the expected good weather in a couple of days would actually happen. It was a small weather window and I put my faith in the hand of the weather forecasters.

It was difficult to get out of the tent into the pouring rain and start riding. The road steadily climbed and by mid afternoon I was tucked into my tent at White River camp ground in Mt Rainier National Park. The nearby White River was swollen by the rain and impressively loud. It was late in the season and there were only 3 others in the campground. The rain again continued all night.

White River Campground was my planned base for a day hike in the area. The weather had other plans. After the morning drizzle and several coffees I saw what looked like a patch of blue sky. I quickly got my hiking gear ready and started up a very small section of the Wonderland Trail to Sunrise which was about 600 meters above me.

The Wonderland Trail is Washington’s premier long distance hiking trail which I’d only heard about a couple of days earlier while in Seattle. Had I heard about it earlier I may have put it on my to-do list of hikes. Maybe another time. For now the rain had let off but the low cloud obscured the view of Mt Rainier and the surrounds.

I hoped to get a quick bite to eat in the lodge at Sunrise but it closed for the season only a couple of days prior to my arrival. I sat there looking at the low cloud and no view and decided to head back down and make my way to the other side of the mountain. To a place called Paradise. My plan to hike 16km of the Wonderland Trail and Glacier Trails would have to wait for another day.

By 2pm I was packed and on the bike. On the downhill hill section I was so cold I had to stop for fear that the uncontrolled shivering would make me crash. I put on every layer of clothing I had and continued to the turn off for Paradise and yet another climb.

It was late in the afternoon and there were no campgrounds on route but I set off thinking something would work out. As the sun was starting to set I wheeled my bike into a picnic area and set up my camp out of the view of anybody. Then the weather really came in and I was tent bound the whole next day. I was bored by mid day but the rain continued to fall quite heavy. I had enough food so just kept reading and updating my journal.

No rain overnight and rather chilly when I woke in the morning. I thought to myself, that could mean there was no clouds last night so it might be clearing. Blue sky. I was right. I packed up in record time and set off on the long climb. Two hour later I was at Paradise. Most people couldn’t believe I had cycled the mountain. They thought it was hard, I thought it was amazing, one of the best climbs I’ve done.

There was a lot of people at Paradise, half the population of Washington it seemed was there, it was the weekend and the weather was grand. I left my bike with the friendly staff at the Information Centre and set off on the Skyline Trail, a 10km loop walk with about 425m of elevation gain. I hadn’t heard about this hike until I started to research my route. What an impressive hike.

Mt Rainier dominated the skyline above but I took a couple of minor detours off the Skyline Trail and was able to get a better vistas of the peaks and the glaciers. My eyes were fixated on Mt Rainier and the Glaciers so when I turned around I was equally in awe. I saw clouds fill the valleys and could see my next destination of Mt St Helens and other notable peaks in the area such as Mt Adams and Mt Hood in distant Oregon. Its a big call but I would rate the Skyline trail as one of the best day hikes I have ever done, yes it was that impressive!

By 2pm I was fed and watered and back on the bike for the descent to Randle where I stayed for the night hoping to have another good day for the climb to Windy Ridge and formally explosive Mt St Helens.