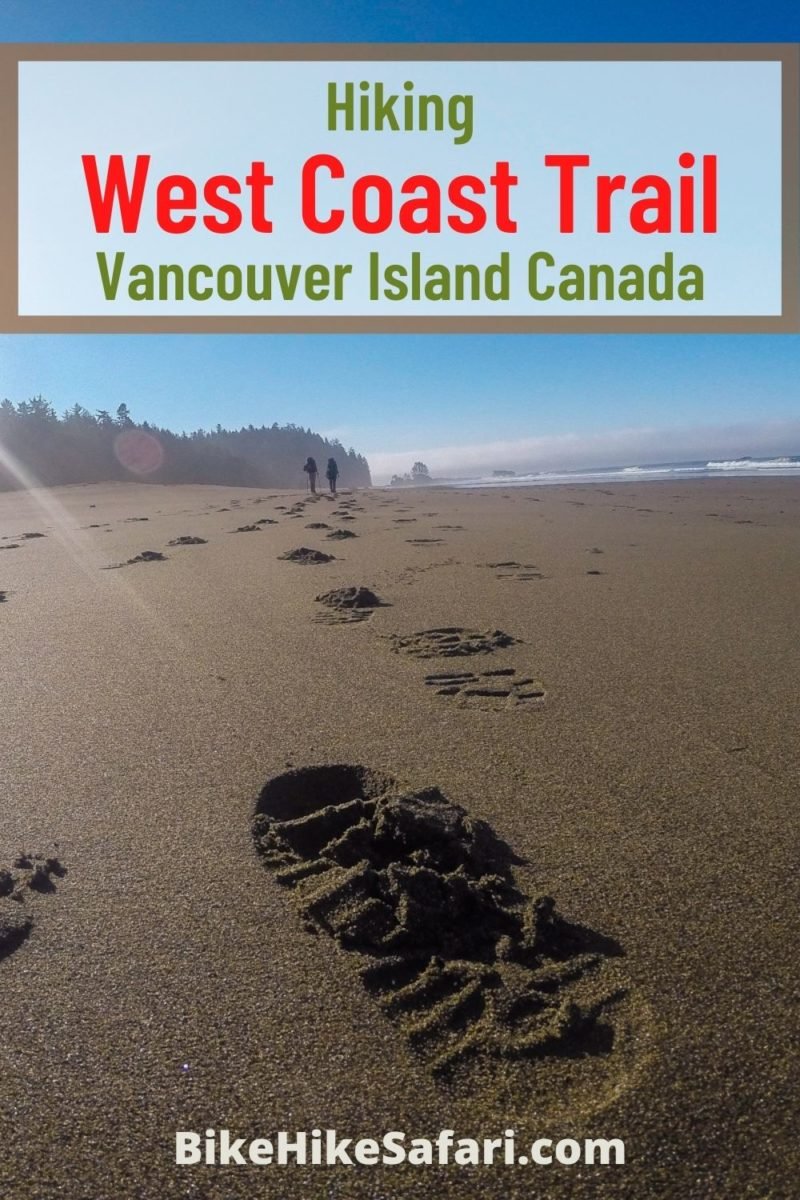 This hike is widely acknowledged as the best hikes in Canada. It reminded me a lot of the South Coast Track in Tasmania. Absolutely amazing.

Getting to the Start of the West Coast Trail

I arrived in Victoria with amazing weather which looked set to continue for the next week. Although my body needed a rest from the long cycle journey from the northern latitudes. I just had to go. I started at the Northern Trailhead of the 75km long West Coast Trail with no set plan on where I would camp each night or how many days I would take.

The hikers transport bus was full when I departed Victoria. I knew this would be different from the same hike I did here 17 years ago. Yes, I’ve hiked the trail before. On that trip I didn’t see one other person during the whole hike!

Do you need to update your gear for the West Coast Trail? Check out the following gear reviews.

I didn’t have a pre-arranged permit to start the trail. I arrived at the Parks HQ and was put on a wait list for all of 3 minutes until a family walked in to advise there was a cancellation. It was better for them that I ‘buy’ the permit from them rather than have them cancel and lose their money. So I ended up on the trail at a significant discount to others.

A pre-trip briefing was organised to inform people about the trail and so it was 2pm before I started walking with no idea how far I would get. 7pm, nearly dark and I rolled into Tsocowis Creek Campground 17km from the start. I was greeted by all the other friendly hikers.

There was a communal campfire with one of the local first nations guys passing on stories from the area and singing songs from the past. A privilege to be a part of that. I was interested to hear him sing a song about the arrival of Captain Cook. More especially cause I’m currently reading his journal from his travels in this area. Before long it was dark and everybody was in bed very early.

The was sky overcast and sea fog rolled drifted in. The tent was wet. So was anything exposed to the atmosphere. No use trying to dry things, might take all day. I set off for Tsusiat Falls and made it there for lunch. On route I saw some Couger and Bear tracks. I spoke with other hikers who confirmed seeing them too. When I was here 17 years ago I camped at Tsusiat Falls. Back then there were no other people there and the waterfall was pumping. This time people were swimming and washing in the same water I was drinking.

I kept going to Cribs Creek camp for the night a total of 25km, I wasn’t the only one with that idea. Paul and Sally who I camped with last night also made the long hike. On the hike it was necessary to take a ferry across a deep inlet. They offered me fish or crabs to eat (at a price) but I declined and kept moving to the campsite at Cribs Creek. About 1km before the camp I spotted a Sea Lion Colony on some rocks at Dare Point. I was able to ‘sneak up on them’ and get some photos. It was packed when I rolled in to camp around 7pm. Once again there was a communal fire next to my camp which I joined in the great campfire company and conversation. I went to bed that night thinking I could get used to this social campfire trekking.

A relaxing third morning with only a short walk round Carmanah Point Lighthouse to Monique’s Cafe. I managed to scare the crap out of a snake as it slithered off the track in front of me. I didn’t even think there were snakes in Canada! Monique’s Place is a small remote shack on the beach that many a hiker has frequented over the years to eat burgers and drink alcoholic beverages among other things.

They cooked me up a hamburger and gave me several beers to drink while I updated my diary and enjoyed the somewhat tropical weather. It was not the cheapest burger I’ve ever had but it was better than dried crackers with salami and cream cheese.

No rush to leave the place as the tides were too high to make it around Bonilla Point. When I did make it there I had to wait about 45 minutes for the tide to recede before continuing to Walbran Creek for the night. It’s important to know the tides and time the crossing of certain areas with the low tides. The infestation of sea gulls in Walbran Creek meant feathers and goodness knows what ended up in my drinking water! I’m used to drinking water of questionable quality, so no big deal.

Again another social night round the campfire. I was entertain by an older gentleman who had drank 1 litre of Canadian Cinnamon Whiskey. I got to sample the dregs and it tasted quite nice. Shame his hiking companions were still out on the trail and didn’t arrive until 10.30pm. They took 12 hours to walk 9km! Something tells me the rest of the trip wouldn’t go well for that group! Still had fun chatting round the fire.

I walked along the coastal route and crossed Adrenaline Surge Channel (very dangerous, especially alone). I went along this route many years ago and it was a highlight then as it was on this trip. Its a rather dangerous crossing which I was told has claimed 2 lives.

There’s no room for a mistake scrambling on the slippery surface near the surge channel. I continued along the bench until hitting the impassable headlands at Cullite Cove. People were on the other side but it was not possible to cross.

I retraced my steps back to the huge suspension bridge and ladder climb at Logan Creek before making it to  Campers Creek where yet again there were social gatherings around the campfire in the evening.

The last morning was a very early start for most of us as we wanted to catch the low tide at Owens Point. Owens Point had several caverns sculpted by wind and waves. I was joined there by Paul and Sally again along with Brittany and McKay. We all spent time exploring the caverns.

The hike from Owens Point to Thrasher Cover was a lot of slow rockhopping which tested both the knees and ankles. Leaving Thrasher Cove we formulated a plan to race up the 1 km of ladders to the main trail. There were heaps of ladders and several hundred meters in elevation gain. I managed 14 minutes, a new record I believe.

From there we all  limped and staggered into Gorden Point and the end of the trail. We waved down the ferry and signed off at the registration centre. West Coast Trail complete. Are you considering hiking the West Coast Trail?

Next Post on my Cycling and Hiking trip from Alaska to Argentine :
Canada by the numbers and in photos