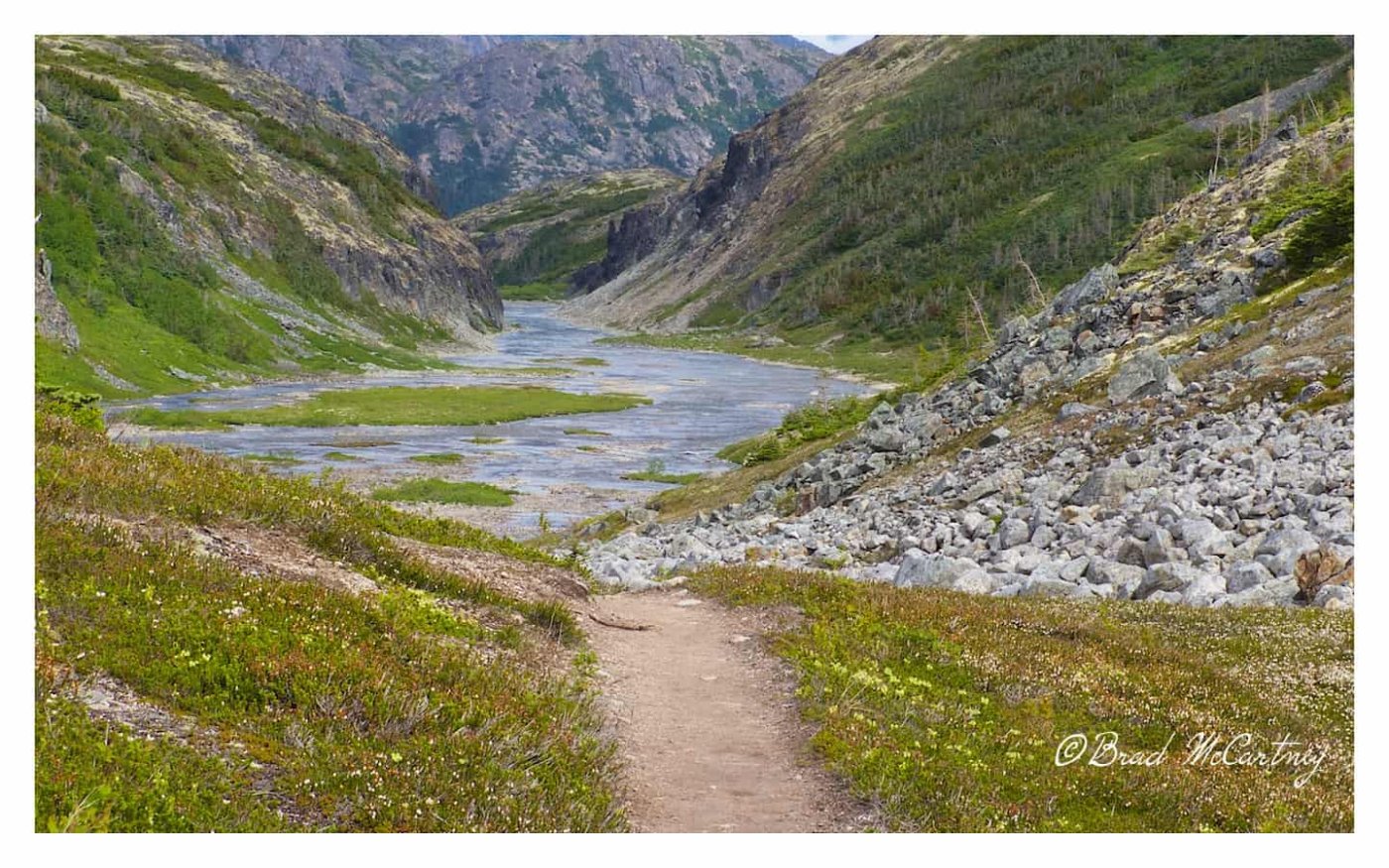 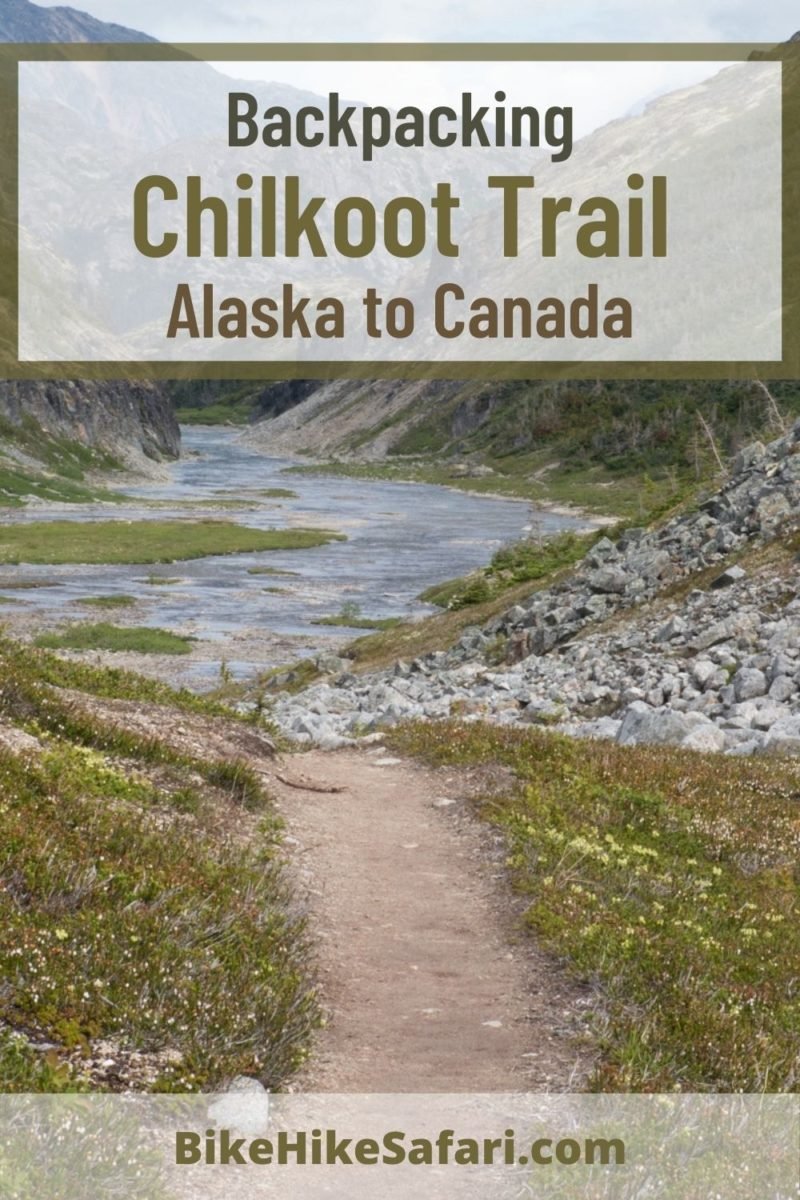 Hiking the Chilkoot Trail is on a lot of peoples to do list, mine included. It is ranked by many as one of the best 100 hiking trails in the world. Certainly it is one of the best backpacking trails in North America. The colourful history and the stunning scenery put this trail on any hikers bucket list. Backpacking the Chilkoot Trail is a must do.

Have you ever read Call of the Wild by Jack London? You should before hiking this trail or canoeing the Yukon River.

History of the Chilkoot Trail

The Chilkoot Trail has the famed history of being the trail that people took to the last of the worlds great gold rushes, ‘The Klondike‘. The trail hit its peak in 1898. More than 22000 people hauled more than a ton of supplies per person over the Chilkoot pass on route to the town of Bennett.

Getting to the Start of the Chilkoot Trail

Before starting the Chilkoot Trail a hiker will need to make the following arrangements.

I arrived in the Alaskan town of Skagway on an overcast windy day. The bus from Whitehorse dropped me off in Skagway at midday. The border crossing between Canada and USA was quick and simple. I had the intention of starting to hike the Chilkoot Trail on the same day but I failed to organise my permit beforehand. Learn from my mistake.

A permit is required as only 50 people per day are allowed to cross the Chilkoot Pass. There is an international border crossing on the Chilkoot Trail, between USA and Canada. I went to the Trail headquarters in Skagway and made a booking. There was still spots available for me. As the weather can play a part in this hike I noted that there was a weather window of a couple of days that should make crossing of the Chilkoot Pass a joy.

I didn’t want to be climbing the pass in bad weather so I needed to hit the good weather that was a couple of days away. The trail ends in Bennett a ghost town with a train station which picks up hikers and takes them off the trail, the train doesn’t run everyday so I had to time the end of my hike with the train schedule to get me back to Whitehorse where the rest of my gear was stored.

I set off from Skagway under windy overcast skies and decided to walk the 15 kilometers from the township to the trail head at Dyer. I only got about 2km down the road before I was picked up by a friendly local.

My plan was to walk to the first campsite from the trail head called Finnegan’s Point Campground. The lift I received from the kind local ensured I made it in short time. The trail followed the Taiya River river. For the most part through lush coastal rainforest filled with Cottonwood, Willow, Spruce and Birch trees. Unusually high rainfall flooded the valley a couple of weeks prior to my trip which caused hikers all manner of discomfort as they trudged through water sometimes waist deep.

By the time I hiked through the area it was only just over ankle deep water that was left on the trail. No use trying to avoid it I just stomped right on through, wet feet and all. At one point the trail weaves through some beaver ponds that flood the low lying area, great job by the trail crew to make that section of the hike manageable.

After the beaver ponds and near my planned campsite at Finnegan’s Point I noted some large bear poo about 400 meters from camp. I camped there alone, all the other hikers continuing to camps further up the trail. I considered doing the same as I only walked such a short distance.

The camp was quiet and peaceful except for the mouse that tried to steal my food when I wasn’t looking.

The following morning I woke to discover that it had been raining overnight. My food was still safely inside the bear proof storage containers which are located at each of the campsites. It drizzled rain on and off most of the day, I didn’t bother about a rain jacket, it was so light.

I wanted to make it to a place called Canyon City which had remnants of the Gold Rush of 1898 but the bridge to the ruins was closed due to damage from the recent floods. I continued to Sheep Camp which is at the base of the Chilkoot Pass. This is a popular campsite. Everybody stays here on the night before attempting the climb over the pass.

During the evening the ranger came to the shelter and chatted about the history of the area and expected weather and conditions for the next day climb over the pass. He stated that there was an expectation of rain in the morning clearing by the afternoon. Sounded fine to me and as a result I planned to sleep in which is not recommended for most people as it can be a 9-11 hour hike to the next campsite on the Canadian side of Chilkoot Pass. I was sure I could do it in much less than that.

Overnight it rained on and off. I woke in the morning and was in no rush to open my eyes and get moving. When I opened the tent to look at the sky above I discovered patches of blue sky amount the clouds. That spurred me into action as that was better than the predicted morning rain.

When I packed my tent and headed to the cooking shelter I discovered that everybody had already left for the pass with the exception of the 4 Alaskan women that I first met at the trail office in Skagway. I filled myself with calories in the form of oats and coffee and set off on the 800 meter climb from camp to the top of the Chilkoot Pass.

The weather was calm and more and more blue sky appeared the further up the trail I went. I passed the spot on the trail where disaster took the lives of at least 70 Klondike Gold Rush Stampeders. It was on 3rd April 1898 when an avalanche tumbled down the mountain shortly after Sheep Camp. Their dreams like many others at the time ended without any gold in their pockets.

It didn’t take long before I reached a place known as ‘The Scales’. So named because the paid help would haul the huge loads to this area for an agreed price per pound. The goods would be re-weighed and prices re-negotiated when the hired help found they were carrying more than they agreed. It was also the last flat area of land to rest and top up on water before the climb up what is called ‘The Golden Staircase’. The final steep climb to Chilkoot Pass and the Canadian border.

Most gold rush seekers during the gold rush climbed this pass with over 1 ton of supplies that would see them through a year in the Klondike. It took most people 3-4 months to complete the hike and as many as 40 trips up the pass. Most climbed the pass in spring time snow in order to make it the Lake Bennett at the end of the trail with enough time to make a boat from whatever timber they could find and get their supplies to Dawson City in the Klondike. What an adventure it must have been then, as it is now.

From the scales the trail moved to a mix of late season snow patches and mixed boulder fields which were all at an angle of near 45 degrees clinging to the slope. I was fortunate to have clear weather, with no wind unlike the climbers a day ahead of me. They suffered through cloud, sleet, rain, slippery rocks and low visibility. One unfortunate hiker slipped on the rocks using her head to break the fall.

I made it to the Chilkoot pass and continued into Canada and a small hut for a rest and warm drink. I was surprised that I was the first person there. It took me just under 2.5 hours to climb to the pass. I was told that the next campsite was only 1 hour away so I planned to keep moving past that camp and onto Lindeman City camp. It was not part of my original plan but I had lots of energy and was moving quite fast over the terrain.

After lunch I descended from the pass to Crater Lake through several patches of icy snow and continued for the rest of the day down the valley. Trees and lakes started to make  appearances when I wasn’t gazing up above at the many hanging glaciers that seem to have only a limited time left before they melt away and become a thing of the past. I was alone at Lindeman Lake camp until a couple arrived around 8.30pm.

The last day was an easy stroll to the end of the trail at Bennett. I ran into Britta a girl I met at the Whitehorse parks office. She was a day ahead of me on the trail.

The train station at Bennett was my ticket off the trail. Historically this was the staging point for the people heading to the Klondike to make their boats and begin the journey on Lake Bennett then onto the Yukon River to Dawson City some 800km away. They waited here until the spring ice melted on the lake. The town was quite big in the day including a church that is still standing.

In 1899 the railway reached this area and few crossed the Chilkoot Pass. Now hikers like myself take to the trail to emulate the Gold Rush seekers of 1898. Now the numbers are much smaller with only around 1500-2500 people a year making the pilgrimage every year. In 1898 there was 22000 people crossing the pass!

For most of the trail I walked alone and reflected on what a journey and adventure the gold seekers had all those many years ago. Most ended with nothing and some found the journey so overwhelming they just packed up and returned from where they came. Some settled and explored the area and became the citizens of The Yukon and Alaska. I have so much more to explore!

Next : Canoeing the Yukon River

12 thoughts on “Hiking the Chilkoot Trail”