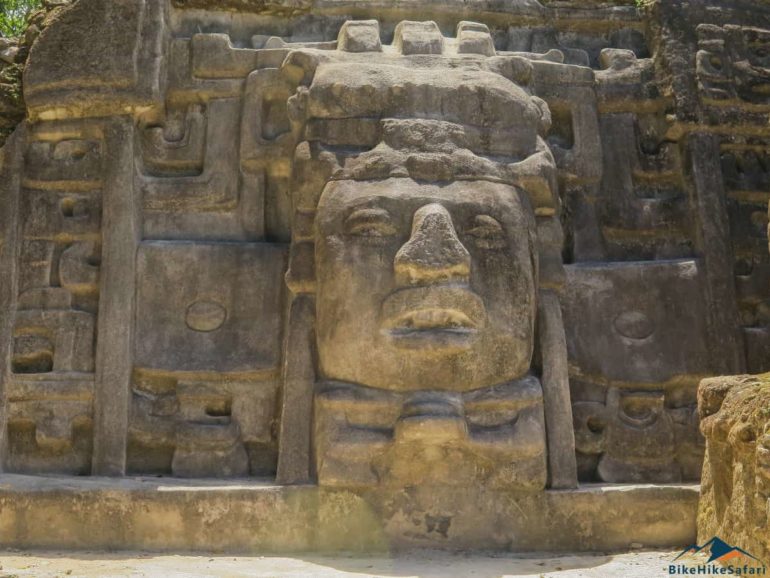 Lamanai Mayan Ruins Belize is one of the main Mayan sites in Belize. I never really considered Belize to be a country to hold such famed ruins. The more time I spent in the country and the more reading I did the more I realised that there is more to Belize than offshore islands and fun in the sun.

Although I didn’t equate Mayan ruins with Belize I had heard about Lamanai long ago. It was one of the sites that I really wanted to visit if I found myself anywhere in that part of the world. So it was that I arrived at the site around 9am after a short snack at the restaurants just outside the site.

Most people arrive at the site via boat after being convinced that the road was too rough to travel on. It makes a great way for tour operators to extract a little bit more money out of tourists. The road was dusty but great, I guess after rain it might be a different story.

There was a birdwatching group at the site as I entered the museum to pay my entry. How did I know they were birdwatchers? They all had binoculars around their necks, cameras with huge (re expensive lenses) and they all wore the same long pants and long sleeved shorts in either khaki, brown or tan or shades of the above. Oh look, it’s the rare Polka Dotted Nitwhit, sorry that’s a birdwatching joke!!

I wandered around the site alone. Lingering as long as I cared at all of the temple sites. I took the time to notice the small things and follow my ears as they would hear rustling in the jungle.

I followed the paths of some rather vicious looking ants. I’m not sure if they are the brutally named ‘Bullet Ants’. Known for their bite that feels like a bullet hitting the victim. So I stayed away from them just to be sure. Coatimundi roamed the site. They are the Racoon looking animals that scavenge their way through the jungle undergrowth. Unlike the bird nerds, I didn’t see anything too exciting in the bird world.

I climbed to the top of the largest main Temple and lingered at the summit. As I sat on the summit I heard the faint sound of branches and leaves moving nearby. A large family of maybe 10 Howler Monkeys were either feeding or sleeping. All within about 10 meters of me. I almost could have jumped onto the nearby branches and joined them. Two of the Howler Monkeys had babies in tow. Crawling all over their mother or exploring the branches.

The Mask Temple is the thing that sets the Lamanai Mayan Ruins Belize apart from other Mayan Ruins. It has two large stone carvings of set into a temple. The shape of the faces are very African in appearance. It’ s not the only ancient North American site that has such things but the only Mayan ruins (that I know). Could be influenced by the Olmecs but I’m not going to go into the ancient history of North America, even though it fascinates me.

As I finished my time at Lamanai I had a quiet conversation with one of the tour guides. I asked where all the tourists were? Why was this site not crowded? He told me that a cruise ship would be visiting the site the next day. That would bring over 1000 people to the site. I’m glad I visited the site today. But I’m also glad that people get an opportunity to visit such a site.

Now it’s time to leave Belize after my short 1 week stay and head to Mexico.