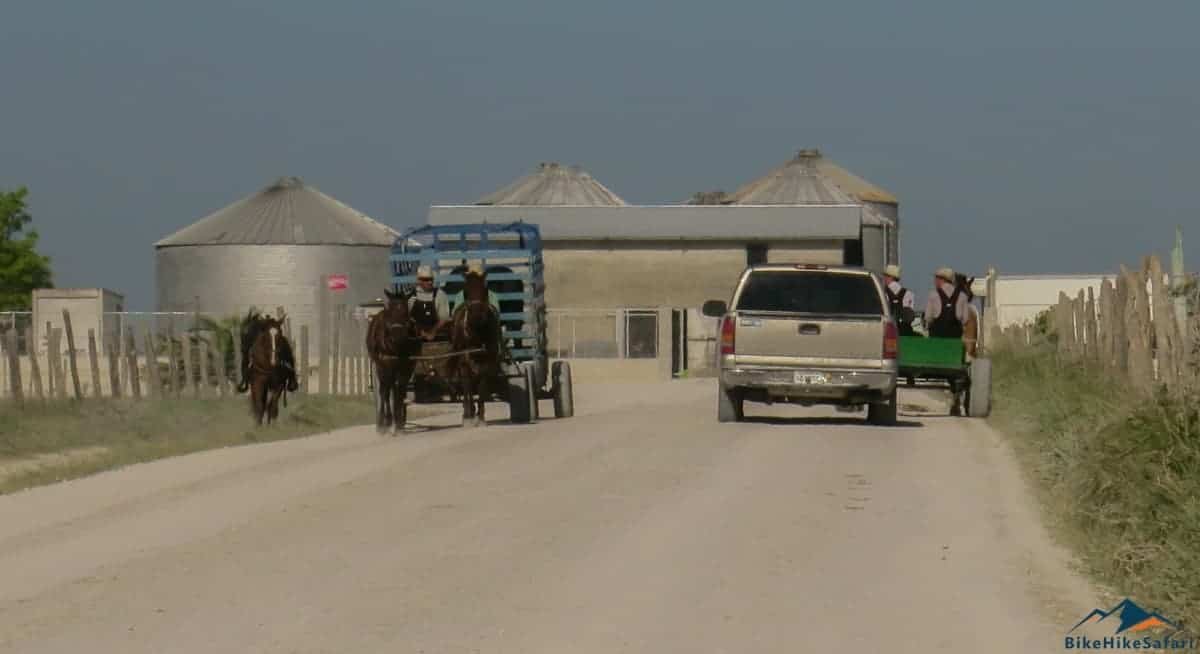 I made a plan to cycle through the remote northwest of Belize. I checked my paper maps, offline maps, Pocket Earth Pro App and Google maps. The route looked great. I’d be cycling through a combination of Ranches, Mennonite Communities and remote jungle. But things didn’t go to plan.

My route out of the town of San Ignacio took me through the Mennonite town of Spanish Lookout. On route I had to cross the Belize River via ferry. I waited on the river bank for what seemed like an extraordinarily long time. The ferry was slow. When I cycled onto the ferry I understood the slow speed. The ferry was cracked by hand, not by a motor. A dude cracked the handle which turned the gears which got us across the river at very slow speed.

Once on the other side a had a ten minute cycle to reach the spread out town of Spanish Lookout. First stop was the diner that served nice burgers at a reasonable price. It seemed to be the meeting place for the local Mennonites. They were all speaking German, at least I think it was German, I could pick up a few words here and there courteous of my poorly learned high school German.

The large general store supplied me some food and water. With all the planning I had done I had little idea if there were any water sources on route. And if it rained I could be stuck in deep mud for an extended period of time, my biggest fear. I bypassed the very famous dairy that serves ice cream to die for. I was stuffed after such a big lunch so gave it a miss.

It wasn’t long before I was cycling through farmland and small rural villages on dusty dirt roads, just what I was looking forward to. After an hour or two of cycling I hit a road junction and followed my GPS on a small road to a locked gate. I checked and double checked my navigation. I was on the right road. It wasn’t long until the attack dog found me, followed by it’s owner. It was the security guard for the Yalbac Ranch.

‘You followed your GPS to get here“, he said

‘We get so many people who do that. Google is wrong, this is private property and you can’t come through. The boss doesn’t let cyclists through“, he said.

I chatted to the security guard for a while. He was a nice enough guy, just doing his job, but there was no way I was getting through the property. I took note of the several discrete security cameras and large sign warning me of private property. I would have to back track.

There was a trail that allowed me to backtrack a bit. A series of small trails that would take me back to the main highway. I was now forced to take the long way around on the busy and at times narrow main highway.

I bypassed the small capital of Belmopan. Although I didn’t go in for a visit I suspect it is very small. So small that I camped on the side of the road only 4 kilometers from the city center in farmland. Try doing that in any capital city anywhere in the world. I was told the capital was moved here from the larger Belize City on the coast due to high number of hurricanes that hit Belize City. An inland capital is much safer.

I cycled the flat, somewhat boring main highways on a weekend. With little wind I was making good time. Road cycling seems popular in Belize. I was passed by several very fast, professional looking cycling teams. Complete with drafting vehicle and support crews. I was fanging along at between 20-30km/h which is super fast for a heavy touring bicycle. They must have been doing 40-50km/h on average. In fact I was traveling so fast I covered one of the largest daily distances of my whole trip, despite taking many hours of rest in the shade.

I stopped at a well known travelers stop called Slim’s Bar and Grill. It served some of the best BBQ Ribs I have ever eaten. It was at this point two other heavily loaded cycle tourers arrived, but they didn’t stop to say hello. As I’ve met less than 10 cyclists in the last 2 years I would have liked some company.

At night I camped close to the industrious farmlands of the Mennonite’s of Shipyard Community. The guys all dress in Black overalls and the girls all where long dresses and hair bonnets. They all speak German and seem to keep to themselves. I received a lot of waves. When I stopped to order a burger for lunch at a small store I got to practice my German. I used all of the 20 words that I know, yes, that’s all I can remember from my high school German lessons.

Tomorrow I will be in the large Mayan ruins of Lamanai, in the Belize Jungle.

Next : Lamanai – Mayan Ruins in Belize