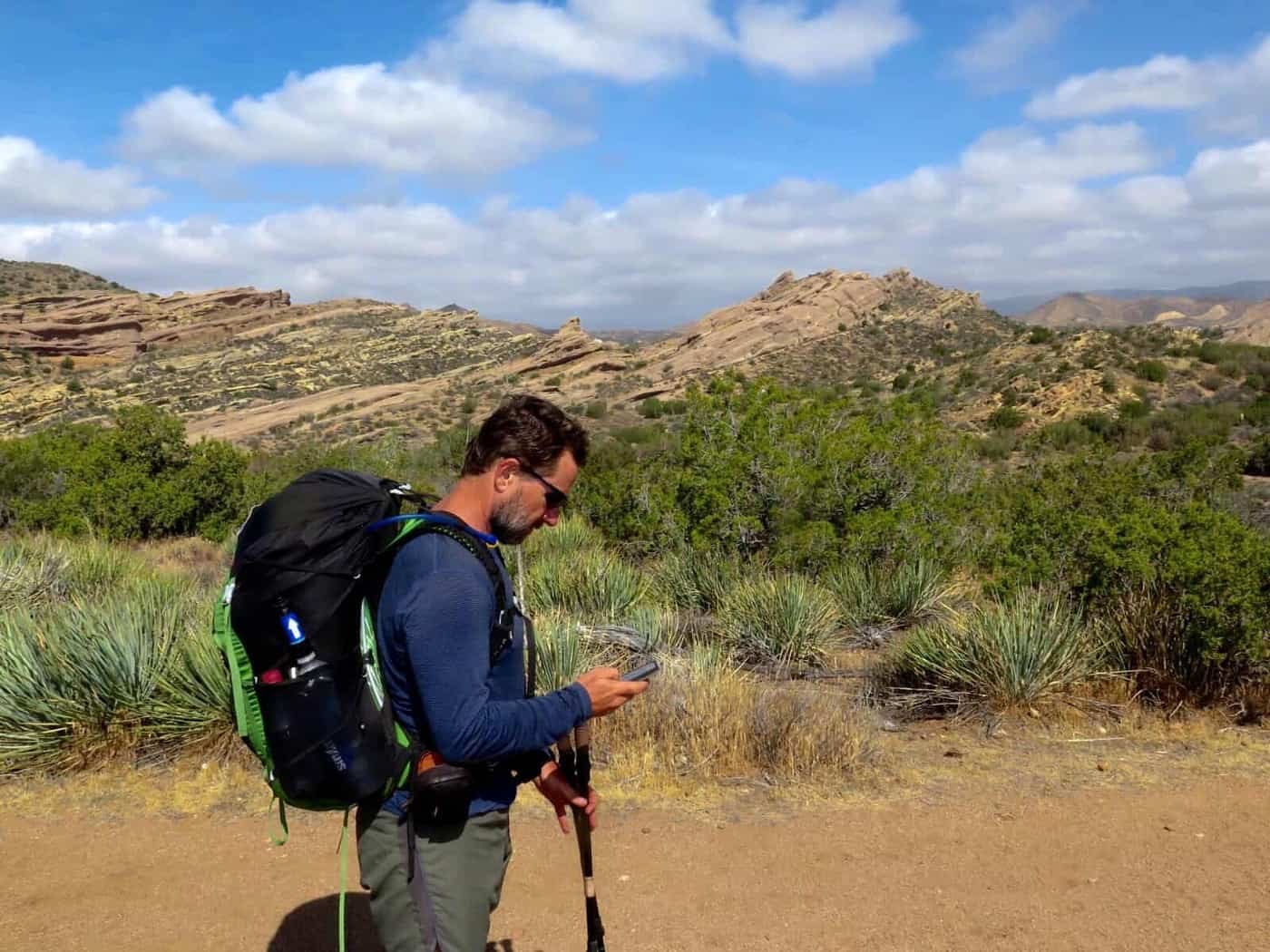 Last night at the KOA RV Park in Acton had the largest amount of hikers in one place that I have yet experienced on the trail. The vast majority of them I had yet to meet.

Possibly 50 hikers camped or passed out on the grassed lawn of the camping area. All good natured and social souls. Some spent many hours of the night laughing and talking. Not that I would have known, by 8.30pm I was intently staring at the back of my eyelids.

Natures alarm clock always seems to wake me at 5.30am, whether I want to or not. I don’t use an alarm clock. Shortly afterwards I hit the trail following Outland, Crunchmaster and Half Slow. We took a wrong turn within the first 1/4 mile. An act that we repeated 3 further times prior to 10.30am. To navigate on the trail I exclusively use my phone. I don’t carry any paper maps.

There is a great app from Guthook that provides satellite maps, topo maps, gps to determine my location, water sources which are updated by people on the trail like me, campsites and much more. Within seconds I can see where I am, how far to the next town or camp or water or other place of interest.

If interested download the free demo on their website and check it out. I wouldn’t give it a plug if I didn’t like it. This app helped us out of our geographical errors in the morning.

When hiking with other hikers I often learn a lot about them in a very short period of time. It’s like speed dating without the dating bit. Actually I’m not sure if that’s correct as I’ve never been on a speed date. I hope you understand what in trying to say! I guess friendships can be struck up very quickly. We are a tight group out here on the trail, I’ve never experienced anything like it. The world would be a better place if everybody just hiked the PCT.

Back to the trail. 10am and I arrived at Vasquez Rocks. Dramatic conglomerate rock formations with caves, canyons and folds of rocks that vary from white to black to red and purple. The San Andreas fault helped sculpt this landscape.

The Vasquez Rocks area has been used in the backdrop of many Hollywood movies and TV series. Ever watched MacGyver? What about Blazing Saddles or the recent Planet of the Apes? Bonanza maybe? Lone Ranger? Even a couple of Star Trek movies. The list goes on. Do a Google search, you might even find more movies that you know that have been filmed there.

Nearly tripped over a snake on the trail, I think it’s a harmless Gopher Snake, maybe somebody can confirm that for me from the photo.

Another mile down the road was the town of Agua Dulce. Eagerly we raced to the cafe to indulge in bacon, eggs, toast, hash browns and coffee. All cafes and places to eat have power outlets to allow us to charge our phones.

Most of us also carry some form of battery that allows us to charge our phones at the end of the day. We also recharge them in towns when time allows. Check out my Lightweight Thru Hiking gear list to see what I’m carrying to do this. Towns also mean grocery stores to replenish the food stores. I have around 100 miles before I reach the next town. That equates to about 5kg of food.

I dislike a heavy pack when I leave town so try and eat the heaviest food as early as possible. Unfortunately the lure of the Pizza called me before I departed town. 4 hours after arriving I rolled out of town carrying a lot of excess weight, mainly inside my stomach.

I had all the best intention of only hiking 5-6 miles them stopping for a relaxing afternoon to sleep off the excess calories consumed but a combination of excessive amounts of energy combined with a lack of flat ground to camp saw me climb over yet another high mountain range. Luckily my knee that had been pestering me in recent days loved the idea of the 4 hour rest in the middle of the day.

Dundee, Hedghog and Treeman also made the late afternoon climb. There were high Sirus clouds in the sky. Usually a sign of bad weather approaching. Normally they appear around 24 hours before a storm front. My weather app confirmed an approaching storm. Looks like more snow and high wind. I might just be far enough north to miss the worst off it. But let’s see what tomorrow brings.

At 7pm I filled the water bottles at the worst water source on the trail to date. 15 minutes later I found the only flat spot to camp. Although I didn’t know it at the time there was a lot to dislike about my campsite. I was still quite high on the trail and right underneath the flight path of planes approaching nearby Los Angeles airport which is only 40 miles away as the crow flies. My earplugs will be put to good use tonight. Camping fail number 3!