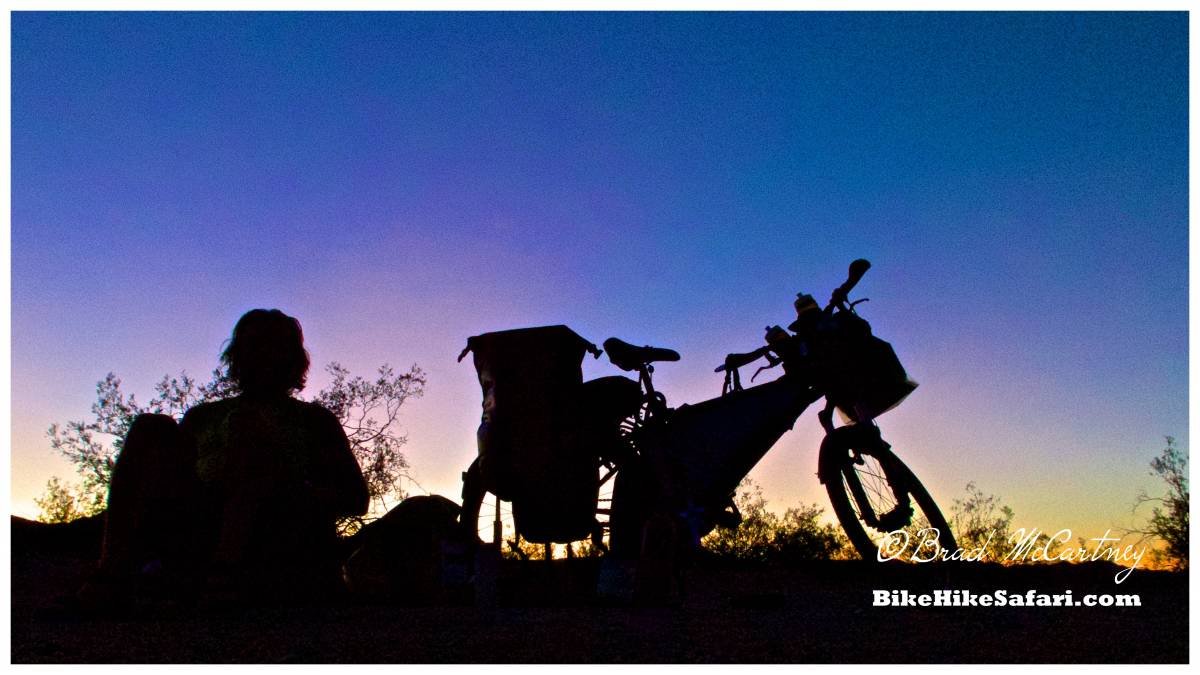 The Mojave Desert is vast, but it is the smallest desert in North America. I planned an ambitious 1000km plus cycle route that would take me through the heart of this wonderland, ending in the City of Sin, Las Vegas. The first part of my journey took me through Death Valley via some huge mountain passes before descending down to the depths of the lowest point on the continent.

I learned that I had been traveling through the Mojave Desert for the most part since I left the high desert of around Mono Lake. The snow and cold weather that caught me during my journey down the Eastern Sierras, didn’t follow me into Death Valley, luckily.

It was warm when I set off from the town of Lone Pine. I left behind the busy roads and masses of tourists. My first night in the wilds saw me camping in a dry creek bed. Normally this is not a good idea but the catchment area for this creek was small and there was definitely no rain in the forecast.

I set up my camp and watched the moon rise over the nearby mountains which hampered my star gazing later in the night. I enjoyed my solitary existence in the desert  sitting outside, watching the stars, moon, satellites and several military jets buzz the skies.

The following morning I continued cycling up mountains. While part way up an F18 jet buzzed within about 100m of me. I caught sight of it in the corner of my eye then boom I was hit with the deep rumbling sound of the jet as it flew by me. Seconds later I heard the swirling winds gust above me which continued for what seemed like 20 seconds. The hair on my body stood to attention. It was quite the exciting experience.

A look at my map revealed several blocks of military land in almost all directions, including the Alien Base of Area 51! That’s for the conspiracy theorists out there! Shortly after being buzzed by the jet I made it to the top of the pass and took out my camera to take a photograph of the Darwin Street signpost, same name as my home town. I managed to time it that the jet returned on another run. Awesome. Would love to have a joy ride in one of them!

I decided to stay for a while to photograph the nearby Joshua Trees which are a strange, grotesque looking tree that thrives in the Mojave Desert within the 400m – 1800m range. I was in the upper range of their limits. Again the jet returned but I decided it was time to move on with a big descent to the Panamint Valley. The descent flowed round fast sweeping corners where I was able to keep up with the cars.

The Panamint Valley and its dry lake took what seemed like an eternity to cross. The dry desert air seems to make all things seem closer than they really were. Part way across a couple of A4 jets flew by completing a series of barrel rolls. They circled and continued to play in the area, causing me to veer off the road on several occasions as my eyes were aimed skyward instead of on the road.

The climb to the top of Townes Pass began. It’s a big pass with over 1000 meters of climbing over 15 kilometers from the Panamint Valley. Part way up the climb a car stopped in front of me while I was huffing and puffing my way up the 10% grade section of the climb. Out jumped Robert and Sabrina, followed by Oliver and Ria.

I have cycled with and camped with them all on several occasions on the Californian coast over the last couple of weeks. Cool people. I was grateful for the coffee and cookies they gave me. They decided to rent a car and see parts of the desert and sierras rather than cycle.

A short time to rest the legs and effect repairs on the bicycles before continuing their journeys into Central America. We chatted for ages. At one stage a Police car pulled up wanting to know if we were OK. The sun was sinking low in the sky by now which enriched the colours of the deserts.

The reds and oranges intensified as did the cooling desert wind. I found a small place for my tent near the road which afforded me incredible views of the Panamint Valley and surrounding mountains. In the distance I could still see the high Sierra mountains with many of the mountains over 4000m.

I climbed the remainder of the Pass the following morning which led me on a long descent that started at over 1500m and ended below sea level at an overpriced campsite at Furnace Creek. The small village was packed with RVs everywhere. Many people were wearing shirts proclaiming their visit to this place which could be purchased in the overpriced local store.

It had little in the way of fresh foods but it did have a self serve Ice Cream machine. I looked at it and wondered, ‘How much Ice Cream can I fit in that small cup’. For the price of $4 I filled the cup with so much Ice Cream that people were either shaking their head at me or taking photos. The cashier didn’t seem bothered that I had about 2 litres of Ice Cream crammed into a small cup that should normally hold about 1/10 of that amount!

It was a pre dawn start for a rather ambitious 174km route through the remote areas of Death Valley. I couldn’t count on seeing other people for the dirt road sections so I carried a total of 14 litres of water. Initially I followed the road that took me to a place called Badwater, the lowest point in Death Valley and in the whole of North America.

At -86 meters below sea level. I lingered only long enough for a short stroll on the Salt pan before having a second breakfast. Then I was off away from the crowds. The heat increased substantially during the day. It was made worse by the extremely dry air that made anything resembling sweat turn to crusty salt in an instant.

I was consuming water faster than I planned. In the distance I could see plumes of dust rise up from the vehicles as they drove along the dirt roads. It reminded me very much of the Road Runner and Coyote cartoons that I so adored watching as a kid.

While watching some of these dust clouds I saw a Band of three Coyotes moseying on up the road in front of me. One of them came within a couple of meters of me. It stopped in the shade. I stopped on the road in the sun.

The Coyote started licking its lips. I grabbed my Bear Spray that I was still carrying. Then I grabbed the camera. My mind again took me to the many scenes of Roadrunner and Coyote. Was the Coyote waiting on the side of the road to receive a delivery from Acme to plot an attack on the Roadrunner! It was by now very hot, in the mid 30s Celcius. Normally I wouldn’t call it hot but with the weather of late being cool my body is very slowly adapting to the coolness.

I completed about 75km before turning off the sealed road onto the dirt road. Initially it was just a slow amble but there were several sections of soft sand that slowed my progress. At times I had to either get off and push or wobble my way through sand, riding in a pattern similar to a drunk trying to ride a bike. The dirt road section was 50km in length. By the half way point I had consumed a huge amount of water that on numerous occasions had me thinking that if this road continued with a lot of soft sand I may struggle with water.

Although there were tracks on the road from previous vehicles it appeared to me that none of the tracks were recent, maybe a day or two old. Despite these thoughts I was on a high from the scenery. As the sun sat low in the sky the desert seemed to intensify its beauty. Eventually I had to stop as it started to get dark. I didn’t want to stop. I was buzzing from the scenery. Again, I settled in to watch the moon and stars till all too quickly the sun appeared again.

On my last day of travel out of Death Valley I made it out to the main road and the town of Baker in quick time. Baker was a disappointment when it came to picking up food supplies for my continuing journey through the Mojave Desert, lots of take away food but nothing fresh. I arrived in Baker with less than 1 litre of water. That’s not much margin of safety. I could have flagged down one of the many vehicles on the road when I eventually made it off the dirt road but luckily I didn’t need to.

Dirt road camp to campsite outside of Baker = 90km

Next : Cycling the Mojave Desert