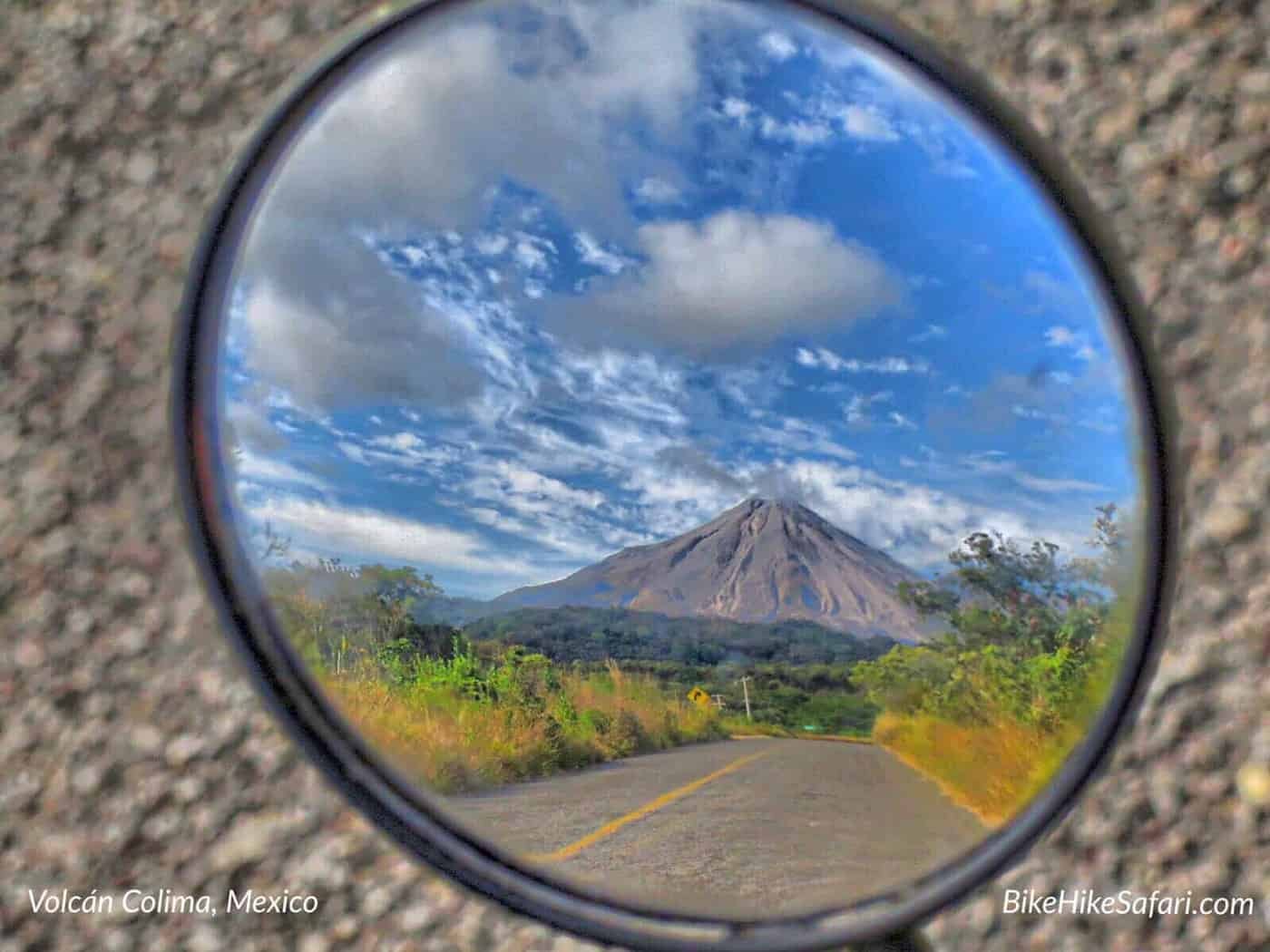 Volcán Colima or Colima volcano is one of the most active volcanoes in the Americas. During my visit it took on an almost humanistic form. That of a chain smoker. Smoke would constantly bellow from the top of its cone. Every hour or so it would clear its congestion with an all mighty cough. Spewing ash and molten rock many kilometers in the sky.

I completed a ride around the volcano which consisted of roads that were either steep uphill or steep downhills. It was exhausting. Witnessing the eruptions were my only distractions for the day, at least 5 of them that I could see.

I spoke with several locals. They all told me I should have been here a couple of weeks ago when it was violently active. Ash fell on many of the surrounding towns. It looked violent enough to me.

The road to Volcán Colima was not easy. From the town of Tequila I headed south and found, to my surprise, a rail trail. An old railway line converted into a cycle path. I followed it, not knowing how far it would go or when it would end. The great thing about rail trails is the lack of any steep grades. I cycled maybe 50km on the rail trail and even stopped for the night part way along in a farmers field.

On route to the town of Tapalpa, the steep backroads were covered in cobblestones and so steep I had to push. It was hard going. The advantage of cobblestone streets is I can cycle at the same speed as cars. A rarity.

Close to Volcán Colima I stopped at the town of Zapotitlán for a second breakfast or first lunch. There was a fiesta in town. It consisted of men on horses, mules or in cars stopping to ask about my travels. Their slurred speech and beer in hand made me question if it was safe to continue cycling. Should I join them and cycle tomorrow or make some distance now. As I couldn’t understand most of them and the waitress at a restaurant thought I might make a good husband I decided to leave.

The state of Colima is the 8th Mexican state I’ve visited. Already I’ve visited Baja California, Baja California Sur, Sinaloa, Chihuahua, Durango, Zacatecas and Jalisco. I wasn’t there for long as it was part of circular route around the volcano.

I made camp in a field of sugar cane 10km from the volcano. I set up my tent and gave myself a quick wash to rid the dirt and sweat I had accumulated. Just as I finished putting my clothes on a guy with a gun appeared. Had he been watching me. I hope not.

I walked towards this stranger with the gun and introduced myself. Daniel was visiting his family who lived across the road from my bushcamp. He lives in Arizona.

‘What are you hunting’, I asked.

‘Yes of course, no problem’, he said.

I spent the night waiting to see if there was an eruption between sleeping. Nothing. Not one explosion that I could hear. Maybe I just slept through them but as I was 10km away I thought I might hear them.

I lingered in camp for a while in the morning hoping to see some action but again there was nothing so I set off. As I descended the terrain started to resemble that of a rainforest. More climbs and descents. Also known as Pointless Ups and DownS or PUDS.

Briefly I stopped in the town of Tuxpan to taste their famous tacos. The owner of the taco stand was curious about my trip. They had not seen touring cyclists before. After hearing my story I received my tacos for a 20% discount, I was gracious.

I camped in a field of Sugar Cane. At 2am I was woken by a flash. I sat upright in my tent, I thought somebody was outside. Bang. Thunder. Within seconds strong wind was buckling and bending the sugar cane all around me. Then the rain started. I cursed not setting the tent up properly. The rain continued all night and most of the next day.

Next : The Lost City of San Paraangaricutiro