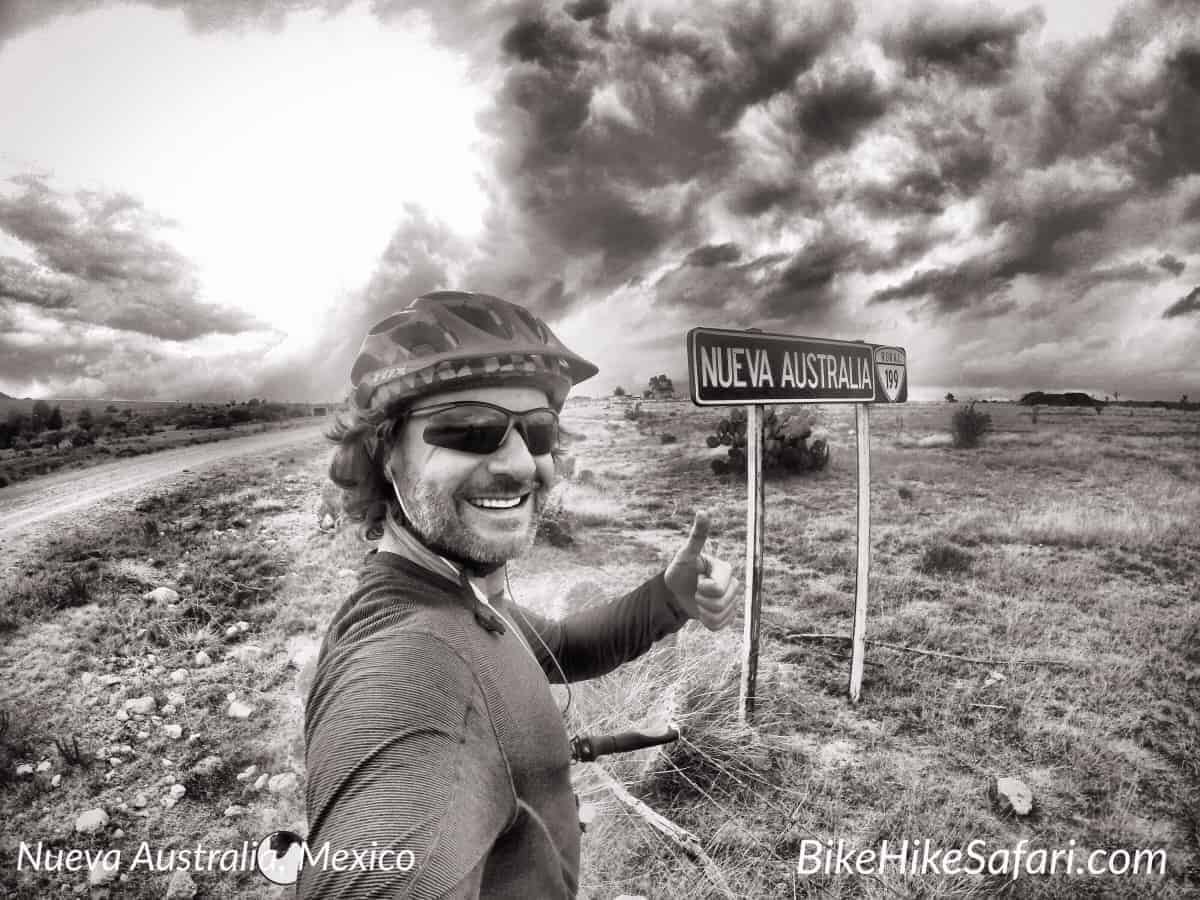 It was hard to leave Zacatecas. The morning rain showers didn’t help. No city in Latin American has touched me in such a positive way as this place. I made good friends, was well rested and comfortable living in the city.

It was less than two hours of cycling before I was onto the dirt backroads. My map indicated a small village called ‘Nueva Australia’. I just had to visit the place. The sky constantly threatened rain. The road was in great condition for a remote dirt road although I’m sure a heavy downpour of rain would have made the going tough.

Nueva Australia was nothing more than a couple houses, mostly abandoned. It looked to me like only one family lived there. Like Australia, this place was the outback, Mexican style.

I camped early. As I set up my tent the skies turned a dark shade of grey. For the rest of the afternoon and evening rain came and went.

My morning destination was the town of Jerez. While having a rest in the early morning a curious family stopped. I fielded the normal flurry of questions and had my photo taken with them. This has happened to me a lot in Mexico, much more so than other places.

Mexicans are curious and proud to show off their country. When they find someone like me exploring the remote areas and equally curious they are compelled to take photos of me. The more I explore Mexico the more I like it.

Jerez has a reputation as a must see if in the area and the weekend farmers markets are highly recommended. It was a weekend. Five tacos from one of the local street vendors filled my stomach and I set about exploring or doing a ‘glory lap’ of town as one other cyclist called it. It was no Zacatecas, the town I shall judge all other towns by.

Boring. That was the way I would describe the road leaving Jerez. Just a means to an end. Boring all the way to the town of Tequila. There were only two highlights, of sorts.

La Quemada is prehistoric site who’s origins are unknown. There’s debate about its purpose and who built it. Archaeologists have determined that it has been there since 300AD up until around 1200AD. It has the classic Meso American ball courts and pyramids founds at most of the well known sites of Mexico and Guatemala. But it’s true reason for being there is now nothing more than speculation.

I reached La Quemada at 4.30pm. It’s closing time is 5pm. The guard explained he would stay open another 30 minutes for me. I raced around the site visiting and photographing what I could in my short time.

I’m interested in ancient cultures. My short time there allowed me no time to learn anything. I couldn’t visit the onsite museum, time did not allow. I walked away none the wiser about the site. I shall not allow this to happen when I visit other sites. Nobody to blame but myself.

Barranca del rio Santiago is a deep canyon I descended into and climbed out of near Mexicos second largest city, Guatalajara. I was unprepared for the fast flowing descent and brutal climb. Tour de France cyclists take note, come and climb this hill as part of your training. It took me around 3 hours to climb out of the canyon. I rewarded myself with an oversize pizza in the outskirts of Guatalajara.

Tequila by name, tequila by nature. Tourists flock to this place which brings out the worst of the tourist industry. Tacky trinkets, child labour selling anything, tacky tours in buses shaped like oak barrels.

I learned that tequila can only be produced in the state of Jalisco to be called tequila. Outside of that state it is called mezcal. Similar to champagne in France or sparkling white wine elsewhere.

I guess my expectations clashed with reality. I’ve spent 10 years of my life in the tourist industry, many of those years running my own business. This is just not how I envision tourism. Suffice to say I didn’t do a tour. I did endulge in a bottle of quality tequila, at least I think I did if the price is commensurate to the quality.

Next : Cycling around Volcán Colima

7 thoughts on “Cycling Zacatecas to Tequila ”