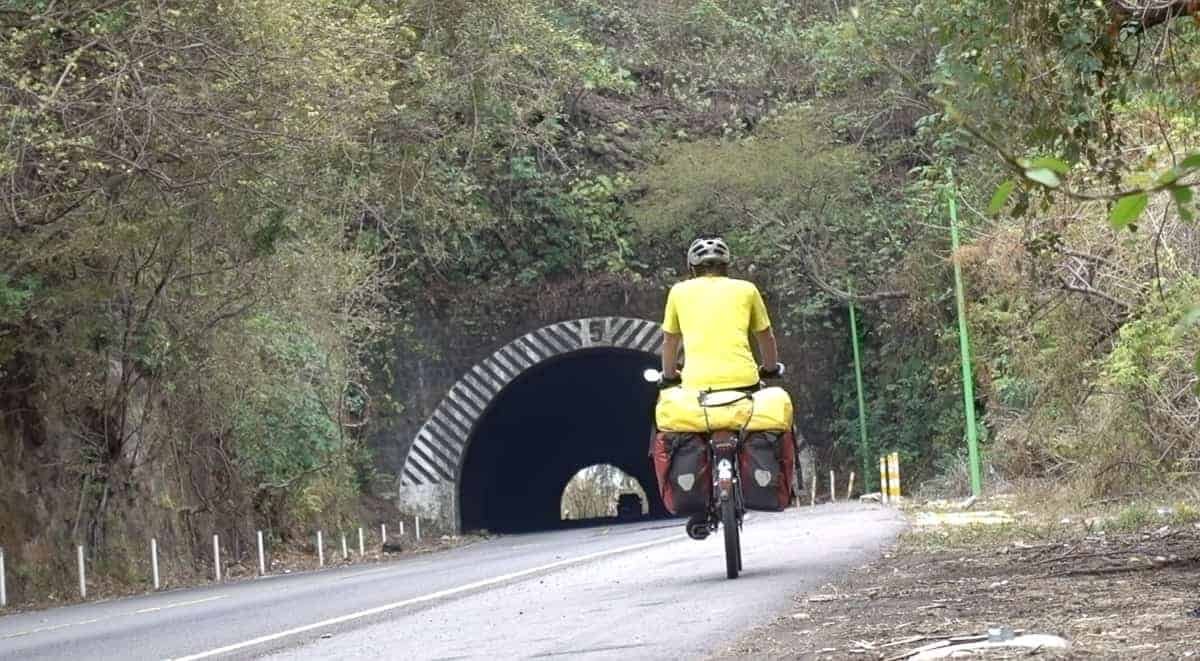 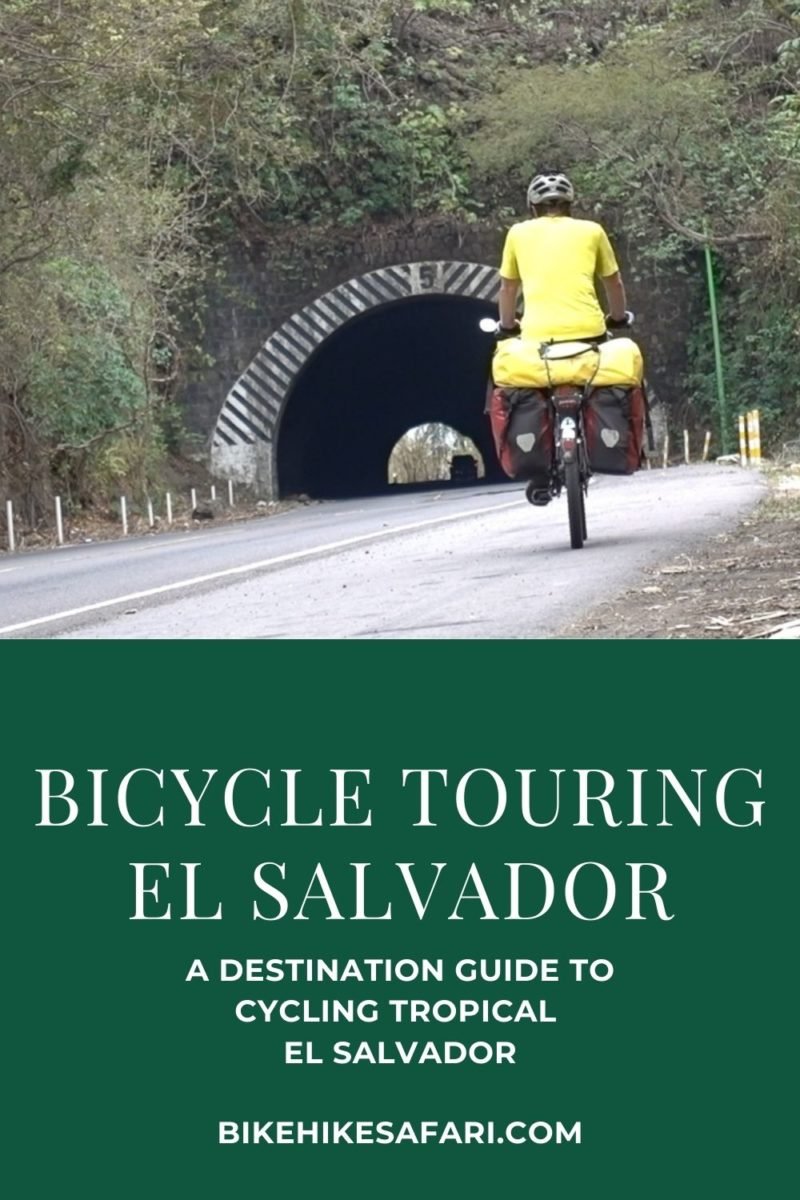 Bicycle touring El Salvador was my next challenge. Crossing international borders are always a time of nervous excitement. Sometimes things are quick, efficient and friendly. Other times they are tedious, overly officious and a cause of great anxiety. Crossing to El Salvador was very much the former.

It was midday when I weaved my way through the traffic jam of trucks at the Guatemala – El Salvador border. Many truck drivers were resigned to the fact they would be waiting for a long time to cross. Many set up hammocks under the trailer to snooze away their time. Crossing an international border with a bicycle is so much easier.

First step was find the Guatemala immigration office to get my exit stamp. With no people waiting in line it took all of 30 seconds to complete. A simple process of saying hello, handing over my passport and with little wasted time an exit stamp was granted. I was on my way.

The next step was to change my Guatemalan money. El Salvador uses US dollars as their only currency. Prior to changing money I always research the offical exchange rate to ensure I’m not ripped off. I always consult xe.com for the best rates, I have their app downloaded on my phone. Most of the time the rate of exchange is negotiable so it pays to be informed.

On this occasion my negotiations with the elderly gentleman took all of 2 minutes before we agreed on a fair exchange. The rate of exchange I got was exactly the same as the official exchange rate. I’m not always able to negotiate such a rate but I lucked out this time.

I entered El Salvador and approached the immigration booth. Like Guatemala had nobody waiting in line. 30 seconds later I had my entry stamp. I was officially in El Salvador. This was by far the easiest border crossing I have done on this trip so far.

Guatemala, El Salvador, Honduras and Nicaragua are part of the Central America 4 or CA-4. These countries have a system that allows access to all counties for a period of 90 days. I entered Guatemala 6 weeks ago so I have about another 6 weeks to exit Nicaragua into Costa Rica.

The main attraction for me in El Salvador were the beaches. Surfers from all around the world know about the waves in El Salvador and secretly hope the rest of the world thinks El Salvador is some sort of unsafe war zone. The truth is El Salvador, for the most part, is a very safe place to travel. Unfortunately, many local people have invested in tourist infrastructure in the hope that tourism would be a big thing in their country. The stigma of the past is still haunting the country.

The tourists from USA are not coming to El Salvador. It is sad to see empty hotels, abandoned restaurants, run down tourist infrastructure and shattered dreams. Tourism could help build the country and raise the levels of the middle class. But false fear is keeping people away.

I didn’t make it too far on my first day in El Salvador. I am now traveling solo. I spent the first night alone in a love motel. These love motels are all over Latin America. Latinos often live with extended family. It can be difficult for a young, or older couple to have some ‘alone time’. Enter, the love motel. They can be rented by the hour, or by the night. They are also a great option for the bicycle tourist. Some can be rather seedy, others are tasteful and often offer alcohol, meals and more.

The love motel had an entrance off the main highway that was private. Anyone outside would be unable to see who was inside. I pushed my bicycle into the private garage. Through a narrow slot in a private door that led to places unknown I handed over the full night rate. Normally most people pay by the hour but they also offer a rate for the whole night. Inside was an oversized bed with mirrors on the ceiling and walls. The sheets on the bed had the ‘just washed’ perfume smell. This place was cleaner than most places I stay. And for the bargain price of $10 per night. I ordered a beer for a dollar, took a shower and slept better and longer than I had in many days.

The following day I got my first glimpse of the Pacific Ocean in over a year. The last time was when I camped on the beaches of Mexico. It seemed, oh so long ago. The coast road cuts it’s way along the often rugged peaks and valleys in a series of steep climbs, cool descents and due to the terrain there are 5 tunnels cut into the countryside. Most tunnels are not too long, the longest is just under 600 meters in length.

Tunnels are not the best things to travel through while bicycle touring, specially if they have an incline which slows the pace of travel. I connected up my front light and turn on my flashing rear taillight to make myself as visible as possible in the dark conditions. While inside the longest tunnel the worst scenario for a cyclists occurred. In front of me was an approaching truck. In my rearview mirror was another approaching truck. I was confident that I was visible to both vehicles. The tunnels are not very wide and there is little in the way of shoulder. I pulled over as far as I could and stopped riding to allow the trucks to safely pass me. There was not a lot of room to spare.

The 5 tunnels were the first I’d ridden through for several years. The last time was all the way back in Oregon, USA, on highway 1 while riding south in USA oh so long ago.

I pulled into the beach town of Mizata and made my way to a hostel that allowed camping. I had heard of this place a long time ago via the cycle touring community. Unfortunately, I found out that it had recently closed its doors. Another example of how the promise of tourism is hurting the communities. I went to a nearby restaurant that rented rooms and settled in for what I hoped would be a day of rest the following day. Diarrhoea set in and with it my energy disappeared. I was unable to trust walking on the beach for fear of soiling myself. My one day of rest turned into three.

The day before arriving I drank water from a roadside restaurant. Normally that sort of thing is not a problem but it was the only time it could have happened. I considered taking antibiotics but wanted my immune system to do its thing and build up its immunity. After three days I felt only a little bit better. Despite not being 100%, I set off.  I considered only cycling another 10-20km to another beachside town but I thought I was well enough to keep going further. Added to that I didn’t really like the towns I was passing. I should have stayed where I was and explored the area, I liked the unpretentious town of Mizata.

Bicycle Touring El Salvador means dealing with extreme heat for most of the year, it can be oppressive. Always in the 40s (Over 100F) near the coast. Many enterprising locals set up outside their houses selling drinks to passing motorists. I stopped at several of these throughout the day. While it was nice to have a cold coke or fruit juice, I noticed that most of the locals bought only beer.

I sat on my plastic chair resting and hydrating as I watched several people on motorcycles come and go. It was the same routine for each of them. They would stop. Chug down 1 or 2 beers then jump back on the motorbikes. The profits from selling the beer meant that the enterprising locals could drink all their profits in the way of beer. A lot of the drink sellers were either drunk or half way there. I quickly learned that El Salvador was a country of beer drinking drunk drivers. From then on, I was very careful as I cycled through El Salvador.

The diarrhoea returned and got worse over the coming days. The very high temperatures, over 40C in the shade, much higher in the sun, made cycling difficult. Have you ever cycled in 47C (116F) heat?

My watery diarrhoea had me stopping often and I was unable to rehydrate quick enough in the oppressive temperatures. I stopped sweating. I pulled into a gas station and sat in the air conditioning for over an hour. During that time I must have drank around 4 litres of fluids. I was unable to cycle any further and found yet another air conditioned love motel for the night.

I was near the Honduras border and considered taking a rest day. Instead I saddled up before sunrise and made a run for the Honduras border before the sun had risen. My time in El Salvador was at an end. Ahead lay Honduras. How would I get through this country with my failing health. Only time would tell.