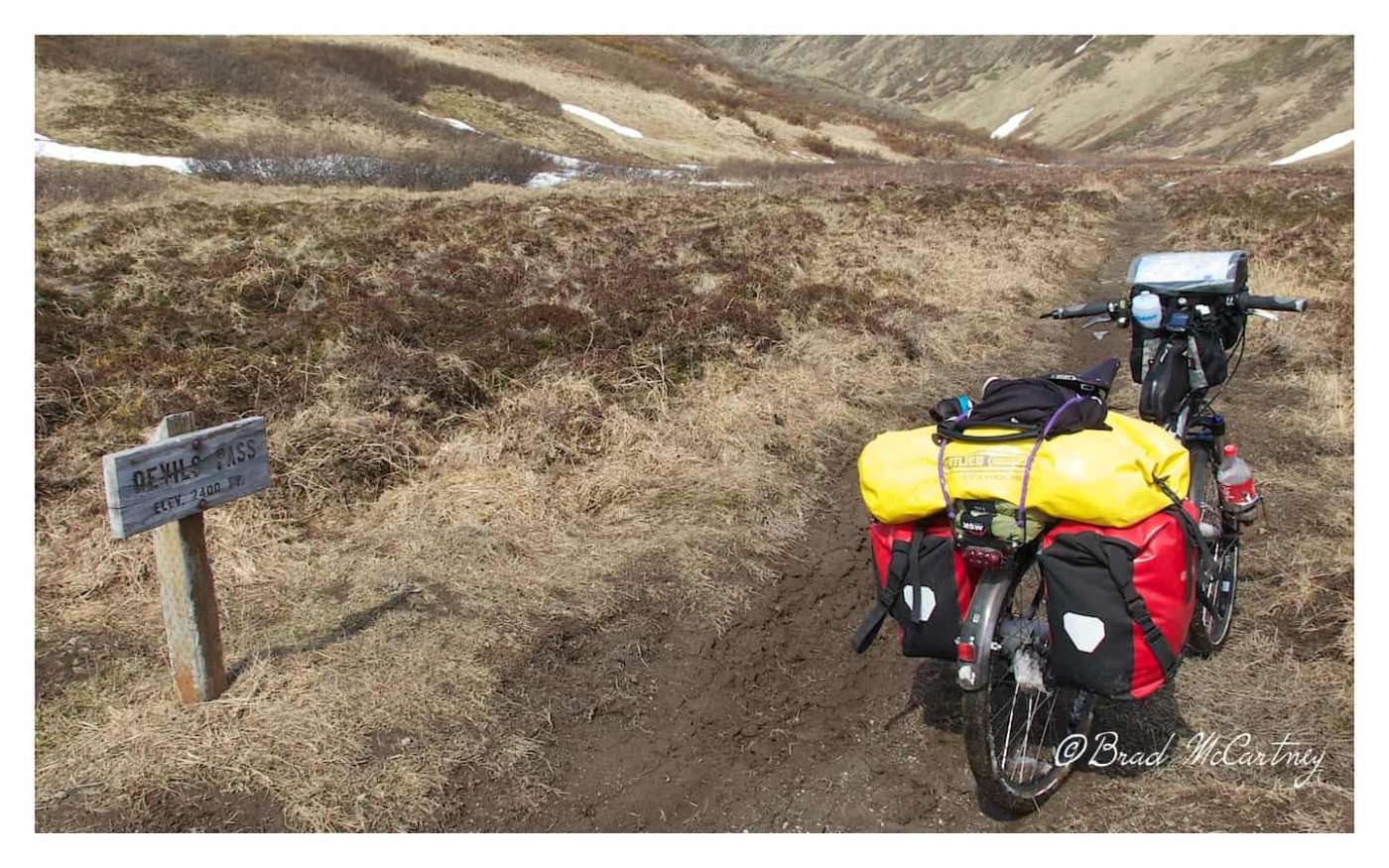 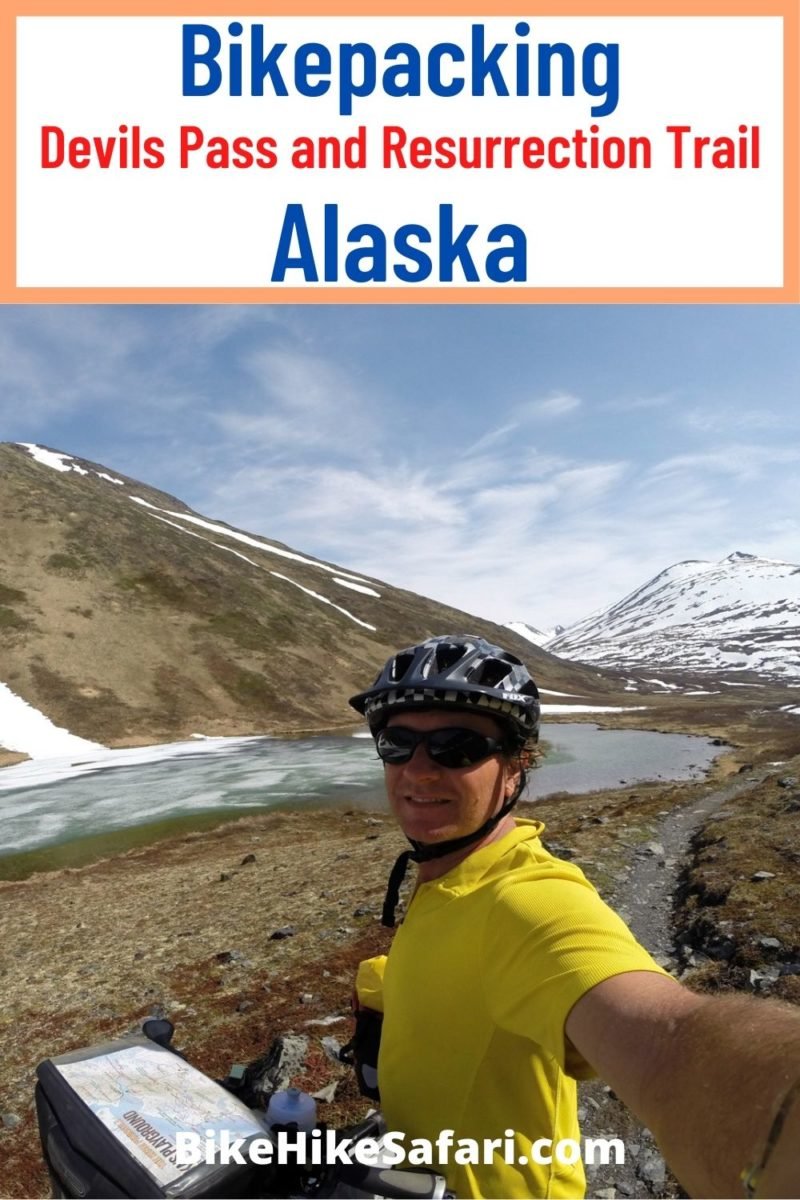 Anybody keen on Bikepacking Alaska has heard of Devils Pass Trail and Resurrection Pass Trail. I decided to link them together and have some off road fun on one of the great bikepacking routes in Alaska.

I cycled from my overnight camp on Turnagain Arm to the start of the Devils Pass Trail on Kenai Peninsula. It was late in the day when I hit the trailhead so I cycled to the first campsite 2 miles in. I was alone in the campground and judging by the lack of people who registered with the sign on book there were not many people to be seen on the trail, it was very early in the season.

The campsite had a Bear proof storage box which is basically a large, heavy steel container with a handle that is difficult for animals to access. Which is reassuring because I have just arrived in Alaska and every sound in the bush is perceived in my brain as a Bear. Around sunset (10.30pm) a rockfall about 100m from the camp scared the crap out of me and the subsequent adrenaline dump kept me awake until the nerves had calmed.

Next morning I set off up the trail to the pass. Very early on I realised that I was lacking in energy. Just feeling flat. The Devils pass trail is known as a great biking and hiking trail but not too many people take it on with a loaded touring bike. Sure my gear is lighter than most cycle tourists that travel to Alaska but early on I was pushing the bike up the steep sections.

The trail gained about 300m in elevation from my overnight camp until I hit the first of many snowy patches. It was close to midday and the extraordinarily warm weather was turning the snow to soft slush which often had me knee deep and struggling to haul the bike through.

The hauling and rough riding resulted in a broken seat. Yes, my Brooks saddle that had taken months to mould to the shape of my rear end broke. The worst thing about that was the seat post was now sticking straight into the place ‘where the sun don’t shine’. Not comfortable to sit down while riding. Suffice to say I spent a lot of time riding while in the standing position!

The views kept me well motivated but I was traveling so slowly, constantly stopping and gazing at the alpine slopes. I wanted to spend a week here, hiking the mountain ridges, cycling the mountain passes and generally exploring the area. I was well impressed.

At Devils Pass the lake (Devil Lake) was almost thawed and apart from a couple of snow patches it was great riding. I was still traveling slow, stopping so often to take in the views. After Devil Lake the track joins Resurrection Pass Trail which would take me to the highway town of Cooper Landing.

From the trail junction the mud began. Even though I was going downhill I walked the bike through the worst of the mud. I didn’t want to be the guy who created deep wheel ruts when the mud drys out for everybody else to curse at. Sorry guys and girls!

The soft mud also revealed that although there weren’t many people here there was a plethora of animals. Some tracks were obvious, Brown Bear. But there were others. Maybe Moose. Caribou, Wolf, Coyote, Fox and many more.

The mud continued and continued until just past the last campsite before the end of the trail. I enjoyed a couple of miles of awesome single trail. Although my touring bike was loaded it was tracking well on the fast sweeping trail.

Unfortunately I was a couple of weeks too early to take full advantage of the trail and had to push more than would be normal on a snow and mud free track. But my experiences will last me a lifetime.

It was late afternoon when I reached Copper Crossing so I found a campsite for a couple of hours. Early next morning I set off for Seward and along the way was greeted by a Porcupine and a Moose on the side of the road, cycling opens the senses to see, hear and smell more of Alaska. It would be easy to spend a whole summer just biking and hiking this area.

Seward has an amazing bicycle shop inside an old railway car. I had to visit them to replace my broken seat. The only casualty of the trip thus far.

Next : Exit Glacier then and now