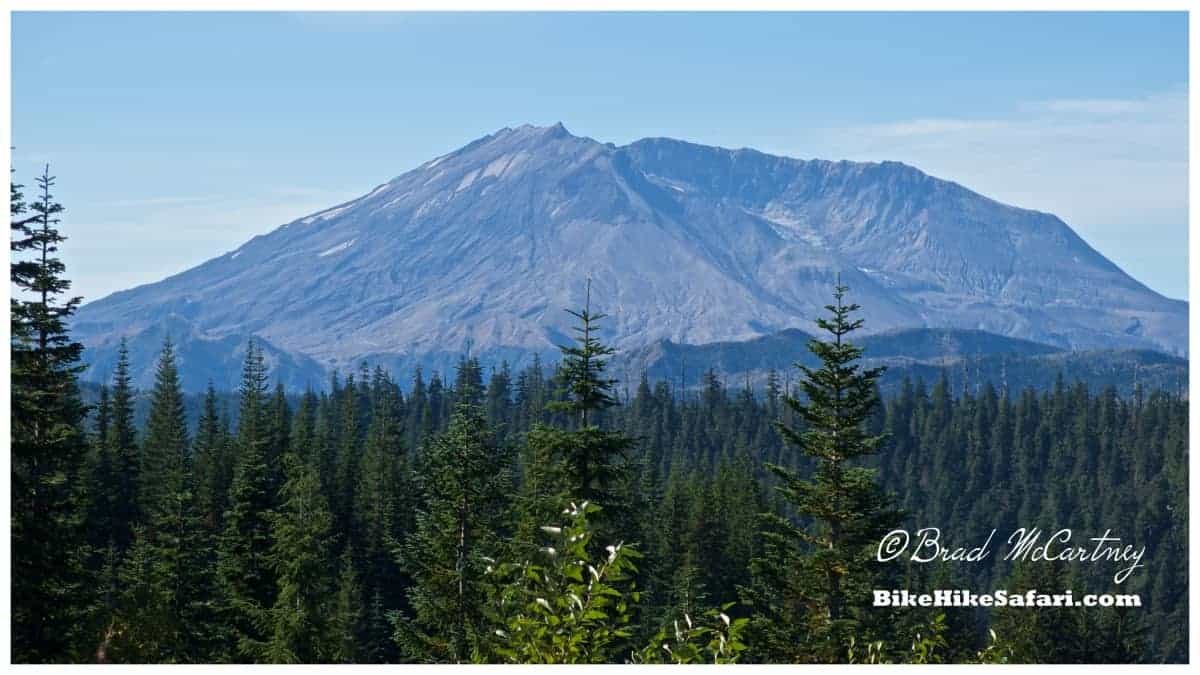 I had heard about what happened at Mt St Helens on 17th May 1980 and watched many natural history documentaries on the explosive volcanic eruption. I was in the area and just had to visit the scene of devastation.

With such a small weather window I set off early in the morning from the campsite in the town of Randle. The fog was hanging low in the sky and people were still sleeping. I was still a bit fatigued from the long day yesterday cycling and hiking at Mt Rainier.

An hour after starting I had cycled above the low cloud. I was pleased to see the Blue sky above and no wind so I was optimistic it would stay that way as I slowly but surely kept climbing and climbing towards Mt St Helens. It was late morning when I reached the turn off to Windy Ridge. Then came the climb. It was only about 8km but it was a long 8km of steep climbing. After I’d climbed the hardest sections it started to resemble a more rideable road with slight uphills and downhills mixed in with stunning mountain scenery. Part of me wishes I explored some of the Mt St Helens Bikepacking trails in the area but the main road would do for now.

Mt St Helens was now in view. I had stopped to see some photos taken at the time of the last catastrophic eruption on 17th May 1980. The top 400m of the volcano was blown away and the stereotypical conical shape altered. I can’t imagine what it must have been like to witness such a volcanic eruption. As I cycled closer to Windy Ridge viewing area I started to see large trees blown over from the blast. Some trees were blown over and some remain but none survived. The whole landscape in the surrounding area is dominated by the dead trees and the new trees struggling to take hold.

At midday I reached Windy Ridge just a couple of kilometers from the mountain. I climbed up the short nearby hill for a better look at the surrounding. I could see many other volcanic mountains such as Mt Rainier behind me, Mt Adams to my left, Mt Hood on the left of Mt St Helens and the lake below Mt St Helens was still, after all this time choked with fallen timber from the blast.

After spending a couple of hours taking in the views and contemplating the area I set off to the campsite near Swift Lake. Turned out it was a big day, I’d ascended 2295m by bike. That’s a lot of climbing, no wonder I was tired by the end of the day.

The following morning I set off for the Columbia River Gorge which was my last night before making it to Portland, Oregon for some days of rest.

I must say that I was very impressed with the route I had chosen through Washington, much better than the normal route that cyclists take through the coastal regions. I am a bit tired though!