Calakmul Ruins – The largest Mayan site on the Yucatan Peninsula 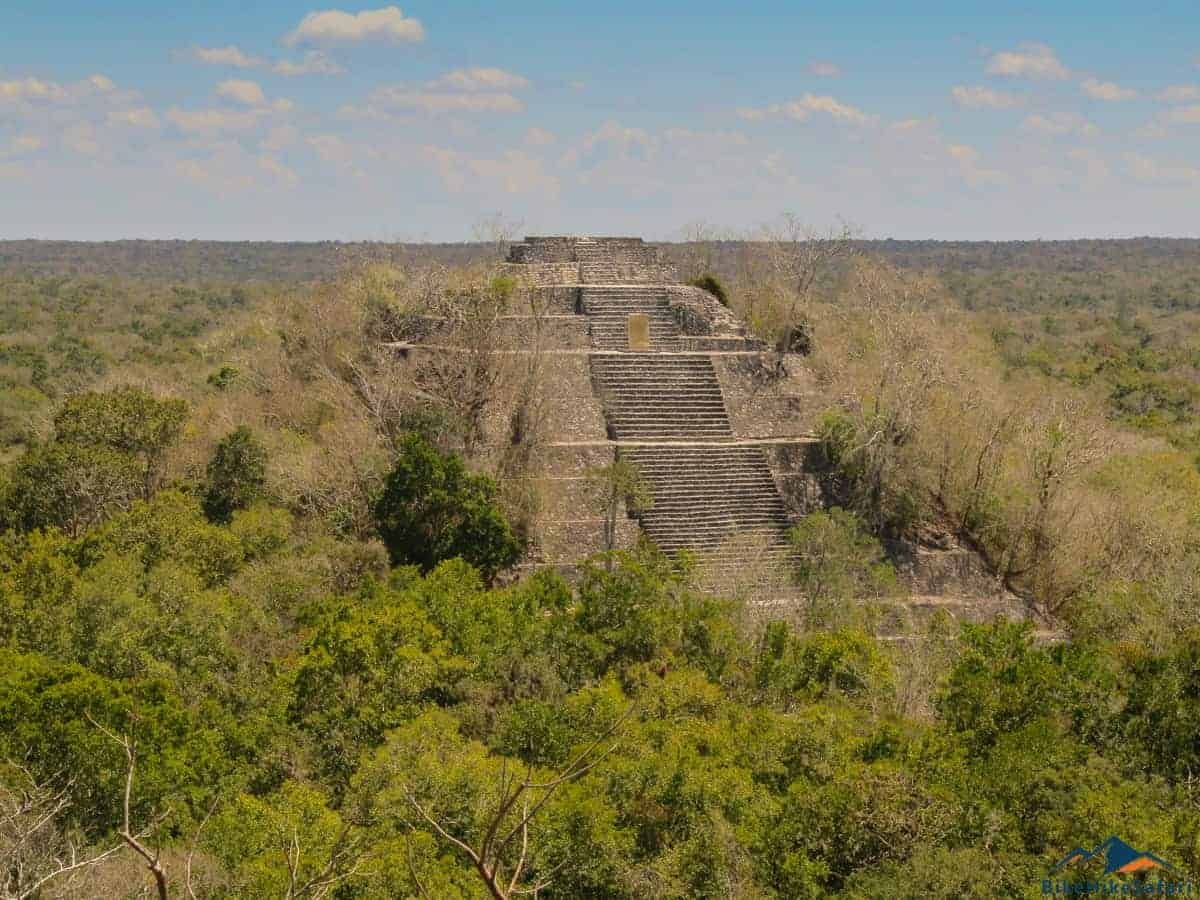 Not too many people know that the ancient site of Calakmul Ruins on the Yucatan Peninsula is one of the most extensive ruins in all of the Americas. Have you ever heard of it before? Over 6500 buildings and an estimated population at it’s peak of over 50000 Mayans.

It also had a deep rivalry with it’s neighbour Tikal. Kind of like an ancient version of Australia vs New Zealand in Rugby, Calgary and Edmonton in Ice Hockey or Prost and Senna in Formula 1. War was common between both of them.

Calakmul Ruins presented me with some logistical problems. It is a 60km one way trip to Calakmul with no camping at the site. So for me it meant cycling about 120km to the site and back in a day, plus I needed enough time to wander around and truly enjoy the experience. I would need to hike about 6km to get a good look at the site and I wanted to climb a few of the pyramids. It was possible but it would be a big day for me.

I cycled the first 7km of the 60km road to a commercial campsite. Nearby I spied a hidden bit of flat ground out of sight so I stayed there for free. I just can’t help myself, besides, I’m starting to run short of money so need to find savings where I can.

I was up pre dawn and cycling as the sun was rising which was surprisingly cool considering the ridiculous daytime temps I had been experiencing. I reached a checkpoint to pay yet another entry fee. The poor guys at the entry gate were all confused.

They didn’t know if bicycles were allowed. Apparently they hadn’t seen a bicycle heading to the site before. They looked on the back of the bicycle and questioned why I didn’t have a license plate. They thought I was on a motorbike for a short period.

There were a couple of minutes of confused conversation between myself and the two gate staff. Eventually I paid my entry and was on my way. Not long afterwards I almost ran into a Javelina which is a native Pig which was grazing on the side of the road. It didn’t know which way to run and headed straight for me until it stopped and turned to run in the opposite direction. It was hard to take a photo as it hid among the undergrowth.

By 9am I had a flat tyre. It was a nice slash in the tyre tube. I use this stuff called Slime Tyre Sealant inside my tubes. It is a green coloured goo that seeks out and patches a hole from the inside out. It works great for small holes but not for large tears in the tubes. The goo leaked everywhere and the hole was too big to be repaired. I put in a new tube and was on my way. Which reminds me I need to buy some more Slime next time I find some.

With the extended breaks due to bureaucracy, wildlife and flat tyres it was 11am when I reached Calakmul Ruins and put on my backpack to explore.  I planned a 6km circuit which took in all of the main sites and several of the lesser visited sites. This place is rather extensive, kinda like Tikal minus the crowds.

There are several mapped circuits to take, all marked on the maps. I took the largest of the circuits, a total of about 6km of hiking. The first couple of ruins were not too special, mainly residential type buildings. It wasn’t long till I reached the one of the many plazas of Calakmul, then the famed Pyramids with the exotic names of Pyramid number 1,2 and 6. There were many others but these were the main ones.

I climbed all of these pyramids which held commanding views in all directions. I looked to the south and imagined that I could see the main Pyramid at El Mirador which is only about 40km away in Guatemala. But I could not see it.

Despite El Mirador being so close it had been deserted for over 200 years before Calakmul came into existence. It has been said that environmental factors were the main cause of the demise of the Mayans. Water or lack of it was an obvious main cause but the pros are still debating all the causes. Learn from the past people!!!!

Next : The Heat is hot in Campeche