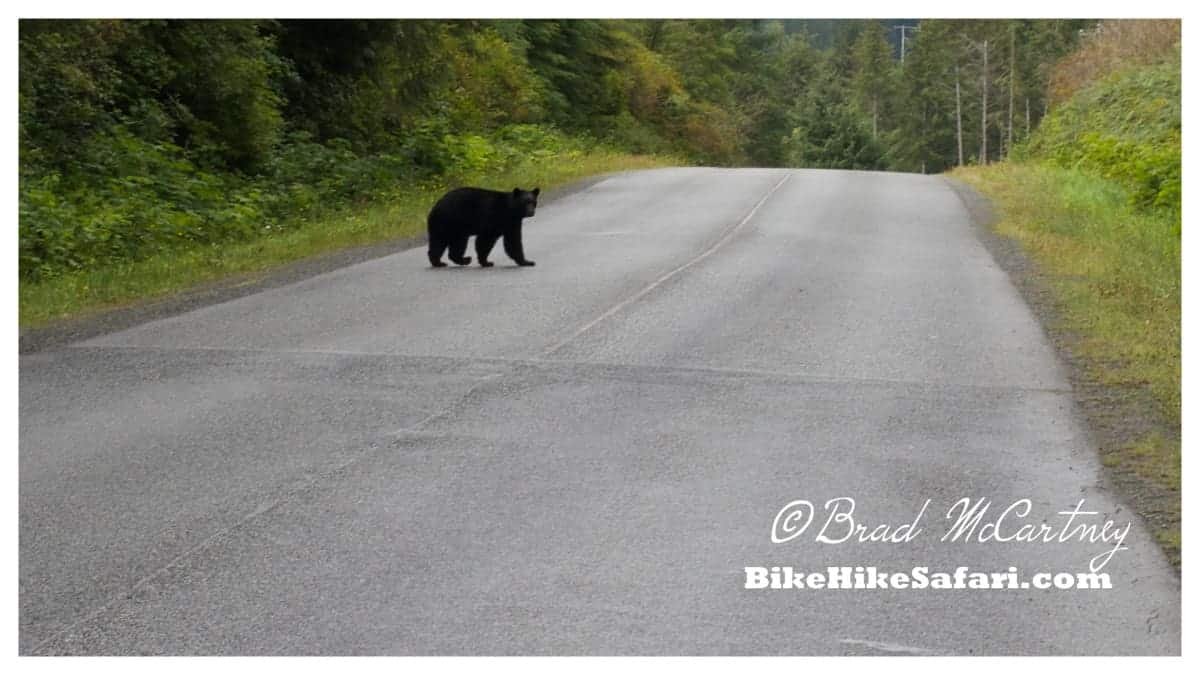 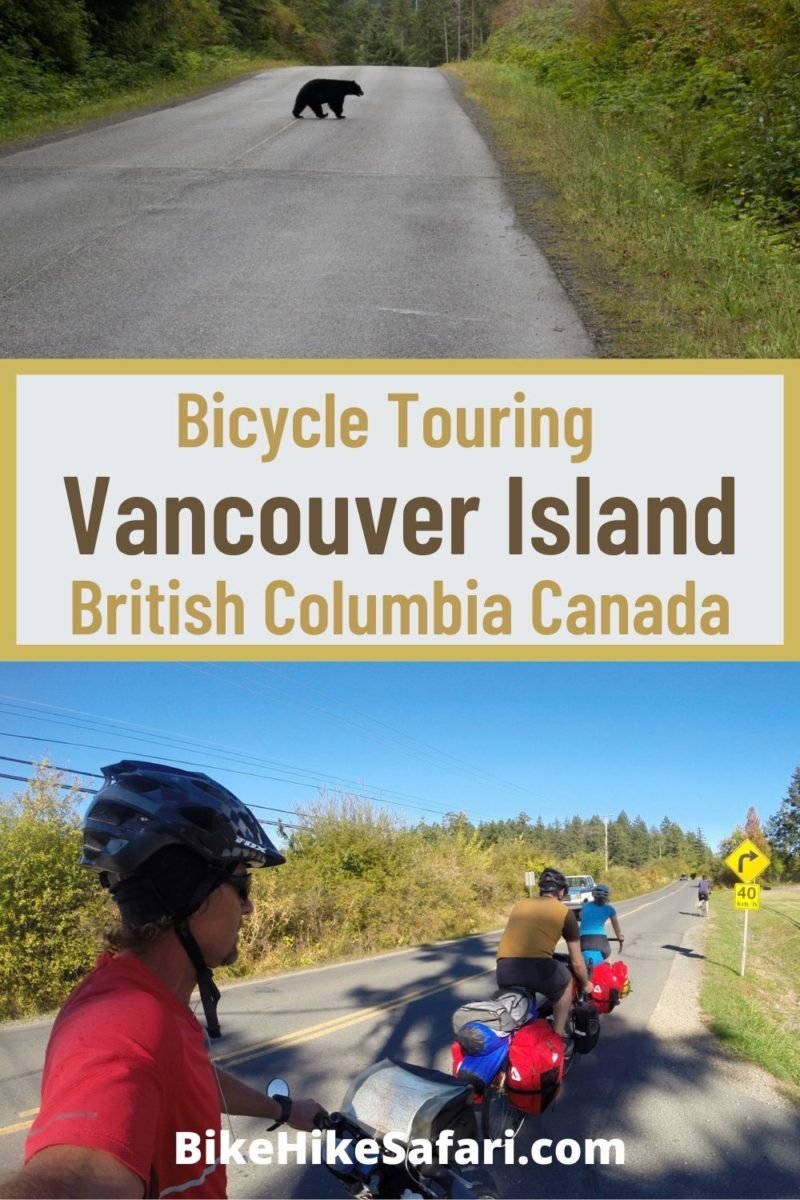 Cycling out of Telegraph Cove with a threat of yet more rain a curious Black Bear stops in front of me on the road to check me out. It’s not the first time this has happened. In fact its happened so often now it common place. I do the usual photo session and it aimlessly wanders off the road. Just another day Cycling Vancouver Island.

I was recently told that the Bears on Vancouver Island either don’t hibernate or have a very short hibernation for weeks instead of months like their mainland cousins. The mild climate and abundant food seems to be the reason. A couple of kilometers later a Deer calmly strolls along the side of the road. Life seems quite chilled on while cycling Vancouver Island. I saw several more chilled out Deer during the afternoon before the skies opened up with yet another deluge of rain.

Fortunately I was watching the rain from the inside a Bar in the small town off Woss eating Beef Teriyaki and drinking a beer. I had no sooner walked in the door than the rain started. I doubled the population at the Bar that evening, surprising really as the meal was so nice, but it was a Sunday. With the light fading fast I set off into the rain and made it only a couple of kilometers before deciding that I should stop at the nearby Rest Area and set up camp for the night.

The following morning was yet more rain and the wind started to pick up. The only thing to look forward to was the tailwind. Within an hour I was soaked. Not one part of me was dry. My Goretex seemed neither waterproof nor breathable. I soldiered on through the rain until mid afternoon when I decided it was time to put up the tent, get out of the wet clothes and warm up. I found it hard on this day.

The weather has been consistently bad for weeks and I don’t always have somewhere to hide. While I was warm and dry in the tent it seemed the weather was starting to get to me. All I could do was have a good sleep and make it to the more populated parts of the Island to enjoy dry places to eat, sleep and rest. I camped in a picnic ground right next to the ‘no camping’ sign. I was done and not planning on moving.

I woke to a surprise. Clear weather. I should have known it was clear because I woke in the middle of the night very cold. No clouds to act as an insulation blanket. Any heat from the day was lost to the atmosphere. It didn’t take long and I was in the town of Campbell River. I stopped long enough to get food and water before continuing in the great weather. Best weather I’ve seen in a long time and a tailwind, is this real!

By the time the sun was setting I found myself on Denman Island drinking a beer given to me by some fellow campers. There was another cyclist in the campground, Erin, we chatted for several hours while looking up at something I haven’t really seen much in recent months, the stars. Amazing how the change in weather picked up my mood.

Denman Island is small so it didn’t take me long to cycle round the Island and take the ferry back to Vancouver Island and continue to Parksville. There were lots of cyclists and cycle tourers on the road heading in the opposite direction. I did catch up to cyclists James and Laetitia, I met them several days ago when we camped together on Alert Bay. Great to see them again. Meetings and friendships are sometimes way too short while in the road.

More sunshine and a tailwind greeted me on a rather chilly morning as I raced down the road, into and out of the rather large urban sprawl that is Nanaimo and onto Salt Spring Island. There were 3 cyclists waiting for the ferry. Julian, David and Patrice.

We chatted and cycled together across the Island to another ferry that would take us to Sidney and a campsite for the night. Somebody suggested Pizzas and beers in town. On the way back to camp later that night we road through a Police Breath Test station, we were the only ones not pulled over and tested. Not that it would have been a problem, of course.

From Sidney it would be my last day of cycling Vancouver Island, Canada. Following the cycle trail that links Sidney with Victoria I sped along the path which slowly picked up the number of hikers and cyclists the closer I got to Victoria. At one point a group of about 6 lycra clad cyclists on their carbon fibre bikes went past. For some reason it felt like they were a red rag and I was a bull. I tried to chase them down.

I sped along at 35km/h just close enough to them to take advantage of the wind assistance as they dragged me along. Several times they looked around as if to say, ‘what the hell is a guy with all that gear doing so close to us’.

After about 5 kilometers I was done but it felt great to get a real hard work out on this short last ride in Canada. I never though it was possible to ride a loaded touring bike so fast. That changed my reality of what is possible. I have enjoyed cycling Vancouver Island.

Made it Elyse and Tim’s house in Victoria to base myself for a while as I explored the area on foot. I learned that if you go to Victoria and drink at a bar called ‘Big Bad Johns’ it can get messy. Very messy!

Next : Hiking the West Coast Trail