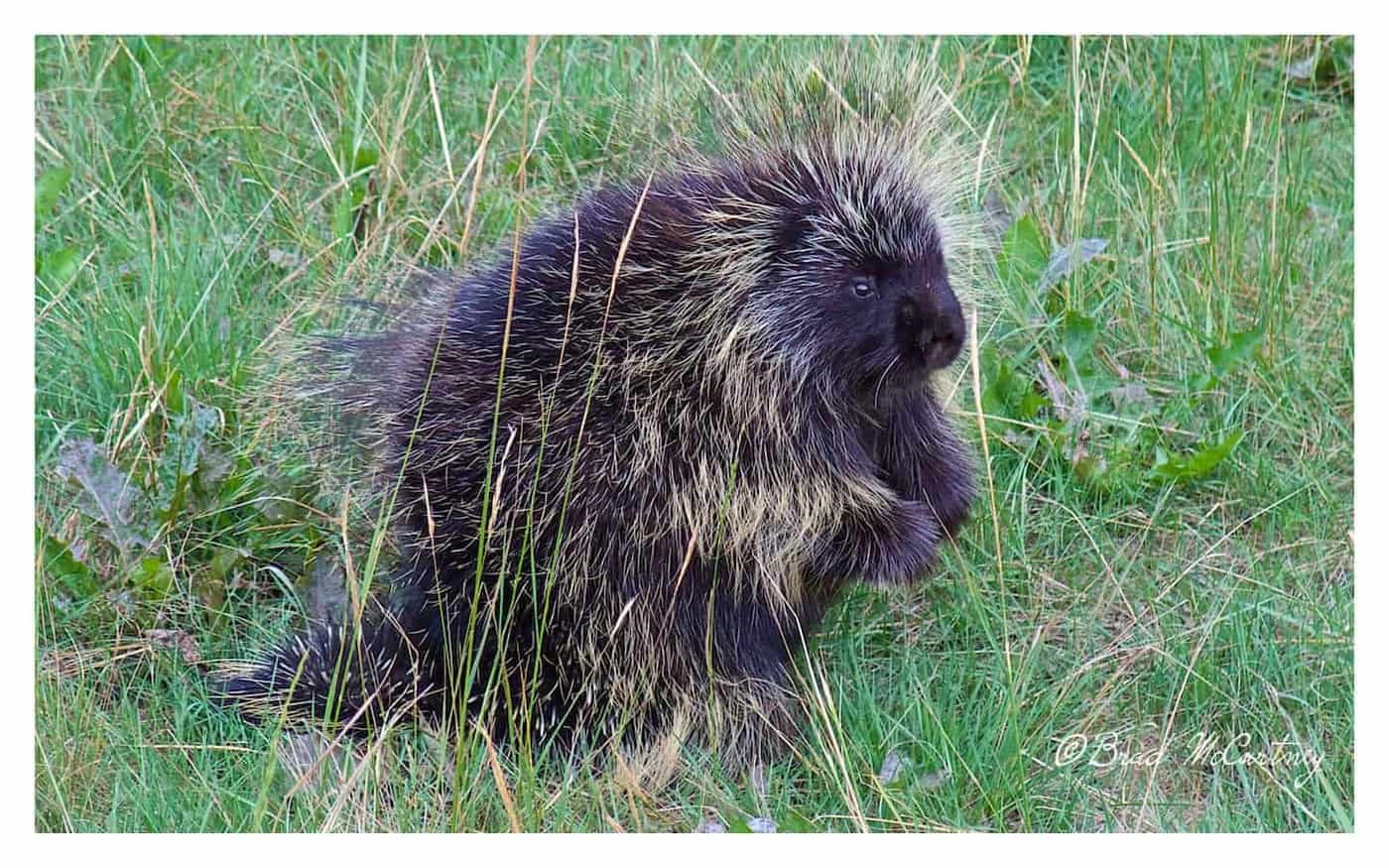 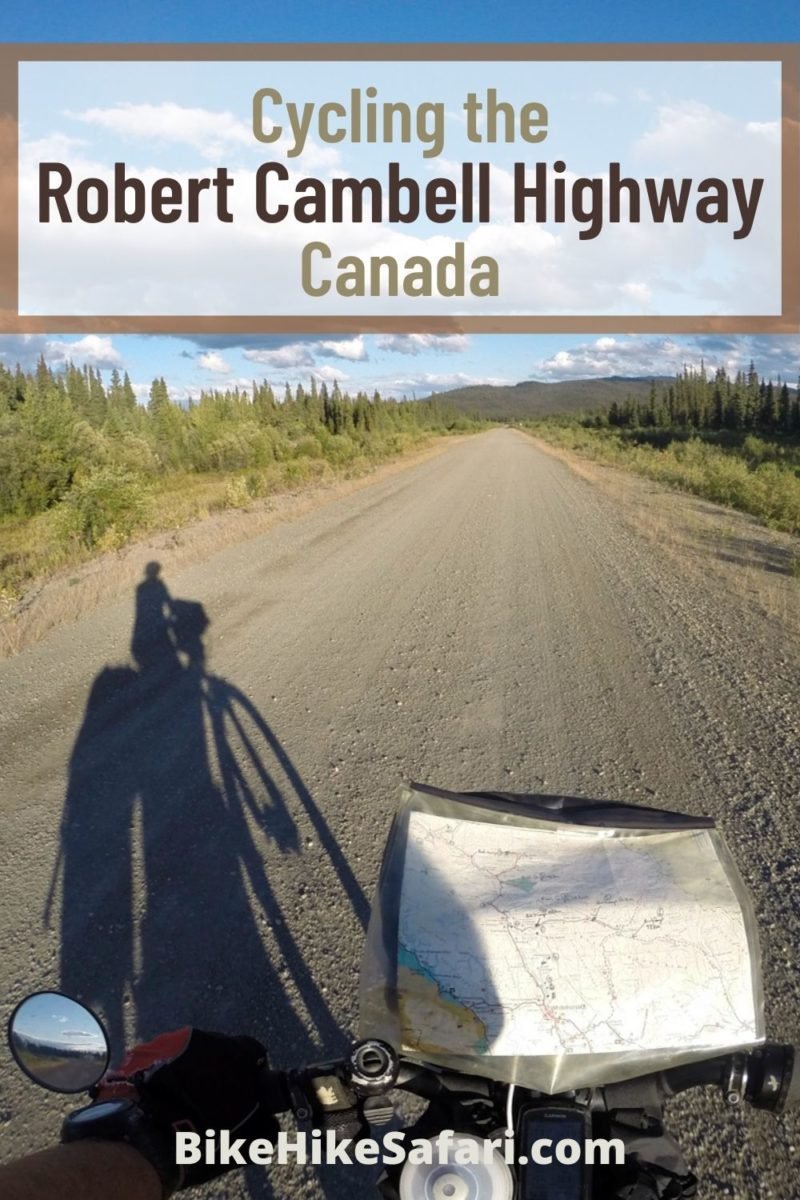 The Campbell Hwy is the second last of my remote highways in this part of North America. And it was remote, more remote and with less traffic than any of the other roads I’ve been on while cycling in the North. For example on the 584km between Carmacks and Watson Lake I saw only 1 cyclist, 4 Motorbikes and 4 RVs. There were a couple of trucks per day, specially near the mining areas and roadwork crews but that was it.  It was a lonely trip, just me and my daily encounters with wildlife.

I set off from Dawson City after a couple of days to let the body relax after the Canoe trip on the Yukon River. I planned the rather little visited highway called the Campbell Hwy. Very few cyclists seem to travel on it and that was why I wanted to travel that road. Just me, the road, wilderness and wildlife. Prior to turning off onto the Campbell Hwy I had to cycle the 355km from Dawson to Carmacks.

On route I faced cold, rainy weather which effected my energy levels as I was not consuming enough calories to cycle and keep myself warm, I should know better, every time there is heavy cold rain the same things happen. Mental note to self, eat lots when it rains and I’m cold!

I met several cyclists on the way. Two of them Johann and Beatrice (not sure of spelling) told me of a bear incident they had at the small village of Stewart Crossing. The Brown Bear was on the road and appeared to be actively stalking or hunting them. The noisy air horn they had didn’t scare the bear off and they felt very lucky when they retreated to the Gas Station to seek help. They told me to be very careful when in the area.

I was in Stewart Crossing 24 hours after the Bear incident with the other cyclists. I went to the Gas Station and spoke with the lady who confirmed the bear problem. It was known as a nuisance Bear. Trying to get into peoples houses. The Game Warden was actively seeking to rid the bear from the area but it was proving elusive. Suffice to say I cycled very fast through the rain until I was exhausted and 20km away before I safely set up my tent on the side of the road.

The town of Carmacks was 355km from Dawson. I not only had the heavy rain and a nuisance bear to contend with but several days of very strong headwinds which left me somewhat exhausted.

I didn’t really want to stay in town as I was eager to seek out the solitude of the wilderness areas. So I turned onto the Robert Campbell Hwy on the long and lonely 584km journey to Watson Lake. The road initially follows the Yukon River which bought back very fond memories of my Yukon River Canoe Trip, I was able to spot my campsite from 10 days earlier when I was on the river. There was very little traffic.

I was alone on the road with no people to talk to for a couple of days till I made it to the town of Ross River. I stopped there for no other reason than I wanted chocolate and I wanted it bad. As I was standing outside the grocery store one of the locals came to talk to me. He welcomed me to his traditional lands and asked the usual questions.

He told me that there were so many bears around the area and that I should watch out for them. I told him I had not seen one in several days since leaving the canoe trip on the Yukon. He advised me that was because I stunk real bad. I was going to tell him that he also stunk, but it was the liquor on his breath not the lack of shower that I could smell. I could smell myself, I was quite ripe and needed a shower. He advised me that if I wanted to see bears  then I needed to have a shower and wash my clothes. He pointed me in the direction of the laundromat and free showers right next to the grocery store. I thanked him and over I went.

The teenagers who were just hanging outside the laundromat all said hello as I walked into the building, as my smell hit them they all got up and promptly left. Even the lady inside who gave me change left the office shortly after I went for a shower. Was I really that bad. It had only been 6 days without a shower and I had washed in rivers along the way. Suffice to say I left Ross River smelling nice and with clean fresh clothes!

I passed an Italian cyclist, Ferrari, he traveled slow so he said. He was surprised to see me telling me of a conversation with road crews who advised that there was less than 10 cyclists had been on the road this year! I was surprised, thought it would be busier than that. Shortly afterwards my knee started to get sore when cycling hard up hills. I backed off on the leg power and all seemed well. Every time I peddled hard the pain returned, like nothing I’ve experienced before. I continued to just cycle at a more moderate speed up hills for the rest of the journey.

On the last day of cycling before Watson Lake I had a bizarre experience with a Black Bear on the side of the road. It was 10 meters from me on its back legs having a good smell of the air. Surprisingly I was not scared or nervous in any way. I stopped next to it and reached for my camera instead of my bear spray. I thought what a great photo, perfect. Did I mention it was 10 meters from me! Then the bear smelt me and it took off at warp speed before I could take that National Geographic front page cover photo.

The guy at Ross River was right! I also had daily wildlife encounters. Visits from Porcupines. From a distance they often had me thinking there was a bear cub on the road. Most didn’t seem to care about my presence. They have a great defense with their quills and animals know not to get too close. They just shook their rear end at me when I got too close.

A couple of days out of Dawson City I saw two young Arctic Fox cubs playing on the side of the road. Small, black in colour with a white tip on their tails, they were too fast for me to photograph, I think their den was in the nearby cliffs. One one morning an Owl followed me along the road, I guess hoping that I would scare out some animal for it to grab. Not sure what type it was but it did have mighty long ears and was dark on colour. My other constant companions were the squirrels, of all shapes sizes. Even the mosquitoes have deserted the area.

It’s starting to get late in the season and I can’t express how great it is to sit outside the tent in the evening and not be harassed by these creatures. Things are changing. The leaves are changing colours on trees, the berries are out. Soon the first snows of the year will come and hopefully I’ll be far enough south by then.

Speaking of change of seasons I am now starting to experience darkness at night for the first time since I arrived in the North in early May. With darkness comes the possibility to see the Northern Lights or Aurora Borealis. So every night I would wake between 1am and 2am and scan the skies. I really am keen to see them. But alas, a combination of bad weather, bright moon and low aurora intensity meant I was unable to see it. As I head further south my chances are now slim to zero of seeing it. But I gave it every chance.

After so much time alone recently I now am craving some company, hopefully I can link up with some other cyclists as I head south on the Cassier Hwy.

Next : Cycling the Cassier Hwy