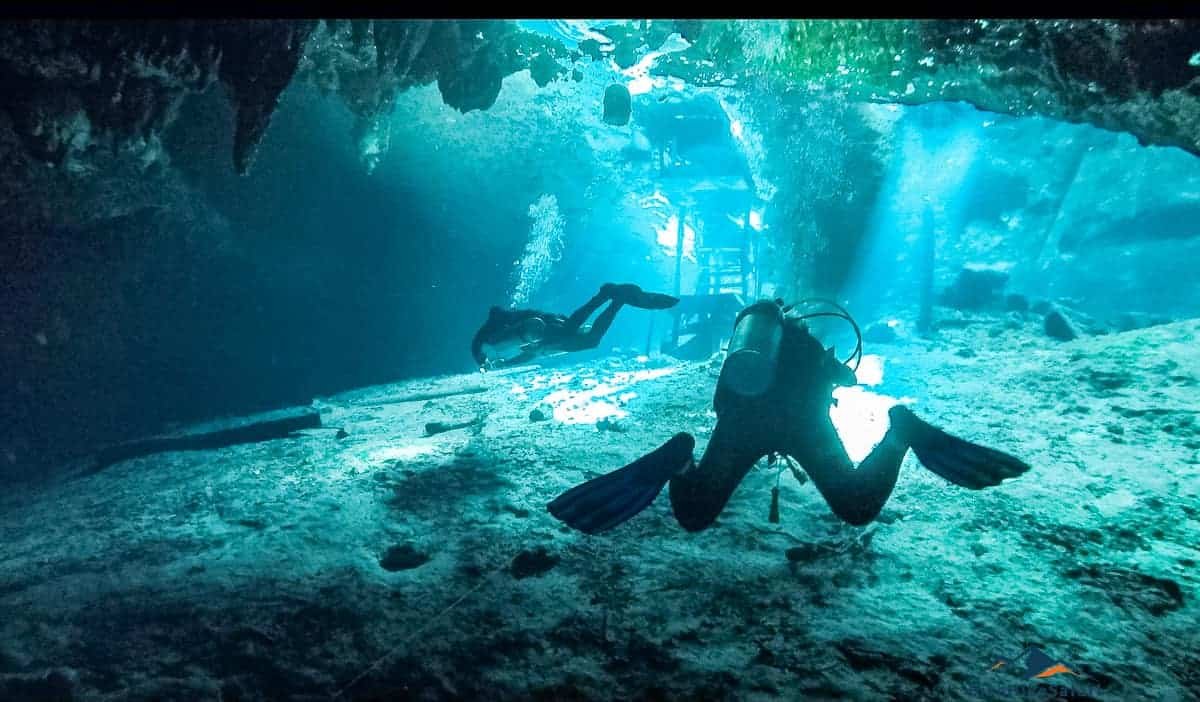 Cave diving or Cenote Diving on Mexico’s Yucatan Peninsula is a big deal. For many people like me it has been a lifelong dream to dive places like these. Arguably, the best Cenote dives in Mexico are Diving Cenote Angelita and Cenote Dreamgate. This is a small but important division from my goal to hike and cycle the most amazing places on the planet, it now includes diving.

Like many budding cavern divers I was faced with the task of choosing which cenotes to dive, which company to go with and what is best for me. I’m an experienced diver with well over 100 dives to my name. But it has been several years since I last went underwater. Would I still have what it takes.

My basecamp for the cave diving was Tulum. It is close enough to all the best dive sites and has many dive companies to choose from. After scanning the interwebs for the best Cenotes Dive Sites in Mexico I came to the conclusion that Diving Cenote Angelita and Cenote Dreamgate were the best.

With many companies to choose from I selected one of the small dive companies to head out for my dives. At $US130 I was happy with the price.

There is something special about Cenote Angelita. It is an almost perfectly round cenote which has a rare layer of Hydrogen Sulphide at a depth of 30 meters. The hydrogen sulphide layer appears like a think cloud and sits exactly in between the fresh water and salt water layers of the cenote. It is present due to the decomposing gases that are given off when organic material such as plant leaves and branches decay, or so I am led to believe.

For a diver, the goal is to descend through the layer to clear water below. It is like flying through a cloud. The only difference is the cloud is about 4 meters thick and the hydrogen sulphide gas, which smells a bit like rotten egg gas, can be tasted while passing through the layer. It seems to penetrate the rubber material of the breathing hoses. And visibility is only about 1 meter while in the cloud. It is also highly poisonous!

Below the hydrogen sulphide layer it is almost pitch black as little light is able to penetrate through. The high powered diving torch was the only means of light. To say it was a eery experience is hardly doing my feelings justice. It is unlike any other diving experience I have ever done. All the senses are used on this dive, including tase and smell, which is normally missing from any visual based dive.

As this is a deep dive, down to a depth of 40 meters my time below the cloud layer was limited. It was difficult to film or take photos on the dive. I am not an experienced underwater photographer. I found myself cramped for space on numerous occasions as we all stayed rather close together while diving.

In the remote Jaguar infested jungle of the Yucatan Peninsula lies Cenote Dreamgate. It is a cavern dive for experienced divers with good buoyancy control. There is a lot of silt on the bottom. If the diver in front of you is kicking up the silt then your visibility is limited. It is also a dark cavern with no light other than what is provided by the diving torchlight.

Unlike diving into a vertical cenote, Dreamgate Cenote is a series of shallow horizontal caverns that form circuit. I followed rope that was laid down by previous divers. For most of the dive it was pitch black and the dive lights were used to show off the many stalactites and stagmites. Although the caverns are not so long, they have a kind of beauty that I have not seen in a cave before. For non divers, imagine entering a cave and being able to float up and through the formations. That is what it is like cave diving.

This cave was so stunning it was used on the BBC Documentary Planet Earth. The Episode about Caves on Yucatan. Cenote diving has now been ticked off the bucket list, not that I actually have a bucket list.

Other Cenotes to visit in Mexico:

Have you seen my YouTube Channel? Check it out and subscribe. Then watch the video below and check out the Cenote Diving and more.