Biking and Hiking the Tasman Peninsula 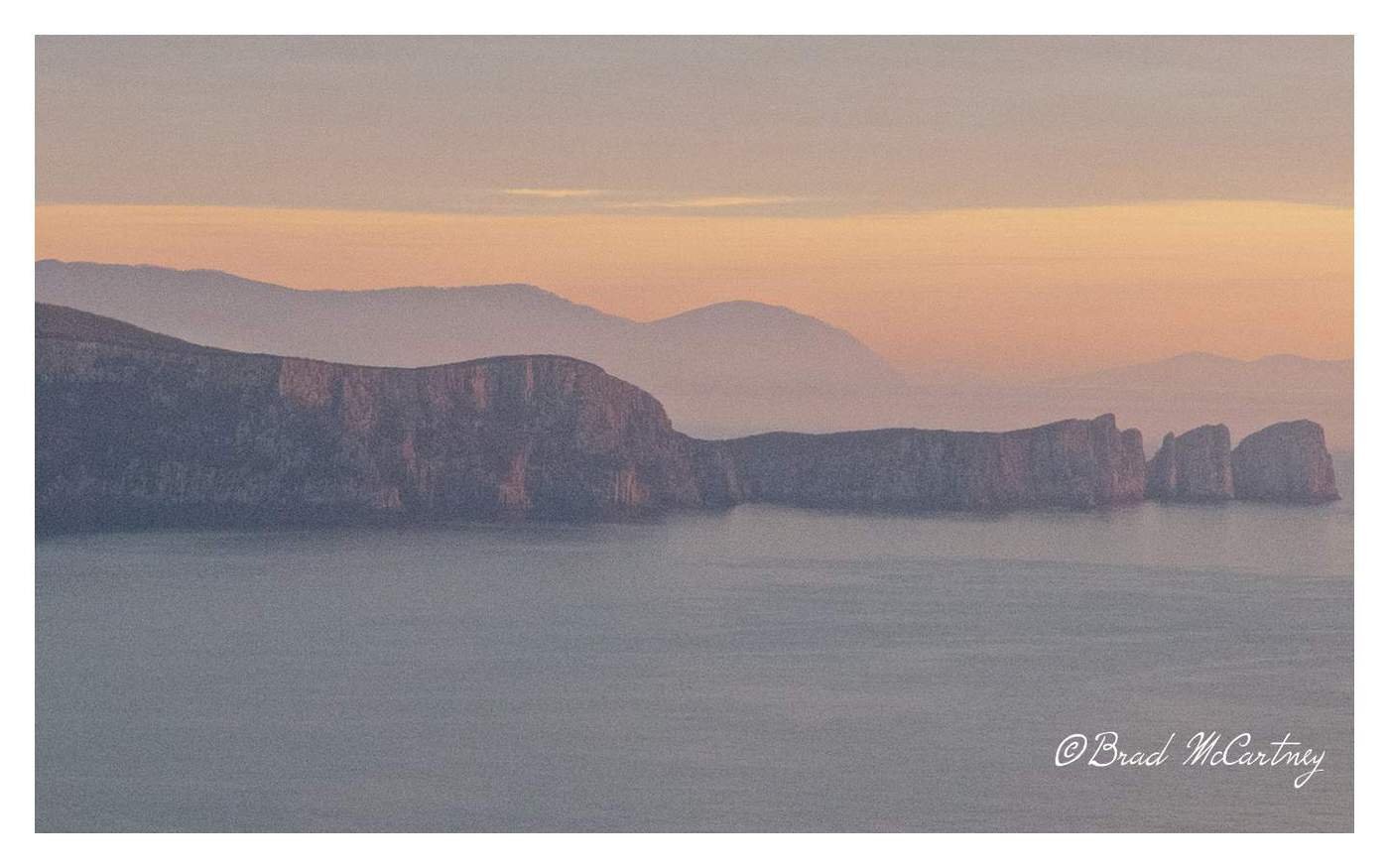 The Tasman Peninsula is home to the tallest sea cliffs in the southern hemisphere. There is great cycling and Tasmania’s next world class hike, The Three capes track is opening soon. I just had to cycle there and hike out to see what all the fuss was about.

The weather was hot when I left Hobart. I tried to follow the quieter roads to Tasman Peninsula, following Cambridge road. I entered the main highway for a short period around Sorell before taking the quiet back roads again through Dodges Ferry to Dunalley.

My cycling pace was good. I made it to the picnic tables at Dunalley for lunch. As per usual I didn’t have a planned destination for the night. I rode in the direction of Eaglehawk Neck to view the Tessellated Pavement in the late afternoon light.

It was getting late I mulled over where to stay. I looked at camping on the beach but it wasn’t great for camping. I peddled up the hill to Tasman Arch and Devils Kitchen for a look. It was late so I camped on the hiking track that joins this area with Waterfall Bay and onto Fortescue Bay. Apart from a few locals walking in the late evening I wasn’t bothered and enjoyed the camp next to the high cliffs overlooking the ocean.

The Tasman Peninsula is said to be home to many wild Tasmanian Devils. Early the next morning I cycled to the local wildlife park. Since my arrival in Tasmania I’ve been fascinated by the large amount of wildlife encounters I’ve had. But I haven’t seen a wild Tassie Devil, yet, I’ll keep looking. The wildlife park also had it’s fair share of other animal such as kangaroos, quolls and more.

After lunch I cycled to Port Arthur. One of the premier tourist destinations on the Tasman Peninsula. It has an interesting convict past. I was here many years ago and don’t remember it being so touristy or expensive. I left a little disappointed and there are renovations going on at the moment that have closed some areas.

Judging by the shear size of the carpark, this place gets smashed by tourists in the middle of the holidays! Once again it was getting late and I was thinking about a place to stay so I looked at the map and headed to nearby Remarkable cave around sunset. I witnessed some surfers among the waves with seals and stayed the night sleeping in the carpark, there were a few surfers enjoying this sneaky free camp.

Early next morning I hit the road. A heavy shower of rain during one of the long hill climbs made me seek temporary shelter undercover in the supermarket outside Nubeena. It didn’t last long so I made my way to the Cape Raoul area. I took off for the short walk to Shipstern Bluff the famous surfing area. When the conditions are right this area is smashed with some of the biggest surfing waves in the world. Did I mention the prevalence of seals in the areas bring great white sharks!

While I enjoyed the 250m high cliffs overlooking the Southern Ocean and views to Bruny Island I looked at the time and the weather and thought, why not head to Cape Raoul. I planned to do it the next day but thought I’d have enough time and the weather was clearing so off I went. After the short climb I made it to a lookout that was about 420m above the Ocean. Stunning.

I had to stop and and soak up the place, I was impressed. Another 45 minutes after the first views of the cliffs the track again made its way to the cliff side and followed the cliffs for the next 30 minutes to the high cliffs of Cape Raoul. The was a sailing vessel very close to the cliffs, at first I thought it was in trouble but as I got close it had maneuvered out to sea. Possibly moving close to the cliffs for a good view. From the furthest point on the Cape I could hear seals or sea Lions but it took me about 5 minutes of searching  to find them at a haul out area 240m below me.

It was late now so I started walking fast to the campground at the carpark area at the start of the track. Part way along I ran out of water but made it back to the carpark in well under the time they guides recommend for the area. Guess I’m getting hiking fit by now. Camped the night for $5 and some very friendly grey nomads cooked me a great dinner. The random acts of kindness seem to happen to me a lot. It’s not the first time I have received such acts of kindness, I am humbled.

Completed the lap of the peninsula by heading back to Nubeena to stock up on supplies and cycling to Fortescue Bay. The campground has a shower to I gladly scrubbed a couple of days sweat from my body before heading off on the overnight hike to Cape Hauy and Cape Pillar via Mt Fortescue. Its said to be a 3 day hike but I planned on taking only 2 days to complete the 37km trek.

I set off at about 8am.  I arranged to store my bicycle with the caretaker of the campground and kiosk. Thank you. It saved me from having to hide it in the bush somewhere. I following a local school group on the nicely maintained track to Cape Houy. Its sheer sea cliffs has some of Tasman Peninsula most famous rockclimbs. I peered over at a climb called ‘The Totem Pole’. I could hear climbers down at the base but couldn’t see them.

I followed a climbers access track for a better look but still couldn’t see them, they must have been gearing up for the climb and I didn’t really have the time to sit all day and wait so I set off in the direction of Mt Fortescue. The first part of the climb is in great condition with gravel and crushed rock as it has been recently upgraded as part of the new 3 Capes walk that Parks are building. But as the climb really starts it turned into your average Tasmanian style track to the top.

I had lunch at the summit which didn’t really afford any great views or no better than had been had further back down the track. The somewhat slippery trail continued down past a campsite and waterfall until it reached the track junction with the track on the right going to Fortescue Bay and left to Cape Pillar. So left it was.

Shortly after the track junction the track construction crew were busy building the new track that will be the 3 Capes walk. They were hard at work and nice guys to talk to about the track and their life working out bush. They are all proud to be a part of such a project.

The track was only open for hikers between Friday and Sunday at the moment. This allowed workers to progress without any interruptions, including the flying of materials and supplies by helicopter. Lucky it was a Friday when I was there. I continued along newly constructed crushed gravel tracks, boardwalks and stone stairs with sections of the old track where construction of the new track hasn’t commenced yet until I reached the end of the track. I was greeted by a sign, to the right for an area known as ‘The Blade’ and left to the area known as ‘The Chasm’.

I headed up to ‘The Blade’. It was around 6pm by this stage and the track crew were still hard at work on constructing the walk up to the top of ‘The Blade’. I stayed up there for about 30 minutes taking in the vistas of Tasman Island with its isolated lighthouse. There are some towering cliffs that encapsulate the whole area. I looked back at Cape Houy, from where I’d walked earlier in the day and observed just how high I was at the top of Mt Fortescue. Wow. Impressive.

It was nearly sunset and I didn’t have a place to camp yet so I hurried down and headed a back from the junction to a small area just big enough for my tent and hurriedly pitched the tent and cooked up some dinner.

A peaceful nights sleep was broken by the early morning chorus of the birds and as I was so close I decided to head back up to ‘The blade’ for another view from Cape Pillar. I sat in awe again. Sunrise was sensational as it slowly lit up the cliffs of Mt Fortescue and Cape Houy.

I made my way to the other section of track at Cape Pillar known as ‘The Chasm’. More of an old school Tasmanian track to a sheer chasm and great views of ‘The Blade’ and Tasman Island. Once again I had to move on. I was out of water at this stage. There was no water source near where I was camped. I knew that it was about 2 hours of walking until I reached the next flowing creek where I could re-hydrate myself again, so off I set.

I reached the creek in less than 2 hours and hydrated and continued on my way back to Fortescue Bay. It only took me less than 5 hours (inc rest breaks) to return from Cape Pillar to the campground at Fortescue Bay. My bike was waiting for me at the caretakers residence. I was quite shattered by this stage and stocked up on food from the kiosk at the caretakers office.

The ‘Cape Pillar Circuit’ on the Tasman Peninsula was one of the nicest hikes I have done in Tassie. Most of it will be incorporated into the 3 Capes walk when it is completed in November 2015. The walk will start at White Beach and finish at Fortescue Bay. There will be an option of continuing on the Waterfall Bay track to Tasman Arch and Devils Kitchen near Eaglehawk Bay. In my humble opinion it will be Tasmania’s next great walk. I can see people coming to Tasmania from all around the world to complete this hike. Similar to what is currently happening at other hiking locations in Tasmania. Not sure if Tasmanian’s will like the hike as there will be no sections of knee deep mud! I will return at some time in the future to complete the full trek, I can’t wait.

Do you want to hike the Three Capes Track? Or have you done it?
I would love to know your thought, leave a message in the comments section below.

Next : Biking and Hiking Maria Island

10 thoughts on “Biking and Hiking the Tasman Peninsula”