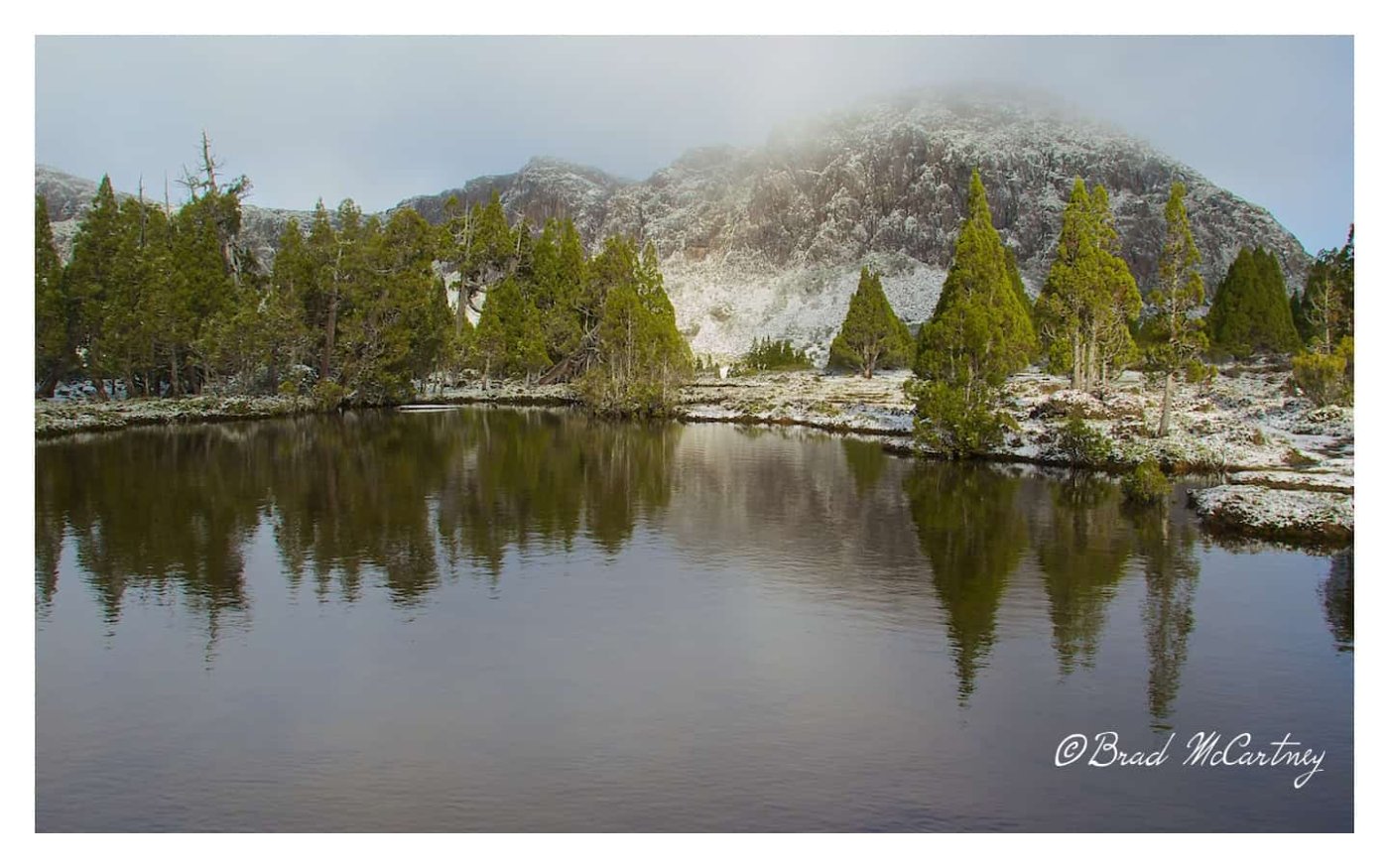 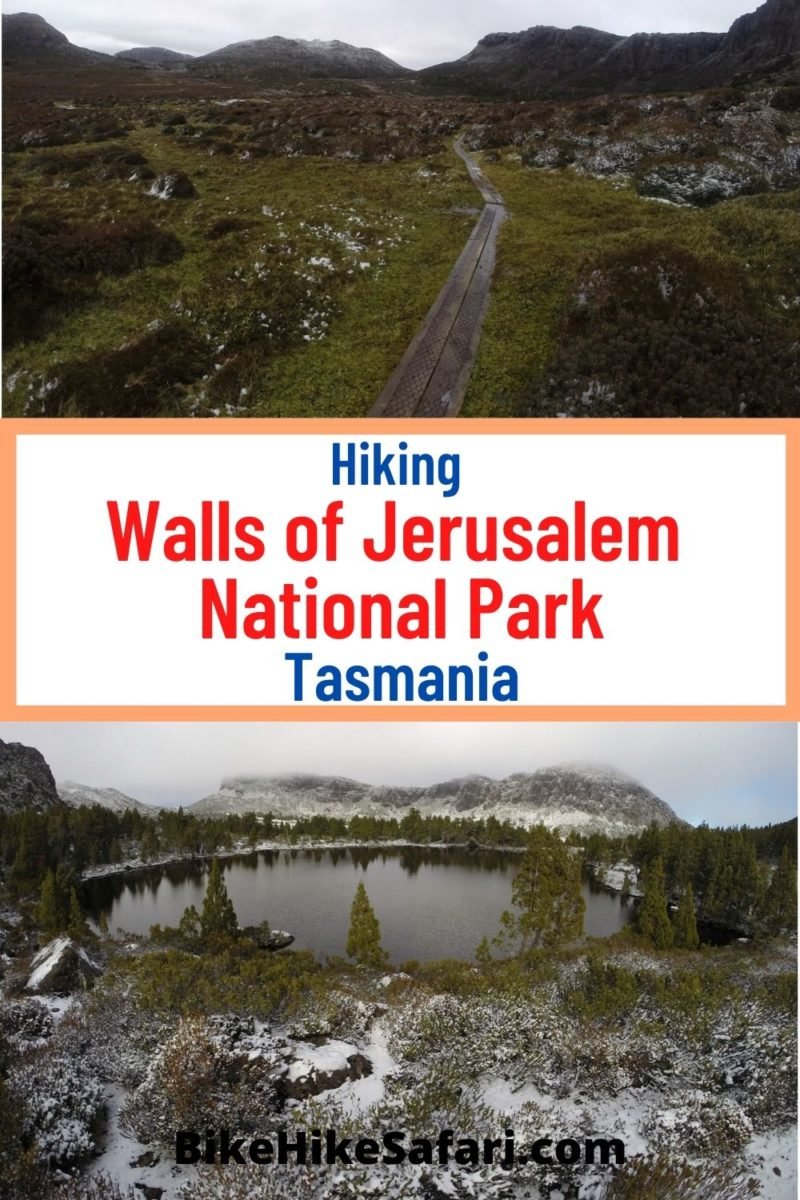 I cycled to the start of the walk in the Walls of Jerusalem National park which has a rather bad reputation for cars getting broken into, so I had to hide my bike and cycle touring gear in an area that thieves would not be able to find. Luckily there are many suitable places to hide the bike near the carpark.

A couple of days ago I checked the weather forecast and it was not looking good. Rain, snow above 1100m, a cold front coming in from the west and every other sign that told me it could get nasty. But I proceeded anyway. My clothing and equipment had me prepared for bad weather and temperatures to around -5 to -10 degrees, so I was ready.

From the carpark there was the slog up to the plateau, on the way up it started to snow. My first thoughts were, cool, I can’t remember the last time I was hiking in snow. As I continued and made it to the top of the plateau the snow and wind increased. I passed people heading down from their hiking trip and I noted the rather cold and unhappy looks on their faces, all told of the blizzard in the early hours of the morning and the snow they have tramped through.

As I continued further the snow and wind increased in strength but I was warm comfortable and happy. Like a lot of weather in the mountains, just as quick as it arrived, it stopped and by the time I made it to the Wild Dog Campsite the weather looked like clearing up.

It took only about 2-3 hours to hike here from the carpark so I stopped for a rest and some snacks. Then it happened. The sweat on my inner layers started to chill my core and extremities very quickly. Within a matter of minutes I couldn’t move my fingers and hands properly. I had a choice. Keep walking to warm up or make camp. I choose the later.

I always keep a dry change of thermals to get into when I finish hiking. My first task was to put up the tent and changed out of the wet gear and slowly started to warm up. Gusts of wind around 40km/h appeared and then more snow, my tent started to buckle and strain under the load.

When the wind subsided the snow increased, now heavier than before until it covered the whole of my outer tent, which warmed up the inside of the tent nicely, like an insulation blanket. My thermometer showed a balmy -1 deg celcius. But I was warm now.

As the afternoon and evening progressed it got noticeably cooler. At 10pm I woke up very cold. I looked at my thermometer, -6 degrees Celsius. My -7 degree rated sleeping bag was struggling with my tropical rated body. I put on my fleece jacket and down jacket and within minutes I was suitably warm again.

By morning the cold remained but I put on my several layers and set off with a view to climb the 3 peaks of Solomons Throne, The Temple and Mt Jerusalem. I was the only person walking in the morning and had the place to myself. I learned that ice on wooden boardwalk made for moves similar to those know only to ice dancers.

My first climb was to the top of Solomons Throne, I noticed footprints but didn’t see anybody. At the top the 30km/h winds and sub zero temperatures meant I only stayed for a short visit before slipping and sliding down the icy slopes and up the next climb of The Temple. This climb was much more exposed to the cold wind, which at times was well above 50km/h. At the top I was rewarded with views of the whole surrounds which eluded me on the previous climb. What an extraordinary area. I now know why every local bushwalker I spoke with told me that The Walls of Jerusalem National Park is their favourite place.

I headed over to the next valley for lunch inside Dixons Kingdom Hut and climbed Mt Jerusalem but the strong wind and low cloud meant it was just a climb to tick off the list as there was no view, low cloud saw to that.

On return to Dixons Kingdom Hut I planned a circuit to get back to camp. So with only a couple of hours of sunlight left I headed for Lake Ball and followed the Junction Lake track until it reached a saddle that my map told me would take me across to my campsite. With a little bit of navigation, regularly consulting the compass and take bearing and back bearings I made it to camp about 15 minutes before sunset, a bit close for my liking. But I did complete a worthwhile circuit walk.

Blizzard, snow storm, whiteout. I stayed in the tent all day.

Overnight it snowed and my sweaty boots from yesterday were frozen solid and rather difficult to get into. But I took off early in the deep snow to explore the winter hiking of the lakes and pools of ‘The Walls’. I planned another circuit walk of about 5km that would take in the scenic Pools of Bethesda, Gate of Chains, Pool of Siloam and return to camp via the North side of Lake Silone.

Most of this area didn’t appear to have any paths or tracks, but as there was so much snow I wasn’t really sure. I just tread my way through the snow until stopping on so many occasions to take in the stunning vistas. During the winter hiking I had two problems. Firstly, my boots were frozen and making my feet cold no matter what I seemed to do. Secondly, I lost my sunglasses before the walk and the sun was starting to come out. I was a little worried about snow blindness. Lucky for me the sun only started in earnest when I was close to camp so I warmed myself in my now sun covered tent and began the slow process of thawing out and packing up camp.

It took only about 2 hours to return to the start of the walk in brilliant sunshine and find my bike in the same place I left it. I jumped back on a rode to the White Water Paddlers campsite about 10km away and slept like a baby overnight.

In good weather in summer with the long hours of sunlight this walk could be completed by fit people in one, big, long, tiring day or rather comfortably overnight. I chose to take longer as my preplanned exit from Tasmania was booked and I had the time to spend it ‘out bush’ rather than in some town. Despite the weather being very average for most of my time at ‘The Walls’ I wouldn’t have wanted it any other way. Winter wonderland without it actually being winter yet. One of my most favourite places in Tasmania.

Have you hiked ‘The Walls’? How was the weather?
Let me know in the comments section below.