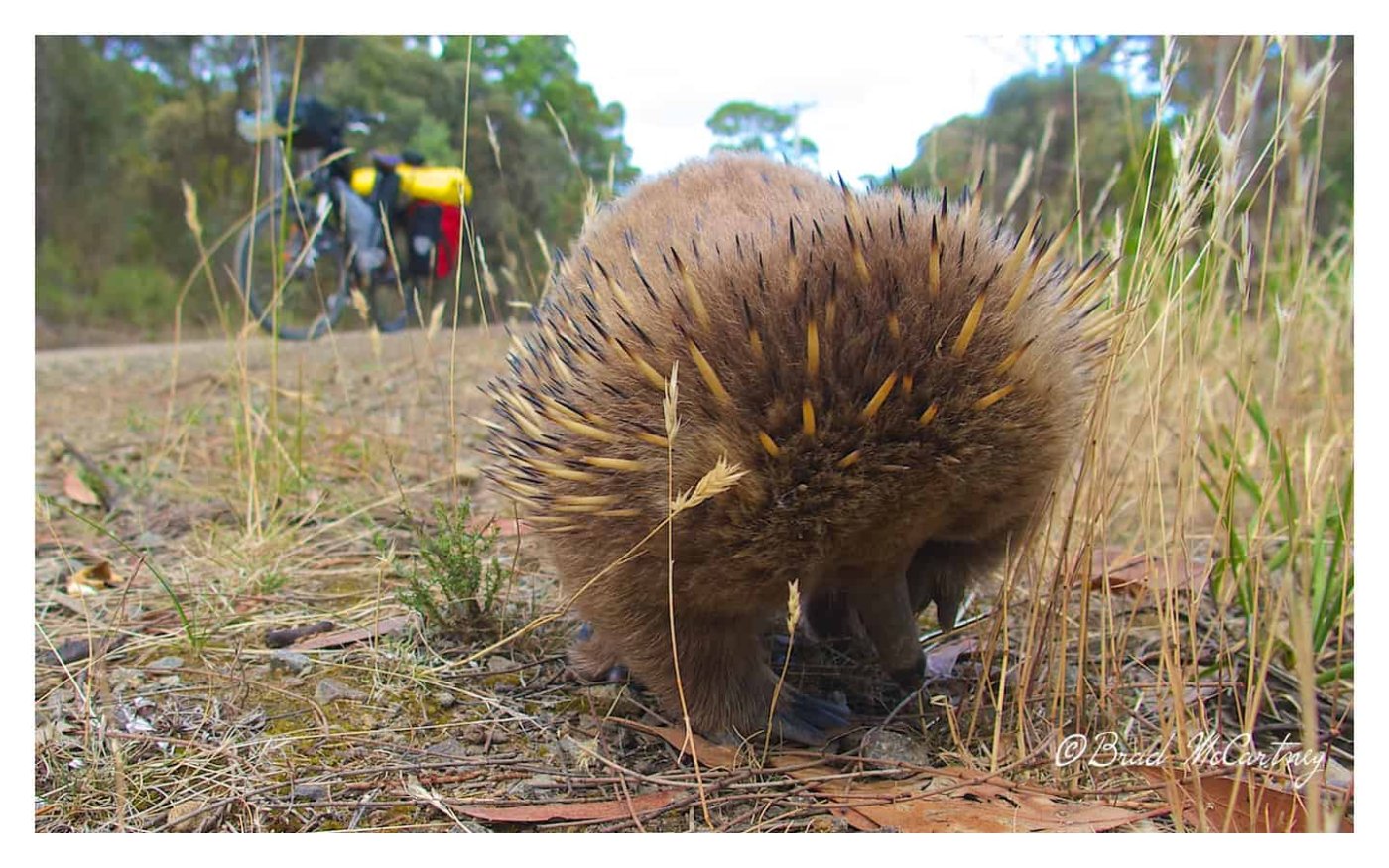 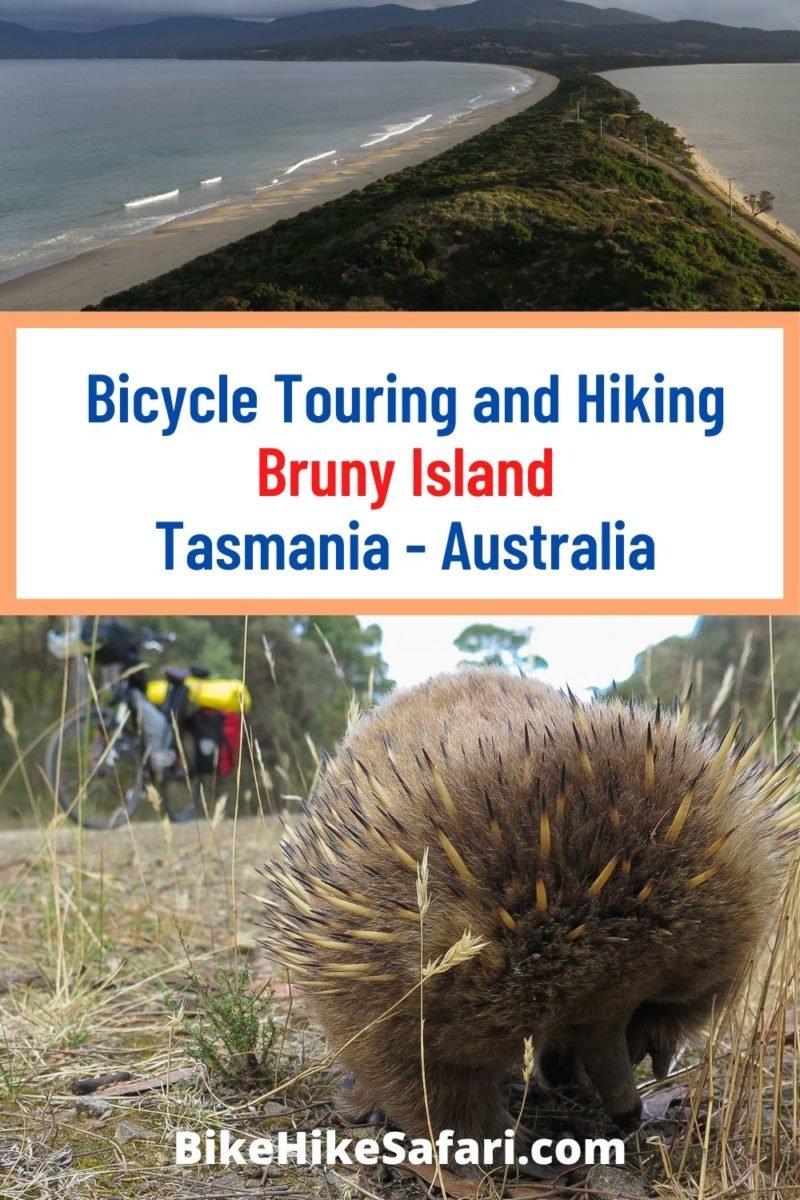 Cycling Bruny Island is a small niche travel destination for the mainstream traveler. It is well know to cycle tourers for its ease of access from Hobart, scenery, wildlife, quiet roads and great camping. Time for me to slow the pace for a couple of days to Bruny Island pace.

After a couple of days rest from in Hobart from the recent hikes on the Port Davey Track and South Coast Track I headed south again but this time to go cycling Bruny Island. Its only about 45km by road from Hobart so I set off mid morning and reached the Island for lunch.

The car ferry leaves about every hour. I was the last to leave the ferry when it docked on Bruny Island so I didn’t see any traffic come from behind me for an hour, great for me as a cyclist.  I headed for the first campground on a place known as The Neck, which is the name given to the narrow strip of land the runs through the middle of the Island, which in essence separates the Island into North and South Bruny.

I made the short journey to nearby Adventure Bay where I made my way to the hike that leads to Penguin Island and Fluted Cape. Not too many people seem to make this hike, I was in search of the White Wallabies that inhabit this part if the Island, but didn’t see any on the hike. The views of the sea cliffs made the hike worthwhile.

It was known as the only safe haven / port for the explorers after they rounded The Cape in South Africa and many of them used Adventure Bay as the place to gather water, collect grass for the cattle and repair the vessels after the long journey. My lack of knowledge of this early exploration has spurred me to download and read Captain Cooks journals of his voyages of Discovery, my current reading material.

It rained all day and I spent it with Jennifer and Laurence (of the Overland Track  and South Coast Track fame), we have been following each other for the last month. I realised I haven’t really had a day of doing nothing since I started this trip, so I guess I felt ready to do nothing on this rainy day.

I heard from other people cycling Bruny Island on the backroads are not really good fun for cycling, well, I took one of those roads. Its the road that heads out of Adventure Bay, up through some logging roads and over to Cloudy Bay. At first I was so exited when I saw a White Wallaby in a field on the side of the road, it was not photogenic for me as almost all the wildlife on Tasmania has been to date.

The road slowly deteriorated to a steep push, when my legs could no longer power me up the hills. It was a slow process. Once at the top I appreciated the rainforest and great riding. The rain yesterday seemed to infuse the air with a fresh smell and the forest seemed a darker shade of green today.

On the downhill sections I rode the bike way too fast at one point over a rough, rocky steep section and payed the price by pinching the tyre tube on the rear. I hadn’t reduced the tyre pressures and it was my fault for riding too fast. The first puncture on the trip sent the tube to the rubbish bin as it was no longer repairable. Boo.

Cloudy Bay was a bit of a surprise package. Great beach that arched around for several kilometers. In the distance I spied a couple of 4WDs at the far end of the bay, along with some boats that must have been anchored in the sheltered part of the bay. The beach looked firm so off I went for a cycle on the beach.

It was great to cycle with the smell of the salt and the sound of the waves. I haven’t cycled on a beach before, so I thought it was cool. While cycling on the beach I observed a dead fur seal and a dead shark, the shark had its fins and teeth missing!

Judging by the tracks from the 4WDs they would be going too fast to even notice these things. At the far end of the beach was a secluded campground but I choose not to stay there as I wasn’t sure about the tides and didn’t fancy being stuck there the next morning with high tide and having to push the bike over the soft sand. Anybody who has tried pushing a fully loaded touring bike over soft sand will know the pain…

From Cloudy Bay I decided to make a run for Jetty Beach. It was getting late afternoon and after expending a lot of energy on the climb over the mountain. I was not sure how I would go getting there before sunset. Initially it was easy flat riding from Cloudy Bay until I was about 12km from the campground. Fatigue started to set in, just as the hills arrived. I was starting to bonk (run out of energy) and arrived at the campground just before sunset quite exhausted. It was quickly fixed by a cup of tea and a huge serving of pasta. Damn I slept well that night.

Jetty Beach is near the Cape Bruny lighthouse. I made that the destination for the morning. While sitting at the lighthouse it was easy to cast my mind back several hundred years to the unchanged sights out to sea and the thoughts of what it must have been like to the many explorers who graced this part of the world.

After my moments of quiet refection I moved on to the Neck campground. I had been a couple of days earlier. On the way I had yet another amazing experience with an Echidna. I seem to have fallen for this most unique of animals. They are remarkably photogenic, well for me anyway. When I am traveling by bike or hiking I seem to be seeing quite a few of them, probably more than others who only see Tasmania by car. Interesting fact, the first sighting of an Echidna by European explorers was on Bruny Island!

From the campground at the Neck, I wanted to check out the nearby beaches around sunset to see if any Penguins were still about. Normally by the end of March they have gone out to see and don’t return to the beach. I wanted to check it out, maybe there were some that were reluctant to give up their sheltered night time campsite.

There was light rain when I arrived that produced a vividly coloured rainbow down on the beach. I ventured to the beach but no pot of gold. For 2 hours after sunset I waited and didn’t see any Penguins. I did see several Short Tailed Shearwaters, also known as Muttonbirds. These birds arrived while it was dark and seemed to crash land nearby as I was waiting for Penguins. Their apparent grace in the sky is not matched on land.

They make a yearly migration from Tasmania to Russia and Alaska. Might see them again in Alaska, they will arrive there the same time as me! On the night time ride back to the camp I did manage to see a Penguin. It was molting so had to be on land until the molt was over.

Have you Cycled on Bruny Island or are you planning to go there?
Leave me a message in the comments section below.

Next : Cycling to the most Southern Road in Australia