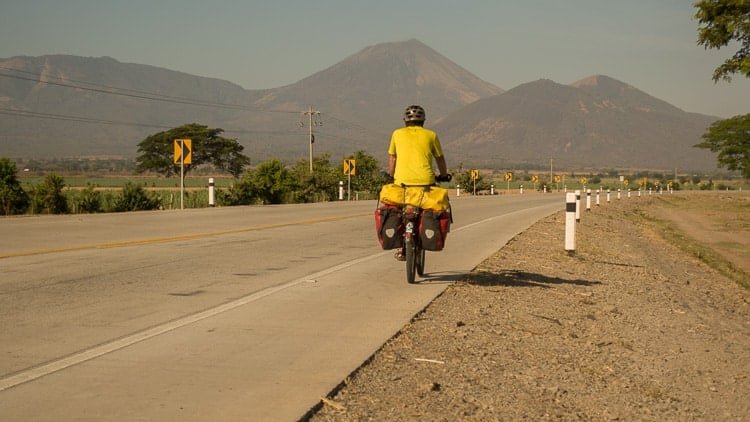 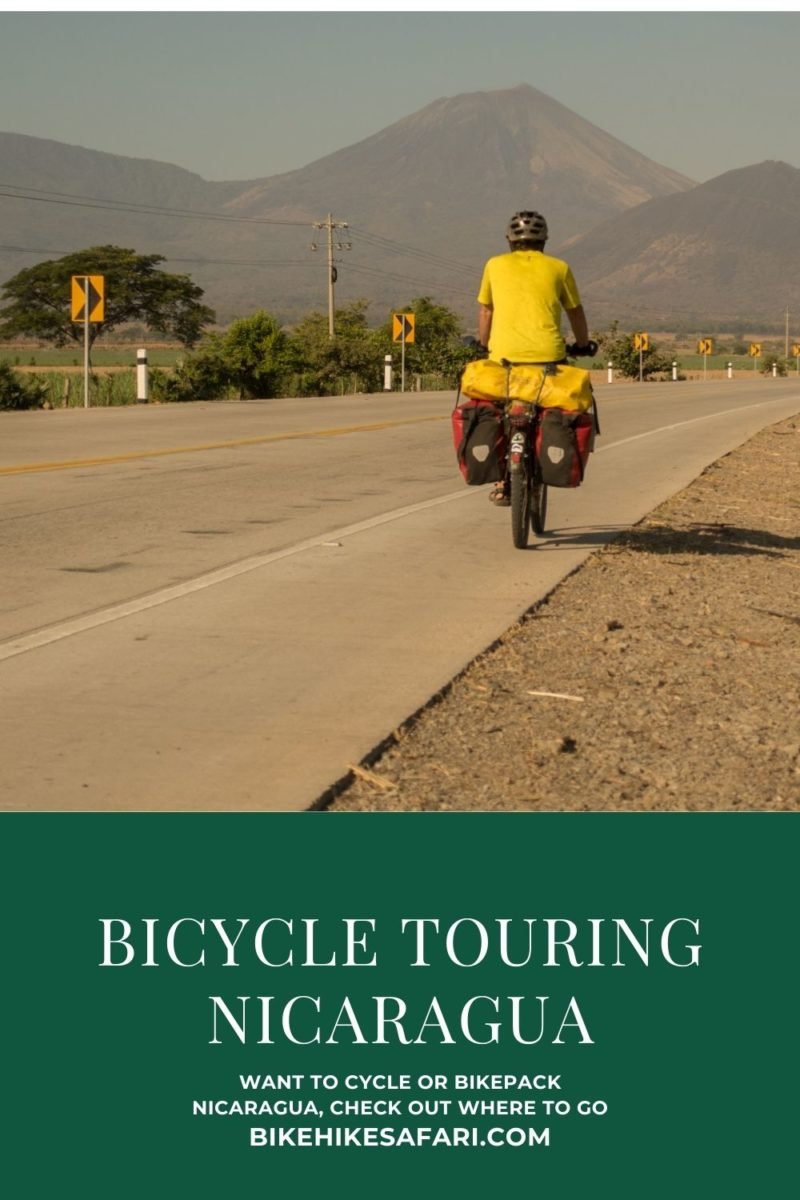 Bicycle Touring Nicaragua was to be a highlight of my time cycling in Central America. Unfortunately, politics, bureaucracy and the people got in the way. My arrival in Leon, a large tourist city in the north of the country was not what I expected. As I arrived at my hostel mid afternoon there was already tension in the air. Several masked rioters walked past me carrying large steel bars. Full face motorcycle helmets concealed their identity. Something was about to go down. This was not a safe place to be.

Entering Nicaragua with a Bicycle

The day before I entered Nicaragua via its border with Honduras. Entering a country by bicycle is usually very easy. Nicaragua did it’s best to make the process very difficult. It was such a bureaucratic nightmare it was almost laughable. Let me explain what I went through.

Firstly, I had to provide a complete list of every country I had traveled in on this journey. Complete with entry and exit dates. I’ve been traveling for almost 5 years, can you imagine the nightmare. Why?

Secondly, I had to provide a complete list of my itinerary within Nicaragua. OK, that I can understand, at least a little bit. I made things up with approximate dates and places.

Thirdly, I had to provide 2 photocopies of my passport photo page and 2 copies of my entry stamp page from Guatemala. I had to pay for that privilege.

Then came the waiting. Several hours of waiting for goodness know.

My panniers were x-rayed and I was asked about all the gear I was carrying. By the way, drones are illegal in Nicaragua. They were definitely looking for one in my luggage. I’d love to have a drone by the way, that would make for great video footage on my YouTube Channel and interesting photos on this blog.

Anyway, after almost 3 hours I was sent on my way. What a mess. What a bureaucratic mess that really didn’t need to happen, but, this is not my country and I don’t make the rules. Bicycle Touring Nicaragua was not going to be easy.

And Finally, if you are thinking of carrying a drone it will be confiscated.

The delay at the border meant there was no chance of making it all the way to Leon that day. I settled into a run down hotel and made plans for yet another pre-dawn start the following morning.

My online maps indicated that there was a backroad short cut to Leon. The small road cut between two volcanoes. It also looked like there was a possibility to climb them. I was carrying a bit of extra food so I made a plan to give it a go and see what happened.

The volcanic sand made for slow, tough cycling. Each soft patch had me almost falling off the bicycle before getting off to push. Several kilometers of this had me concerned about my water supply. I passed farmland but the only person I saw was blind drunk staggering down the trail. I passed a couple of farm houses but the normal friendliness of the people seemed to be lacking.

After pushing my bicycle for a while I consulted my map and found that very soon I would start to make my way uphill. Prior to this the grade was very gradual. It was uphill but not really noticeable. I stopped and sat next to my bicycle to drink and snack on a granola bar. My energy levels had not returned to normal after my illness while cycling in El Salvador and cycling in Honduras. I made the decision to turn back and take the main highway to Leon.

Protests and Riots in Nicaragua

The highway afforded me some of the best tailwinds I had had since Belize. Cycling at speeds of 30km/h on flat roads is a dream. If this continued I’d be in Leon in no time. It didn’t keep up. The road turned into the wind and my pace slowed accordingly.

A black Dodge Ram SUV stopped ahead of me on the road. The guy got out of the vehicle and motioned for me to stop. He was well dressed in cowboy attire. Obviously not your average criminal wanting to rob me. My instinct told me this guy was OK.

“Be careful in Managua and Leon“, he told me.

“There will be protests and it might be very dangerous“.

We chatted for a little while about what was happening in Nicaragua. The dictator president. Corruption. And low pensions for the people.

I often had people warn me of trouble in the next country, the next state, the next town. Most people were trying to be nice. But a lot of these people don’t travel much and as happens in many countries in the world, people are scared of places other than their own. Something about this warning was sincere.

I arrived in Leon mid afternoon. There were a couple of groups protesting peacefully on the outskirts of town. Loud music, flags waving and slogans about the poor government.

I cycled into the very nice Hostel Lazybones. The gates to the hostel were locked. I was buzzed inside and greeted warmly. Guests were busy drinking beer in the hostel swimming pool. The intense heat of the day had me joining them after I settled in. It was a social hostel full of people half my age.

For the first time in a week I was hungry. Just up the street was a Pizza place. I settled in to order a large pizza, washed down with a beer. I updated my daily diary which I’ve been keeping since I started my travels. I’ve filled 7 or 8 Moleskine Journals worth of writing.

The restaurant staff were crowded around the television. The president was giving a speech. The staff moved quickly to the door and windows. I looked out the window of the restaurant to see several men carrying large steel bars walking down the street. They were wearing full face motorcycle helmets to conceal their identity. The doors and windows were then locked. Leon was no longer a safe place.

Locked inside the Hostel

Police arrived in riot gear. Maybe 20 of them in total. I walked outside with my camera but was forced to return to my hostel. Explosions could be heard in the distance. The power was cut and the whole town was in darkness. There were maybe 20 people staying at the hostel. We sat in the swimming pool drinking beer and contemplating what to do. Hostel staff were organising transport to get people out of Nicaragua that night. At 2am everyone bar 5 of us left the country.

Making a plan to leave the country

The following morning I walked around the streets. The clean up was happening. A building had been burned and windows on a government building had been smashed. I felt safe as I walked around. The violence and protests the night before seemed like a distant memory. But I was not going to hang around. I made a plan to get up at 4am and make my way as fast as my body would take me to Costa Rica.

The streets were all but deserted the following morning. And there were very few vehicles on the road. I stopped often to get water and talk to the locals to find out what was happening and if they thought I would be safe. All agreed I was safe. Most felt slightly ashamed that this had happened. They were very proud of their country and wanted me to see how amazing their country was. On several occasions shop keepers gave me fruit and water without asking for money. I started riding before sunrise and kept going until just after sunset. Exhausted I settled into a ‘Love Motel’, for the night. Resigned to another pre dawn start the following morning which should see me at the border with Costa Rica.

In the morning I made big miles very quickly. But I had a problem that I first encountered yesterday. There was now a shortage of drinking water. Every store, gas station and food store had run out of water. The only liquids I could drink were Coke or fruit juice. Locals told me that the government had stopped the delivery of water to try and force the protesters off the street due to the extreme heat of the day in Nicaragua. Let me tell you this, my body did not appreciate the intake of around 8 litres of sugary products per day. What a nutritional nightmare.

I made a last minute decision to take a detour to Isla Ometepe, an Island on Lake Cocibolca. The Island was formed by the two volcanoes, Conception and Maderas. There were few tourists. I rested and ate lots of food while keeping an eye on the security situation. Rumours started to circulate that Costa Rica was about to close it’s border to Nicaragua. It was time to get out of Nicaragua, fast. And now the people of Ometepe started to protest, although, they were much more peaceful in their demonstrations. The Costa Rica border was less than a days ride and luckily when I arrived it was open. I can only hope that things in Nicaragua get better soon. The people deserve it.

Would you go bicycle touring through Nicaragua with protests like this going on?