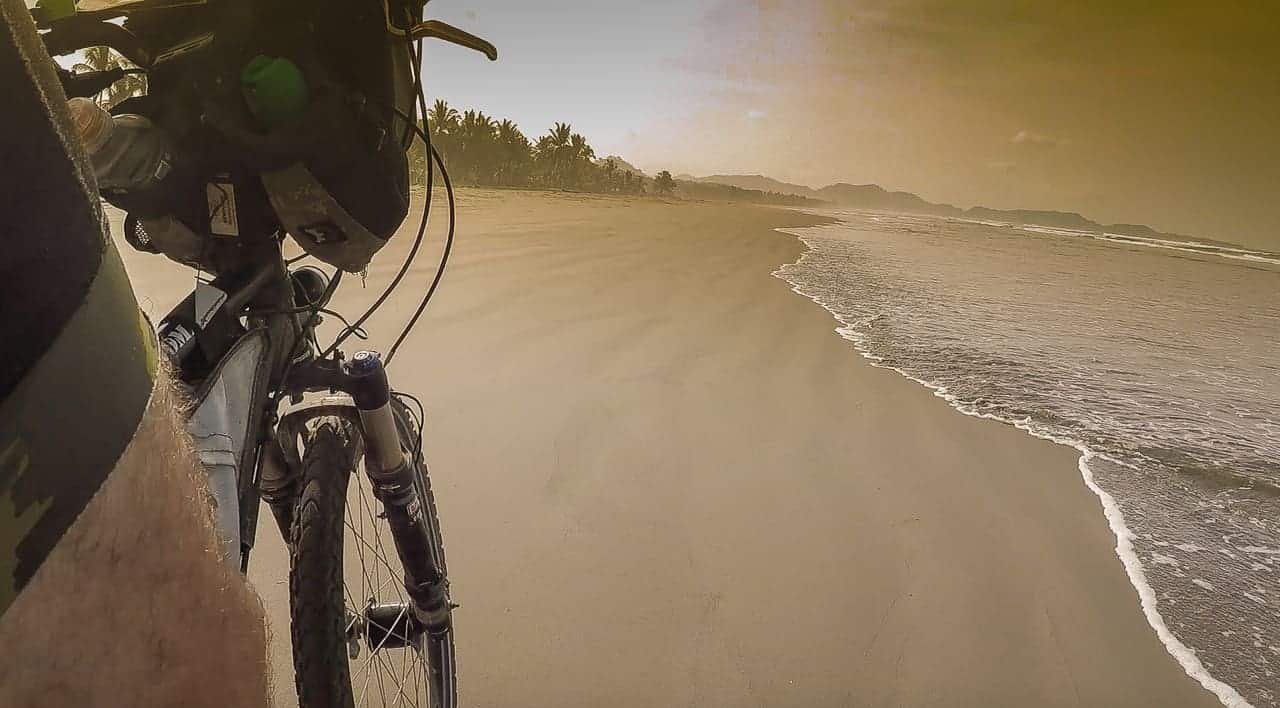 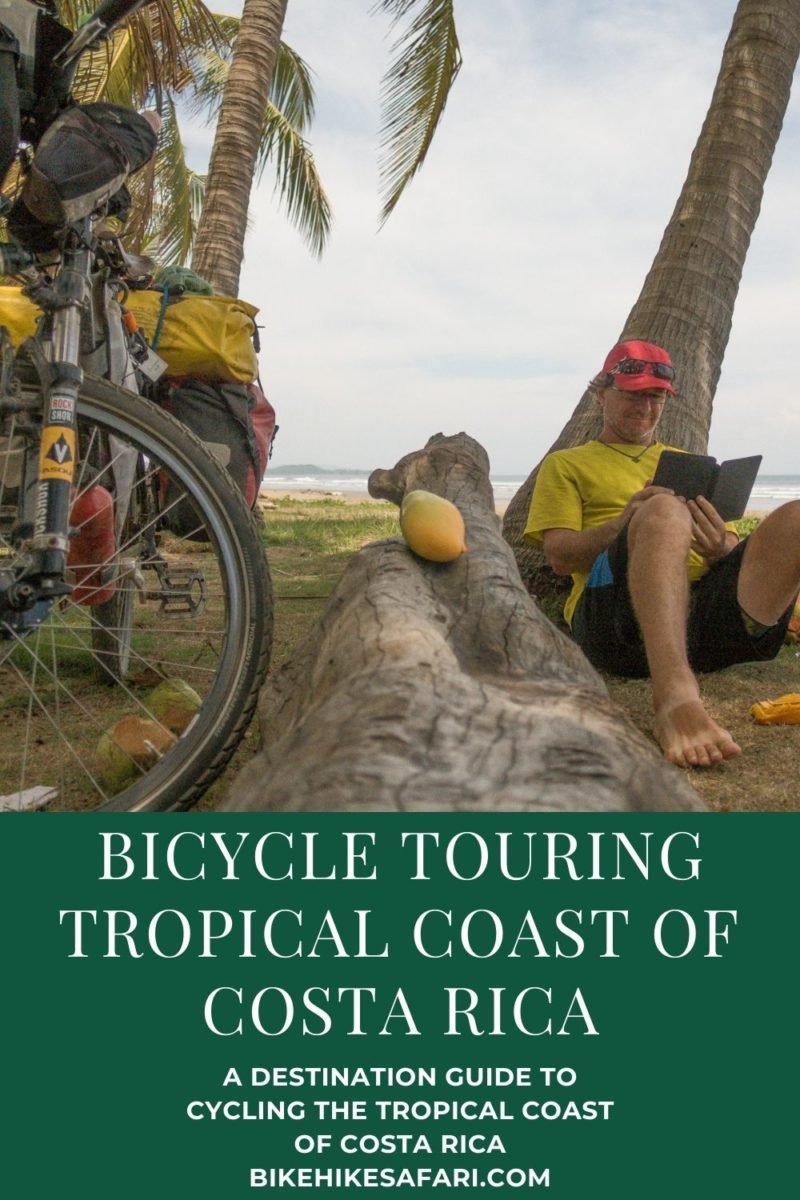 The starting point for my coastal sojourn was the hot and humid gateway town of Liberia. With little of interest for me I only spent enough time in town to clean up, resupply and hit the road.

First stop was the rather touristy place of Brasilito. Have you ever heard of people moving to Costa Rica to set themselves up in a Condo and live the ‘Pura Vida’ lifestyle. There is a good chance this is one of the many places they might have moved to.

Gingos in search of a tropical paradise have set up home bases here. A lot of the area is full of private gated communities deigned to remove the gringos as far as possible from the local population.

Gated bars, gated restaurants, gated communities. Then there are the real estate agents. It seems every second gringo here works in real estate. I felt very out of place.

I didn’t need to go far. There were literally hundreds of deserted and little populated beaches to explore. I took a road that not only followed the beach but used the beach as the road. I like how easy it is to escape another persons reality in Costa Rica. Five minutes by bicycle and I had a beach to myself and was able to take a swim with no concern about my bicycle being stolen.

There are several tools I use to find a place to stay at night but one stands above all others. It’s an app for my phone called iOverlander. Anyone who is Bicycle Touring, Bikepacking, on motorbikes or overland vehicles uses this app. Download it now, it is an invaluable tool that I use for planning places to stay or resupply.

On my route around Nicoya Peninsula every place I camped was a place that was mentioned on this app as a place to stay. All the photos below show just how nice they are. I camped on cliffs overlooking the ocean, on beaches under coconut trees and in parks near friendly towns. I only stayed at one paying campground which had showers, wifi, use of a kitchen and was right on a rocky headland where I watched sunset every night.

It was refreshing to camp in such amazing places. My bicycle touring route or Bikepacking Nicoya Peninsula Costa Rica route had some of the best camping I’ve had in many months, possibly years. It was that good. And it was refreshing for my soul to sit under coconut trees while watching the sunset. This is why I love bicycle touring. Let me know what you think about the photos of my campsites.

Traveling by bicycle allows a certain kind of freedom to roam the planet without the need to follow roads all the time. My case in point is cycling along the beaches in Costa Rica. At low tide the sand hard enough to cycle on. I reduced the pressure in my tyres a little to allow them to balloon over the surface a little better. This was all I needed to cycle on the beach. It helped that my tyres are 2.15 inch which is as wide as I can possibly go on this bicycle. Many mountain bikers and Bikepackers are using 2.5 inch tyres which would be even better.

Speaking of Bikepacking. I have slowly been lightening my gear by getting rid of excess gear that I don’t need or use. Currently all my gear weighs about 20kg not including the weight of the panniers, bags, food and water. I would love to try the ultra light Bikepacking rigs but I just can’t afford to get a new bicycle and accessories. My money is already fast running out so I guess the ultra light Bikpacking rig will remain only a dream at the moment. For now my bicycle and gear are performing well in challenging conditions.

On this route I cycled from headland to headland and joined up with the roads at either end wherever possible. Most of the beaches were deserted, but some, specially in the very northern and southern sections of the peninsula are popular tourist places. I turned more than a few heads riding my loaded bicycle down the beach.

On several occasions I found the long beaches had rivers entering the ocean part way along the beach. Sometimes they were passable, other times I had to backtrack and take the road. All part of the adventure.

Turtles lay eggs on many of the beaches in this region. Unfortunately, my travels were outside the main season for their arrival. Some of the beaches had the occasional turtle arrive to lay eggs but not too many. I didn’t see any, nor did I see any evidence that they were in the area. I searched for turtle tracks, evidence of holes being dug overnight but I saw nothing. In an attempt to be responsible, I only did this during the day, I didn’t want to wander beaches at night with a bright light, this might scare the turtles away and stop them from approaching the beach. Nobody wants to be THAT tourist. The one that does dumb things that upsets the balance of nature. Many exist, I’m trying not to be one of them.

One day I would love to be on a beach to watch a turtle laying eggs and watch the crazy hatchlings start their impossible journey. I’m not sure when, I’m not sure where but I will make it happen one day, somewhere.

The rainforest was alive. Howler Monkeys and Capuchin Monkeys owned the trees above. Sometimes it felt like they were throwing branches down at me. On a morning ride I saw the rare site of a Howler Monkey walking along the road between bare patches of forest.

It wasn’t just the monkeys, there were loads of birds. Seabirds and birds of the forest kept me entertained for hours with their melodic calls. It was a pleasure to wake to natures alarm clock in the morning.

There were crocodiles in the rivers. At least that is what I was told. Several signs also alluded to the fact. It wasn’t until I was away from Nicoya Peninsula that I saw crocs. many of them crowded into a small brown section of river near the Pan American highway.

But the most common animal sighted were cows, lots of cows. In the fields, on the roads and wandering around the outskirts of the towns and villages. Where there was no forest, there were cows.

For anyone interested in Bikepacking Nicoya Peninsula Costa Rica, I have included a map with my GPS track. I started this cycle route on 1st May, which is the very end of the dry season. Rivers had little or no water in them and at times it was brutally hot. Storms were brewing and I had several very large, very wet thunderstorms hit me when I was there. I can only imagine that a lot of this route would be either very difficult or impassable from June to November.

I camped for free every night on beaches or headlands. The only exception was a paid campsite at Malpais which cost $5 per night which included good wifi, showers and use of a kitchen. The sunsets and company of the staff and fellow adventurous travelers made it a hard place tp leave. If you want the GPX file of this trip let me know and I’ll send it to you.

Running to the Panama Border in the Rain

The wet season was fast approaching, it could be said that it had already arrived. By the time I left Nicoya Peninsula tropical storms became the norm. Usually in the afternoon the dark grey clouds would build and unleash their fury upon the poor cyclist caught out on the road. Fortunately, the weather was so hot that a tropical downpour was more than welcome. It allowed me the time to cycle without my shirt and take an impromptu shower. My small facecloth was invaluable during this section of the ride. The youtube video below will show what the rain storms were really like.

I Hate the Pan American Highway

The rain bought with it one particularly scary moment. The Pan American Highway, which I dislike with a passion, has only brief sections of a safe shoulder for the cyclist. During one heavy rainstorm I rode around a corner on a section of road with no shoulder. A truck fast approached me from behind while another was in front of me coming the other direction. Usually at times like these I would run myself off the road and live to ride another day. But there was a problem. There was nowhere to go but long grass, rainforest and scrubby bushes. Both trucks realised the problem I faced and very professionally slowed down and passed each other, and me, without incident. They left me plenty of room.

A fast approaching car from behind failed to see that the truck behind me was almost at a standstill. I heard the unmistakable sound of skidding tyres on a wet road. In an attempt to miss hitting the truck the car driver crashed through the rainforest scrubby bushes right behind me. I looked in my rearview mirror as long grass, vines and bushes went flying. There was nowhere for me to go. At this point the driver realised (I hope) that he might hit me. He turned further into the forest. I was safe. He came to a stop behind me.

The driver was probably more rattled than I when it was all over. I went back to check if he was ok. There was no damage to his vehicle. He was in a ditch and unable to reverse out. I thanked him and he blessed his maker with his trembling hands. Several other vehicles had stopped to check on everyones welfare. Ropes and vehicles were used to pull the vehicle out of the ditch. His car was undamaged but he was too shaken to drive. We said goodbye as he waited for the adrenaline to subside. This was the closest I’ve come to having a serious accident while cycling. Apart from not riding at all, there was nothing I could do to prevent it. Not a situation I like to place myself in.

Next up, I head to Panama.

Are you Bikepacking Nicoya Peninsula Costa Rica? What are you looking forward to most?