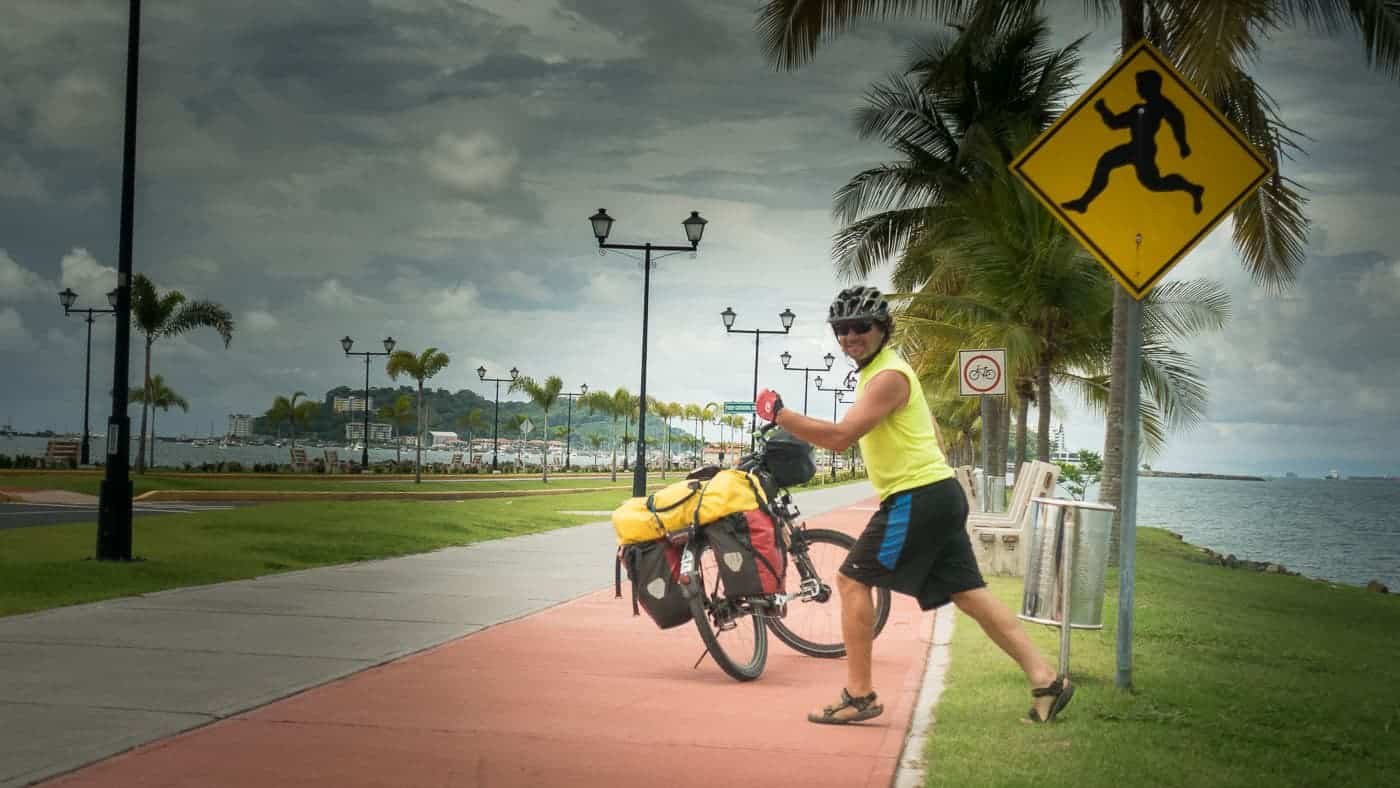 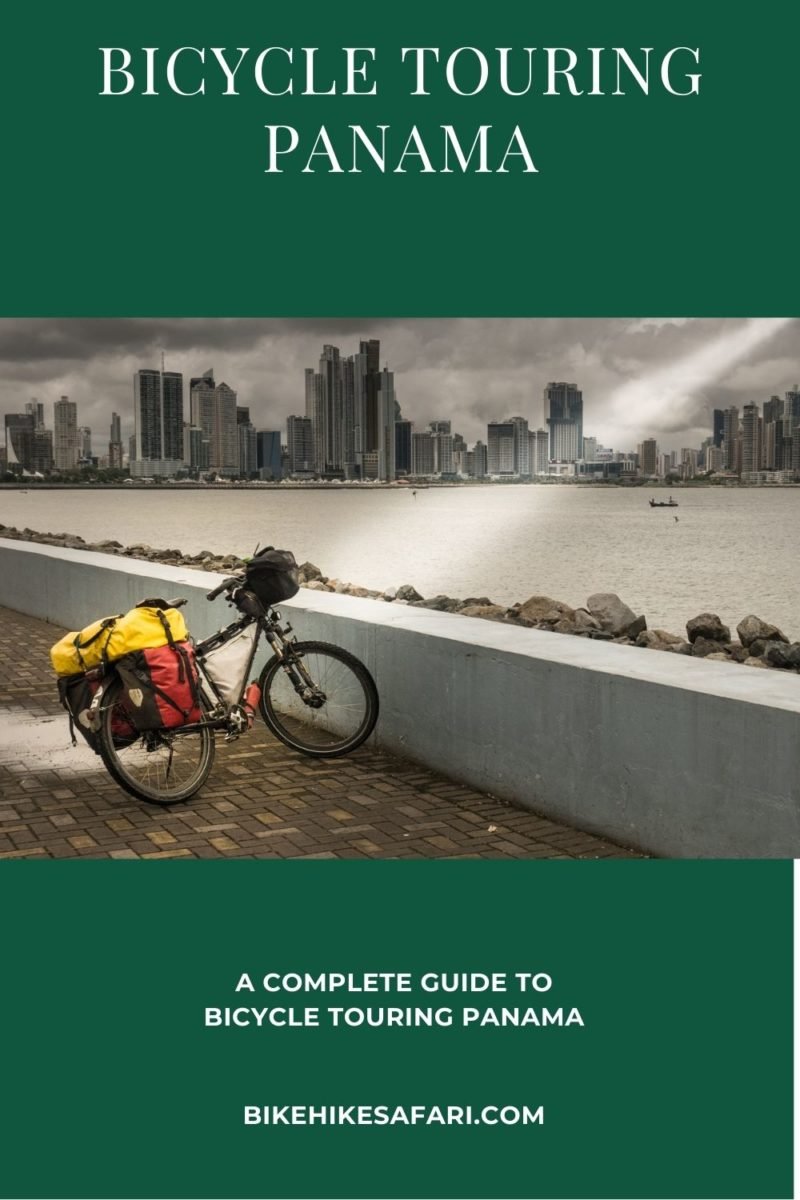 Bicycle Touring Panama was never going to be a highlight of my travels. Panama was nothing more than a transit country between North America and South America.

A short 600km of cycling through tropical heat, afternoon thunderstorms and the boring Pan American Highway. But the country held some surprises and it was not what I expected.

Crossing the Border into Panama

Officially you need a ticket out of Panama to be granted entry. Like most ‘official’ rules they are not always enforced. I was not asked for an onward ticket when I crossed from Costa Rica to Panama. The staff were super friendly and the border with Costa Rica lacked the hustle and unfriendliness of most borders. For most people Bicycle Touring Panama it is not necessary to get an onward ticket.

Arriving into Panama with a flight you officially need an onward ticket. Some airlines will not let you on the plane without one. It seems to depend on the airline and on the staff member at the time of checking in. Although, most cyclists seem to have no problem getting to Panama with a one way ticket.

While I am certainly not condoning this method, there are many that use an online fake ticket generator to bypass this issue. If using this method (which I could not possibly recommend) please be sure to make the onward flight with a different airline. Just sayin’.

Panama officials are very friendly and the sight of a bicycle will be enough to convince them that you have your own means of exiting the country. So enjoy the friendly officials in Panama.

There’s little in the way of choices for a cycling route through Panama. For most, it’s the Pan American highway, that most over rated of roads. For a cyclist it’s quality varies. Near the Costa Rica border the road is an amazing 4 lane road with a shoulder so wide it could almost be called it’s own lane. After the horrors of the Pan American Highway in Costa Rica this was a most welcome site.

As I got closer to Panama City the quality of the road deteriorated. In fact, while cycling in or near most towns and cities in Panama the shoulder seems to disappear. Only to reappear in some random spot on the other side of town. As I approached Panama City the traffic became some of the worst on all of Central America. Despite the heavy traffic the drivers were courteous and patient. Well, mostly patient, some used the shoulder as another lane only to find themselves behind me while I cycled along.

The tollway that goes from Panama City to Colon on the Caribbean coast does not allow cyclists. As this road has a generous sized shoulder in comparison to the free road I chose to ride this road. Most cyclists I know used this road. Within 5km I was pulled over by Police. My bicycle and I were loaded into the back of a Police vehicle and escorted to the free road. I then suffered yet another busy road with little or no shoulder for a long days ride.

I only stayed in hotels twice during my stay in Panama. The charmless city of David near Costa Rica and the metropolis of Panama City. I paid $15 per night at each of the hotels which is considered at the lower end of the budget scale for traveling in Panama.

I camped all the other nights. There are many Palm plantations near the side of the road in both Panama and Costa Rica. They make good campsites as they are close to the main highways, have a large network of tracks running through them and are generally quiet and always safe.

I also set up my tent on several occasions at the Terpel Truck Stop Gas Stations. The truck stops have showers, laundry, toilets, meals and a convenience store. Several of them had nice undercover outdoor seating areas. They made great free campsites but as you can imagine the trucks came and went all night. All the truck drivers were super friendly and curious about wayward cyclists.

Many other cyclists regularly stay at local Fire Stations, get invites from friendly locals (specially in remote areas), use the Couchsurfing network or the bicycle touring version of Couchsurfing called Warmshowers.

A lot of Bicycle travellers report that they travel through Panama on a budget of around $10 per person per day. My budget was slightly higher, closer to $15 per day. Most of my nights camping made it a cheap place to travel. Had I stayed in Hotels every night my budget would have been closer to $25 per day. Hotels and hostels in the lower budget ranged from $10 to $20 per night.

Traveling solo is often a little more expensive as it is cheaper to stay in hotels with more than one person. Also, I would tend to eat out for one meal per day. Most of the time this was the local meal of chicken, beans, rice and salad for around $4-5.

Produce is cheap in Panama. Fruit, vegetables and anything not found in a plastic wrapper was cheap and plentiful. Packaged foods, specially breakfast cereals are more expensive than in USA or most other countries. I guess the price of importing them plus adding the profit on top makes them costly. So like most cyclists I ate a lot of fruit and vegetables. Comida China (Chinese Food) is also a good option.

Panama is a very safe country. Even the poorer areas of Panama City felt safe to me, although, there are many reports online about problems with theft in Panama City. Overall, this is a safe country to travel.

Are you Bicycle Touring Panama? Did I miss anything? Ask me a question in the comments below?

Next : 5 ways to get between Panama and Colombia with a bicycle.