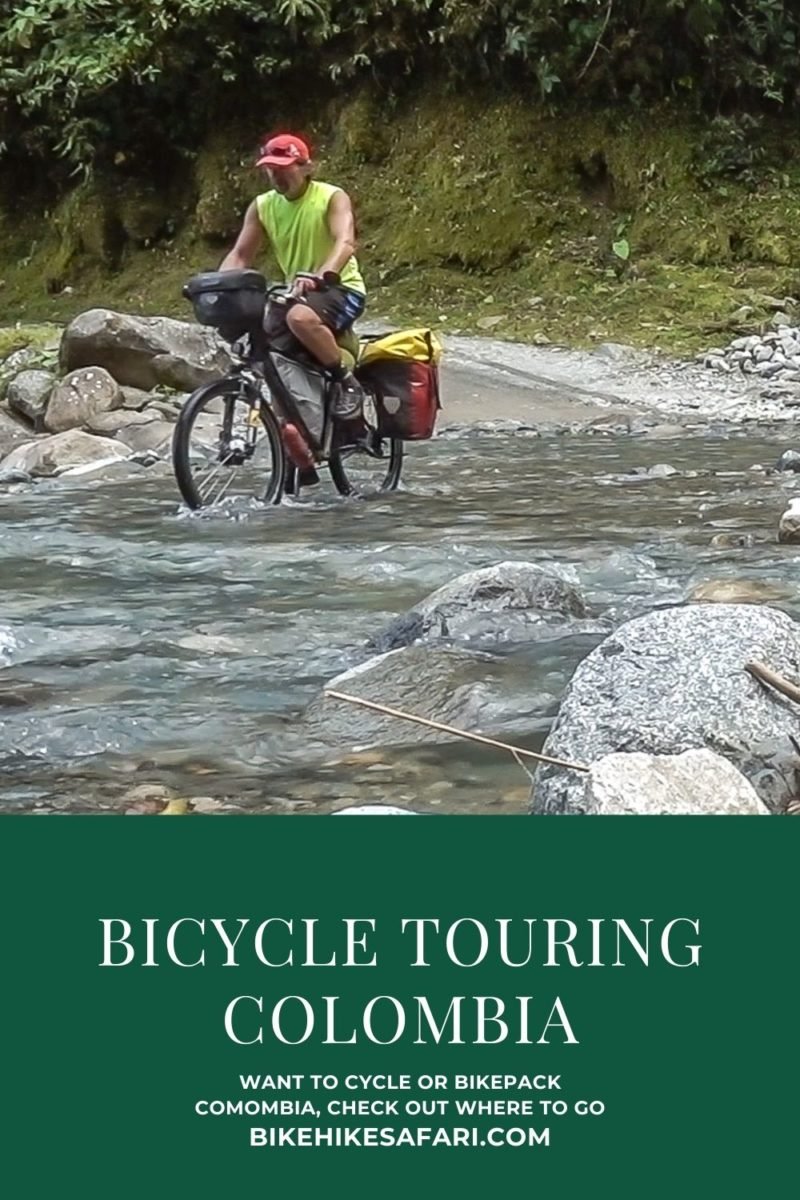 While Bicycle Touring Colombia I found myself above the clouds. My breathing was deep and laboured and my heart was beating so strong and fast I feared it might attack me. I looked to my left and saw the glacial capped peaks of the Cocuy mountain range. A small but impressive section of the Colombian Andes less than 100km from the Venezuelan border. Bicycle Touring above 4000m was tough and my body knew it. Alpine flowers and the very unreal looking Frailes plants dominated the otherwise sparse landscape. Few people visit this area. I only saw two locals on motorbikes for the whole day. Only crazy people like me ventured on this road.

It was getting late. I considered setting up camp at around 4100m. It was cold but the wind made things appear rather arctic. All that was missing were the polar bears. I settled for a several hundred meter descent to a warmer climate protected from the cutting wind. Beside the road I set up my tent and warmed myself with a hearty soup. Sleep would come easily. This is why I chose Bicycle Touring Colombia.

I had heard of Cocuy National Park many years ago. A remote national park with a small but impressive mountain range and an even more impressive hiking trail. My decision to head to this far flung corner of Colombia was to go hiking for several days. I failed to do any planning prior to my arrival in the small village of Cocuy. The trail that makes an impressive circuit of Cucuy National Park has been closed for several years. A combination of poor management, failure to consult local indigenous people, protests and poor behaviour from hikers have all combined to create the mess. I was disappointed for all of a day before leaving and climbing over the 4100m pass. It left me cold, tired and in awe of the scenery.

There are several Bicycle Touring and Bikepacking routes for the adventurous cyclist that want to remove themselves from the boredom that of the Pan American highway. In fact, if you are reading this and wanting to cycle in Colombia, please, get off the boring Pan American highway and explore the amazingness of the mountains and countryside.

The three month visa for Colombia can be very limiting and requires a bit of route planning. Limiting the rest days will give the cyclist the opportunity to ‘see it all‘, if that is the plan!

Here are a selection of recommended places that I have cycled in Colombia:

If I had more time and was cycling in the right season I would love to visit these places:

Many weeks earlier I arrived in Cartagena. After a couple of day rest I set off in the tropical heat for the modern city of Medellin. I spent several days in Medellin with the group of people I met while Sailing the San Blas Islands. My body had been warning me that it needed an extended rest for many weeks and Medellin became my location of choice. It was the time of the World Cup. Being in a football mad country like Colombia was a great experience in itself.

I also stopped off for a couple of nights at the well known ‘Casa de Ciclistas’. Manuel opens up his house to cyclists from around the world to rest, socialise and get ready for their next big cycling leg through South America. I not only got to meet one of the legends of cycling hospitality but I got to meet other cyclists and compare notes about the route ahead. There are many ‘Casa de Ciclistas’ in Latin America. What a great place, what a great idea.

After several weeks rest it was time to head into the mountains.

It’s known as the second largest canyon in the world. Tropical jungle like landscapes gave way to desert like views of cactus and all types of spiky plants. It also meant that everyday was a large climb and descent. In fact the climbs and descents were so constant and so demanding on my body I was only cycling between 25-55km per day. The extended rest in Medellin had not improved my resilience.

This northern corner of Colombia is known as the colonial heartland. Each town and city is dominated my a large plaza with an impressive church that is always the highest structure in the area. It is also the cheapest place in Colombia which suits a budget bicycle traveler like myself.

Breakfast was usually eggs served with Arepas (a cross between a pancake and baked bread) served with good coffee, Colombians love their coffee. Towns like Zapatoca, San Gil, Mogotes, San Joaquin, Soata, La Uvita, Chita came and went as I stayed in cheap hotels and guesthouses near to the central plazas. Camping was not always easy in these parts as people and houses were almost always a constant sight. When the hotels cost between $5-$10 per night it wasn’t too bad on the budget.

I reached Bogota on the busy netwrok of roads and bike paths. Cycling is the number two sport of Colombia, behind football. As a result the infrastructure is better than most counties. In fact, they close a lot of the main roads in central Bogota (and many other cities) and allow only cyclists, hikers and people on roller blades to take over the city. Ciclovia, as it is called has since spread to many other countries. Maybe overweight counties like Australia could adopt such a format to increase the general health of it’s people. Somehow, I think not in the near future!

I was granted a 3 month visa for Colombia. With only 2 weeks left I had to make a sprint for the Ecuador border. Busy roads and uninspiring views made for lacklustre cycling. Audiobooks, music and podcasts were my inspiration for many hours per day. With less than a week left on my visa I took a detour to the start of the Amazon basin to cycle Colombias death road.

It’s called Colombias Death Road. An often steep road cut into the sides of mountains that often see accidents, landslides and treacherous weather. The latter was my constant companion. Rain jackets can only take so much punishment before they start to leak. For several days I climbed out of the steamy Amazon basin back to the Andes Mountains. Despite the narrow winding road there was a surprising amount of traffic on this road.

Maybe it was the rainy weather, maybe it was fatigue but I really started to get tired while on this road. I started to dream of far away places, of hiking trails and of speaking English again. I guess it was here that i really started to question my journey and consider the possibility of a change. But what? Where would I go, what would I do? Stay tuned to find out, there might be another long hiking trail coming up soon.

Not that long ago Colombia was making the world headlines for all the wrong reasons. If it wasn’t the drug wars it was the local terrorist network, FARC. While those days haven’t completely disappeared, Bicycle Touring Colombia is a safe. Only people who have not visited Colombia in the last couple of years would say that it is unsafe. They are misinformed, believe me when I say Colombia is safe for bicycle touring and travel in general. And now is a great time to visit, before it becomes a popular tourist destination!

Map of my Route