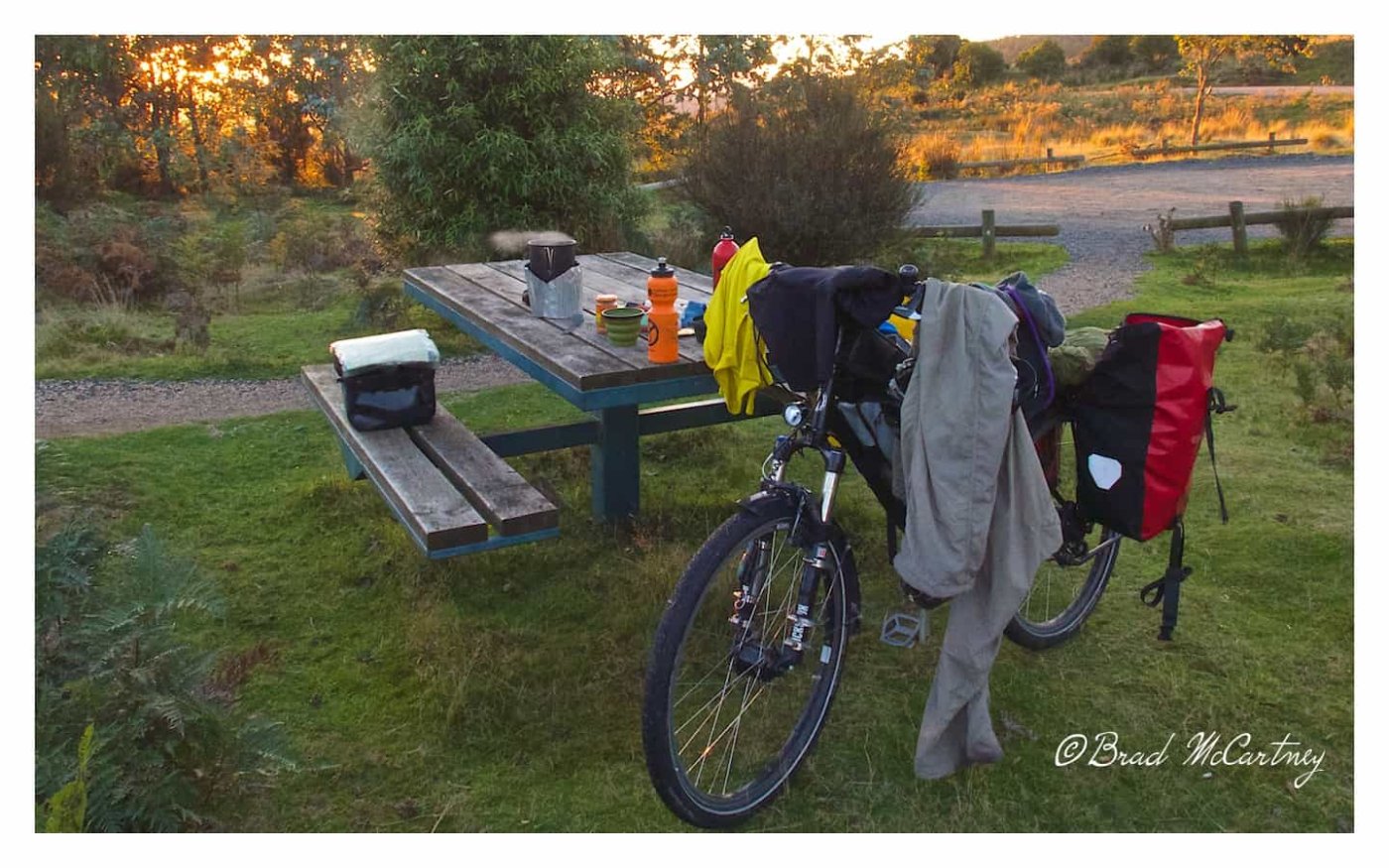 Cycle Touring North East Tasmania was really just a transit for me between the Bay of Fires area and hiking The Walls of Jerusalem area of Tasmania. Despite the weather I loved the mountains and started to enjoy the cold weather which is unusual for me.

Leaving the Bay of Fires I rode out along the Tasman Hwy on the ever upward journey to my camp at the top of the Weldborough Pass. Not much of a camp, just a sneaky spot off the road away from the main traffic.

It was a cold night and I awoke to thick cloud which moistened everything, oh and there was also the light rain that I appear to slept through, as confirmed by the puddles on the road. Not sure of the temperature but its definitely getting colder in Tasmania, at least I’m starting to feel it. The ride downhill from camp in the morning was exhilarating with a combination of rainforest and farmland until I was hit again with heavy rain.

I met 2 French cyclists on their first ever cycle tour. We chatted for a while before we all started to get cold and headed off in our different directions. Soon, I arrived at the small town of Branxholm. I went to the campsite and had a shower which not only cleaned the dirt but warmed me up.

The changeable weather cleared by late afternoon. The sun appeared so I got back on the bike. I headed for the rail trail that was about 30 minutes out of town. It went for about 15km. A bit longer in distance and time compared to the road but it was mostly downhill at a grade of about 2%.

I camped on the trail overnight and it was cold, my thermometer reading 1 deg in the morning. I continued fully rugged up in clear weather to Scottsdale bakery for breakfast. There was a short but hilly ride to my campsite at Lilydale. I realised that I have been riding or hiking without a ‘day off’ for 14 days now. I just couldn’t be bothered traveling any further.

My time in Tasmania is running out. I left Lilydale with only a quick stop in Launceston and Deloraine. I needed a day off the bike and resupply for the journey to Walls of Jerusalem where I plan to hike until my time in Tassie is complete.

Rain Trails are awesome, what do you think?
Leave a message in the comments section